THE SMITHS 'COMPLETE' - A BOXFUL OF BRILLIANCE

– A BOXFUL OF BRILLIANCE

2012 marks the 40th anniversary of nineteen year old John Maher (he changed it to Johnny Marr to avoid confusion with Buzzcocks drummer, John Maher at the time ) getting together with a twenty three year old unemployed writer named Steven Patrick Morrissey to forge what many have called not only the greatest independent alternative U.K. band of the ’80s, The Smiths, but perhaps the last truly important classic pop songwriting partnership that popular music history has seen.
Can you name another songwriting team that has come along since that tops them? 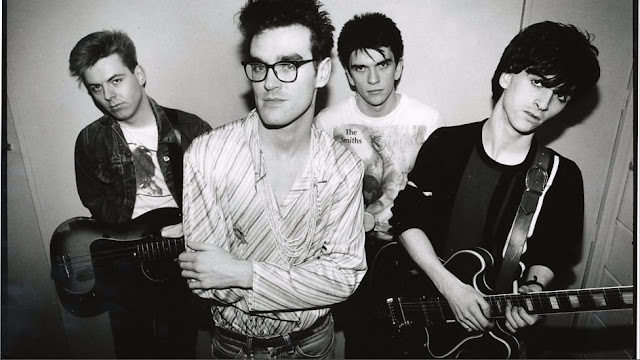 Despite any claims by fans or critics of who was the best or greatest, one thing is undeniable, that once they secured the line-up of Marr, Morrissey, drummer Mike Joyce and bassist Andy Rourke, The Smiths of Manchester U.K. found an exquisite chemistry that rang of the sublime and the catchy.

They released unquestionably beautiful music for the ages.

The Smiths left us with a body of work that hearkened back to the heyday of carefully crafted pop, Tin Pan Alleyor Brill Building songbooks of the past, '60s Top 40 classics, and still coming off as a vital and gloriously modern band.

Their name and image were steeped in a desire to downplay any rock star flash or what was perceived as the pretentious nature of other bands at the time with monikers such as A Flock Of Seagulls or Orchestral Maneuvers In The Dark , thereby keeping their name as bland as they could, and instead focusing on writing and recording extremely strong material.

Throughout the band's span, they also held a dislike for music videos with their record label releasing cobbled together videos much to the group's disapproval.


By the time they had chosen to sign with a record label, The Smiths had recorded demos for singles and had several live performances under their belt. They signed to the happening indie label Rough Trade where it was felt that they could still maintain independence and a credibility that might otherwise have been lost.
Later on, as things eventually got rough with Rough Trade, they singed to a major label for their final album.

Always a band that thought of singles as entities which should stand alone outside of long player albums, their first singles in 1983, "Hand in Glove," "This Charming Man" and "What Difference Does It Make?" would also set a pattern. Marr's stunning guitar work, influenced by '60s giants such as George Harrison in The Beatles and Roger McGuinn of The Byrds with its jangle or fluid riffs—yet never, ever a guitar solo; the locked down stability of Joyce and Rourke's drum/bass battery, and Morrissey's deliriously poetic, seemingly downbeat (but usually with a heavy dose of sarcasm and wit) lyrics which would set the band apart from any contenders.

The words of Morrissey often hinted, provoked and managed to reference literature or topical themes usually without any easily discernible meaning, although like any of the greatest lyricists, he could throw a curveball every now and again such as in the brutally direct "Meat Is Murder."

Morrissey's aesthetic for cover artwork (the cover star was always credited on any release by The Smiths) was gleaned from the same place as Andy Warhol, a fondness for actors and actresses in all their glitz and glamour, but one which also resonated with the heartaches and underlining travails that often is equated with stardom.

For The Smiths Complete, all four of the band's stellar studio albums: The Smiths; Meat Is Murder; The Queen Is Dead and Strangeways Here We Come sit alongside three compilations: Hatful Of Hollow; The World Won't Listen and Louder Than Bombs, plus their only authorized live album Rank.

The remastered sound is almost to good to be true. Without any extra gloss, or mishandled remixing, all of the albums have a pristine definition and clarity of instrumentation that brings out nuances I had not noticed before.

As perfect a remastering of a back catalog as I have ever heard and on par with The Beatles remasters.

These albums have also been reproduced as miniature cd versions of their original LP counterparts, right down to any gatefold sleeves, inner sleeves and in an insanely detailed gesture that I can fully respect, the tiny actual stickers that may have been on a sleeve stating the singles or in the case of Hatful Of Hollow, that some of the tracks were BBC Radio sessions.

Whoever made the decision on including this should be commended because it sings of the same careful attention that the audio does.

There are nit-pickers of course who will argue that this is really not everything, or a Complete box of all that The Smiths released, yes there are a few single edits, some B-sides and a few rarities that were left off, but in truth this box is the Complete U.K. LP versions that were released in the band's lifetime.

So while you may not get a shortened U.S single edit of The Smiths' most famous B-side "How Soon Is Now?" you do get the original, splendidly wonderful tremolo track in all its psych hazed glory, which by the way, does not appear in the middle of their Meat Is Murder album (that was for inclusion on U.S. versions only) but it does appear tucked away on the Hatful Of Hollow compilation.

Because The Smiths and their record label had released so many singles only tracks along with their associated B-sides, the compilations included in this box do have some overlap of songs that appear a few times. Yet, for completeness sake, this is merely a drop of water in a bucket of gold. It is as enjoyable hear a complied track as it is the raw radio sessions that they recorded for the BBC.

As of 2012, The Smiths are one of the great holdouts when it comes to a reunion.

They have purportedly been offered upwards of 50 million dollars for a reunion tour since they so long ago broke up acrimoniously and sadly sailed through a lake of lawsuits. When asked about a possible reunion, Morrissey so delicately stated, "I would rather eat my own testicles than reform The Smiths, and that's saying something for a vegetarian." 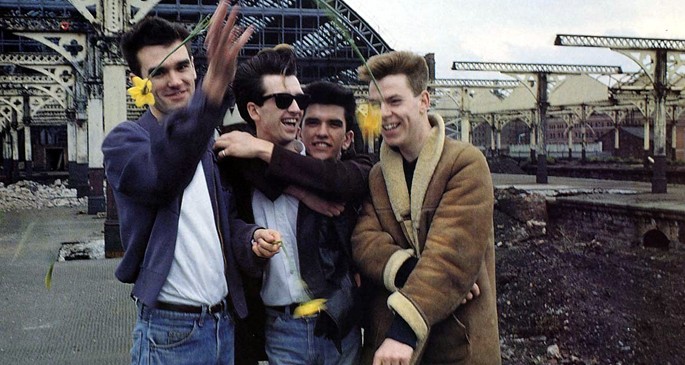 The Smiths during a happier time...


So while it may be unlikely that there will ever be any new music or live shows in the future from the band, with The Smiths Complete box set, you can dive into the riches that will always available to savor.

No matter whether you give it five stars, a huge thumbs up or a 10 out of 10, this is a collection that stands alongside the best pop music ever made.

The Smiths are one of the best examples for the argument that it takes a particular chemistry of individuals to create collective art that simply cannot be replaced, duplicated or found in a solo career.

The Smiths Complete is that chemistry showcased in a wondrous box. 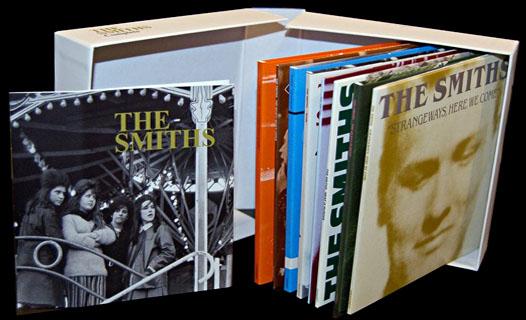