This piece was originally published September 7, 2009. 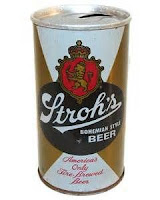 It seemed like a good idea at the time.

Have a promotional event that would increase poor ticket sales and give all baseball game attendees a nice, fun evening out at the ballpark.

Hell, it kind of worked once before, one week earlier: Same teams, The Texas Rangers vs. The Cleveland Indians.

This one was played at Arlington Stadium in Texas.

Players involved in a little forearming and face punching, throwing at the head. You know, light stuff. This time the "cheap beer night" promotion only ended with a bench clearing brawl that turned into fans hurling food and beer at various players and coaches coming out of the dugouts and a large crowd of drunken fans jumping onto the field. 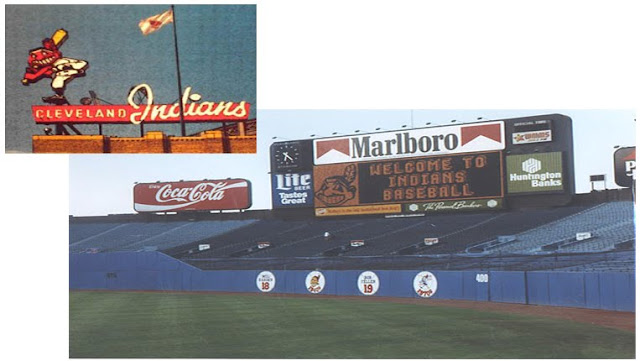 June 4, 1974: Let's up the ante. In the previous year, Cleveland Municipal Stadium attendance records for Indians' games usually topped out at a lousy 8000. "Cheap beer night" just wasn't good enough. I say learn from our mistakes and fill those seats...

2009 marks the 35th Anniversary of the worst idea in sports history:

Ladies and gentlemen, let me introduce to you, The 10¢ Beer Night 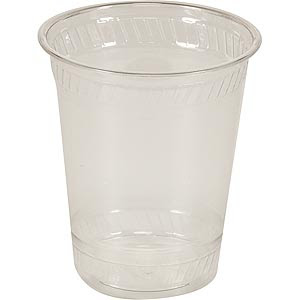 It was a simple enough plan: Folks could drink as many 8 ounce cups of Stroh's beer during the entire game for only 10¢ a cup.

You see, baseball was not in an era of what you might call the "kid friendly" or "family fun at the park" days. We're living in the safe days now. No, baseball was still a dirty, gritty game, filled with cheap thrills and with a low cost that allowed just about anyone with the gumption and a favorite team to attend a game. Oh sure, families came in droves, but these were the days of no safety belts and a dozen kids piling into the back of the station wagon, riding with the door down. Folks with money to burn were attending tennis matches and the Olympics. Baseball was for everyone, and so was beer.

Things looked bad for Indians fans from the start. The Rangers scored in the 2nd inning and kept scoring with the next few innings. The fans also started early. A female fan jumped onto the field's on-deck circle and showed everyone her breasts; a naked man ran to 2nd base while a home run hitting Rangers was heading home; a father and son jumped onto the field, ran into the outfield and dropped trousers so they could moon their fellow punters in the cheaper bleacher seats. 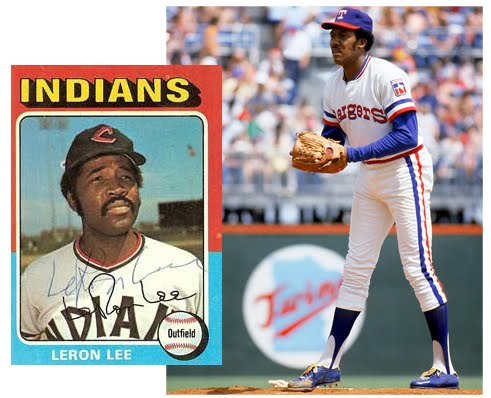 When a line drive off the bat of Indians Left Fielder Leron Lee hit Ranger's pitcher Fergie Jenkins in the stomach, causing Jenkins to fall to the ground, a huge number of fans in the upper deck chanted "Hit 'em again! Hit 'em again! Harder! Harder!"

As the suds flowed and the game remained on the losing side for The Indians, so did the out of control anything goes anger flow of an immensely inebriated packed house. A large empty jug of Thunderbird cheap wine narrowly missed Ranger's first baseman (and future famous manager) Mike Hargrove who was probably not enjoying this, his rookie season. Oh, did I forget to mention he was also pelted with spit and hot dogs as well? Perhaps all was forgiven by Hargrove when he later played for the Indians and is now on their list of the 100 all time greatest Cleveland Indians' players.

Once again Leron Lee and Jenkins factored into the ferocious gameplay when Lee, sliding safely into 3rd base, spiked Jenkins, causing the now injured Ranger's pitcher to have to leave the game. The Rangers' angrily disputed the safe call which only increased the tempers of the drunken crowd who once again, started to pelt the field with beer and other objects.

By the ninth inning the Cleveland Indians managed to rally and tie the game which was now a crisp 5 to 5. Sure, on most days, this would be enough to assuage the home team fans and allow for a calming affect that would surely provide a nice tidy ending to the game—perhaps with a walk-off for Cleveland—or even if they lost, maybe a "Kudos Texas! Job well done, good game!" tip-of-the-hat showing of good sportsmanship from the Indians' fans—most likely by now ashamed of their rude behavior and feeling the heavy "you've been very bad today" guilt that crept in from all the alcohol consumed.

Well, if it all ended so well we wouldn't be calling this a RIOT would we? 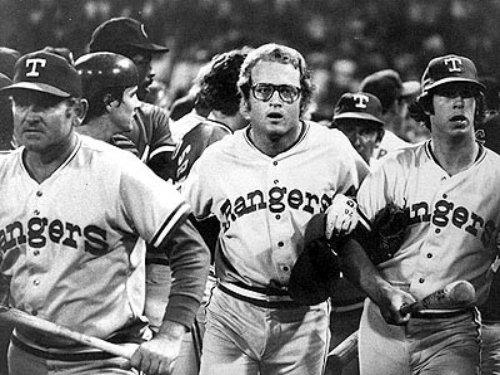 A Cleveland fan tried to swipe the cap off Rangers' outfielder Jeff Burroughs which caused Burroughs, in an attempt to stave off the fan, to trip. His manager, the legendary manager of managers Billy Martin thinking that he was hurt and in danger, gathered a bunch of his players, some with bats in hand, and they ran out onto the field to assist their teammate. 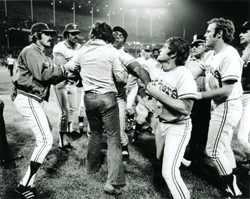 By now fans were storming onto the field from all over the place (that means rioting to you and me) with a large number armed with chains, knives, and pieces of stadium that they had ripped up. Those who were still in the stands continued with the pelting of bottles, food, spit and more ripped up stadium parts. The live telecast of the game was suspended and Indians' manager Ken Aspromonte, fearing for the lives of the Texas team, gathered his players, also now armed with bats, and rushed to confront the rioting fans. 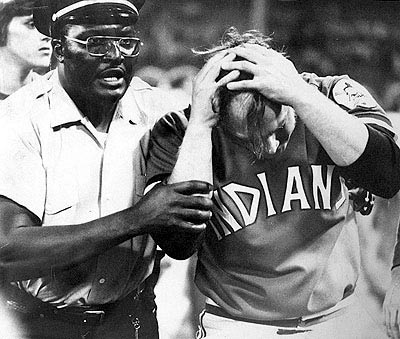 Fans by now had also begun to throw steel folding chairs at the players, hitting Indians' relief pitcher Tom Hilgendorf in the head. 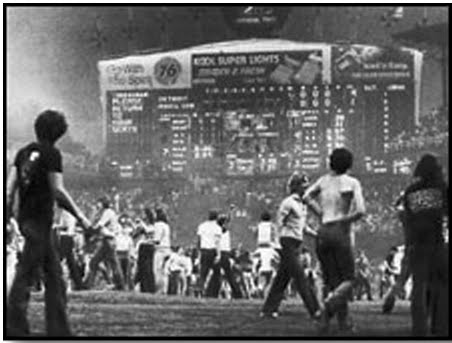 Fistfighting was everywhere between players and fans, and ironically, while things escalated, the Indians' pinch hitter Rusty Torres had been standing at 2nd base representing the winning run for Cleveland. He ran off that base. 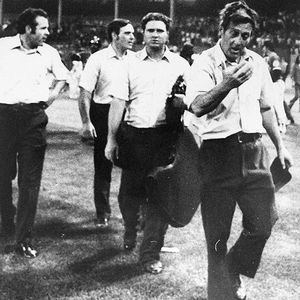 It took some time, but eventually a large riot squad from the police department was called in to make arrests and restore order, but not before the crew chief for the night's umpire team, Nestor Chylak, decided it was disaster and called a forfeit of the game naming The Texas Rangers as the winner of this 5 to 5 tie game. Chylak was probably not too enamored of the Cleveland crowd since he had also been hit in the head with part a stadium chair and been cut on the hand with a tossed rock. Famously he was quoted as saying the fans were "Uncontrollable beasts" and that he'd never seen anything like this "Except in a zoo." 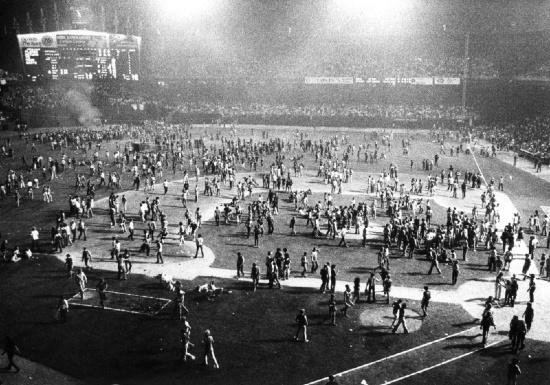 A survey of items that had been torn up, ripped and otherwise thrown, and did not include a major league baseball were: portable radio batteries, bottles, hot dogs with and without buns, rocks, cups, popcorn boxes, folding chairs and anything else that could used as a projectile. 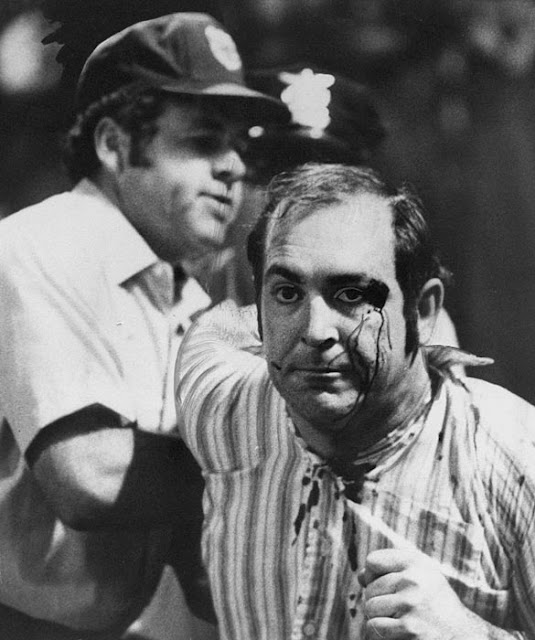 A lesson was learned as future promotions limited spectators to only four cups of of beer. Putting a capper on the amount of golden elixir you could chug tempered the need for ripping up a seat.

Comically, to this day, there is always another bright bulb in a promotions department who thinks they've come up with a pat-on-the-back new winner. Proving it's not just in the world of sports that booze+unlimited drinking=a very bad idea: In February of 2006 a promotional event was held at The Milwaukee Art Museum called MartiniFest.

The semi-formal event (which was not the museum's idea, they were merely the host location for this Clear Channel Radio for-profit fundraiser) allowed patrons to purchase tickets at $30 that would give them unlimited martinis to drink throughout the event. An event targeted at the always desirable "attractive and upscale" audience. Over 1,900 attendees paid admission to the fest. There were reports of obnoxious lines of unruly folks slamming their glasses down at the bartenders while requesting more sauce, climbing the exhibited sculptures, accosting the artwork, getting into altercations, vomiting, possibly urinating, passing out and a few sustaining injuries. A good time was had by all. When interviewed later, the Clear Channel Promotions Director (the one with the not so bright bulb now hovering over her head) felt that it was not the alcohol that caused the problems, but merely the lowered cost of the event. Cover your ass...in stupidity.