THE FINE ART OF FIRECRACKERS

THE FINE ART OF FIRECRACKERS

Growing up in the Mystery Box-land that is Providence, RI, it has always been a special treat to await the festivities that are annually celebrated on one larger than life day here in the United States, Independence Day.

The Fourth of July.

I grew up near a beach, so in actuality it was the eve of the Fourth, on the night of the Third of July that was the real party, with everyone making bonfires along the beach, and lighting more illegal fireworks than could be imagined.


The actual day of the Fourth was always reserved more for cookouts, seafood boils, parades and hangovers, with fireworks generally relegated to the larger displays by the local municipalities or baseball stadiums, and whatever scant few firecrackers were still unlit from the night before by the plebeians were casually used—making for an occasional pop and crack here and there throughout the day and night.

Fireworks in RI and MA were illegal. You needed to have someone run a trip up to New Hampshire and fill the trunk of their car, a flatbed, or the back of their truck with enough to satisfy families, friends and seemingly, entire neighborhoods. I can't recall anyone ever being arrested for using fireworks, as it seemed that unless you really put folks in harm's way, the local law enforcement looked the other way and enjoyed the spectacle like everyone else. Oh, and did I forget to mention that we had a family friend who was a policeman, and he usually supplied us with loads of firework every year.


The laws for firework use in the United States has always been a touchy mess of a state by state thing. Sort of like marijuana. I remember that sparklers, black snakes and poppers were always fine to have around, but in many states, for anything larger strict local approval was needed.

Speaking of black snakes, after you lit them, the payoff was always highly disappointing. Instead of what the artwork depicted you would unleash upon a terrified crowd: a long, fierce and venomous, creepy snake-like object, you usually ended up with a short, harmlessly ineffective, grey turd. 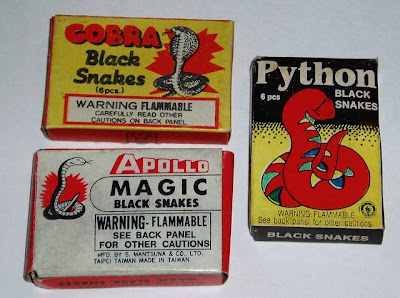 State by state, the sale of fireworks for consumer use dwindled to fewer and fewer states, realizing that the extra taxes and profits to be made outweighed any safety concerns.

Then in June of 2010, the ban was lifted in RI, as it had been in so many states before, and fireworks were made legal to sell and use by consumers.


Stores large and small throughout the state scrambled to stock fireworks for the oncoming 4th, and everywhere you saw hand-made signs happily supplying the punters willing to shell out a few clams, all manner of exploding thrill.

A glorious time was to be had for all—except of course for the sensitive ears of babies, pets and anyone else who had a particular disdain for this incendiary nastiness.

Me, I have always been drawn to the sparkle and boom of the tiny joy of individual gunpowder delights.

I even lit packs of them off many times while appearing onstage in a band!

Having had many a small firecracker blow off in my fingers, I was as comfortable with firecrackers as I was reading comic books. It was not a pleasant experience for the fingers, but seemed to be a one of the rituals of growing up.&nbsp

We called even the smallest of firecrackers "salutes," especially the small ones that came in packs, but in actually, the term is usually used more for the larger devices that we also often obtained—and believe me, these were not something you want to have explode near your fingers, head or body: cherry bombs, M-80s, quarter sticks, half sticks, and though you would now be getting into serious dynamite territory, full sticks.

I think about it now I have to say I was extremely lucky that nothing serious ever happened, so please—don't do what I did!

The earliest use of fireworks are attributed to the Chinese during the Han Dynasty (206 B.C.-220 A.D.)  who had discovered that the air pockets in bamboo would explode when thrown into a fire and left for a length of time.

The Chinese name for firecracker is Baozhu, which means "exploding bamboo".

The Chinese retained this name because once you had the invention of gunpowder and used it for a rolled up firecracker, you still had something that looked like a small bamboo-like object. The use of them originally was for scaring off evil spirits.


Tied packs of these small firecrackers were then introduced, and for the most part until the 80's, were still handmade low tech devices using black powder, and later flash powder, for the explosive part.

Much of the appeal for myself, was always the artwork on a pack of firecrackers, calling me to a world of strange enchantment filled with danger or exotic travels, with the most famous of all firecracker art being theBlack Cat brand. 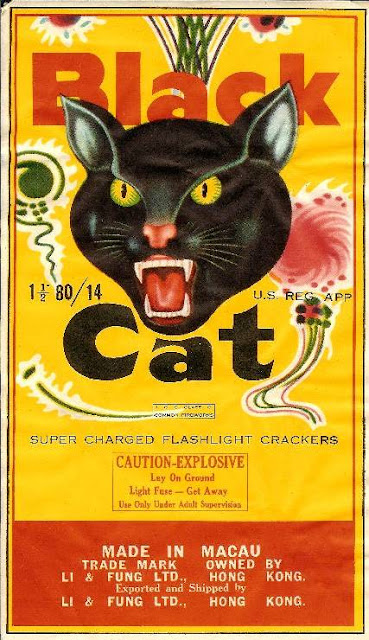 Here then, are small few of my favorite jewels of the pyrotechnics industry.

This is a tiny fraction of the number I could easily share with you. These are mostly of the vintage variety, but some, as you can see, are more recent styles, and the images should speak for themselves.

So, as you enjoy this delirious art of the "big bang,"  please sit back and raise a glass of celebration to the multitude of fireworks workers that have toiled since the 7th century, all for our simple fun and merry joy. 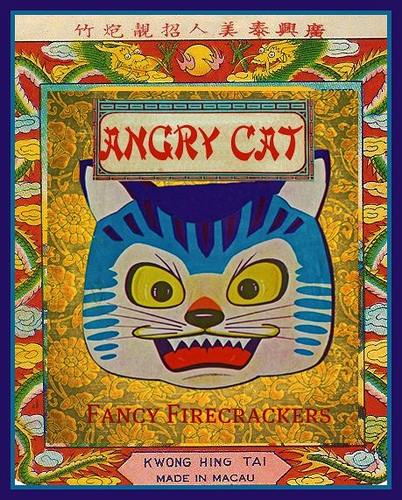 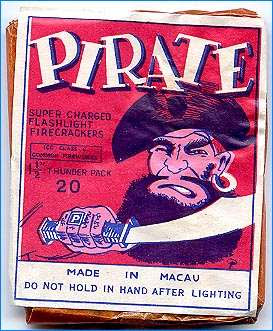 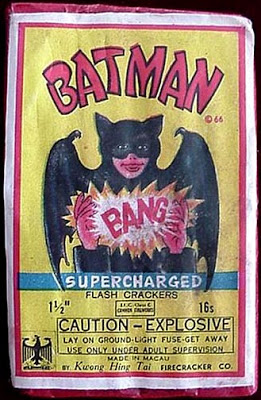 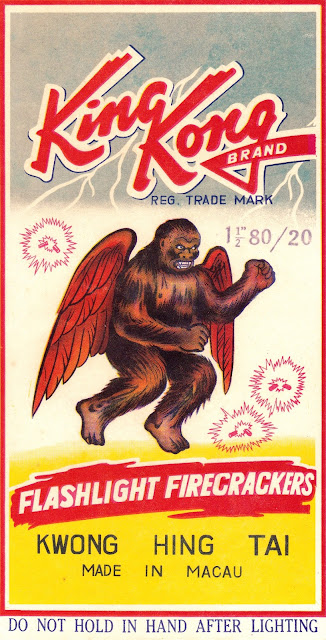 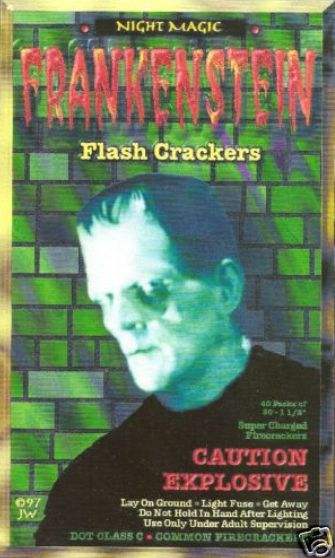 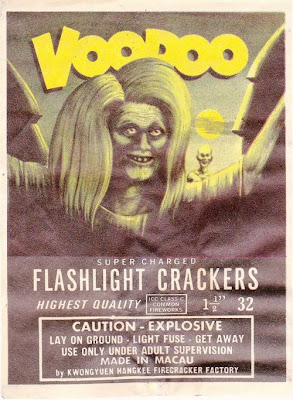 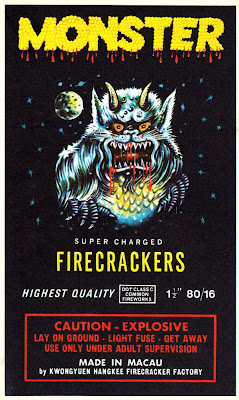 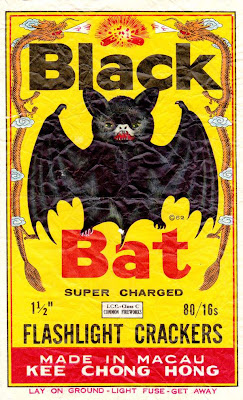 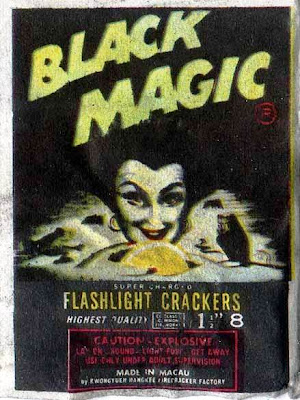 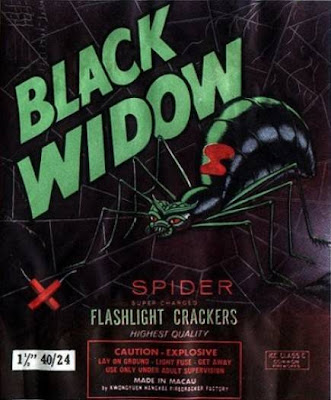 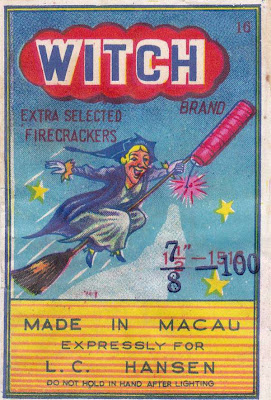 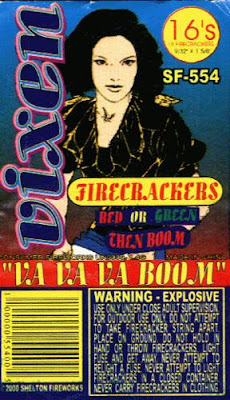 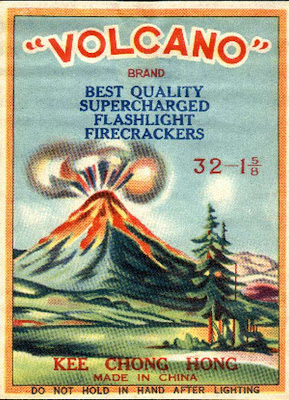 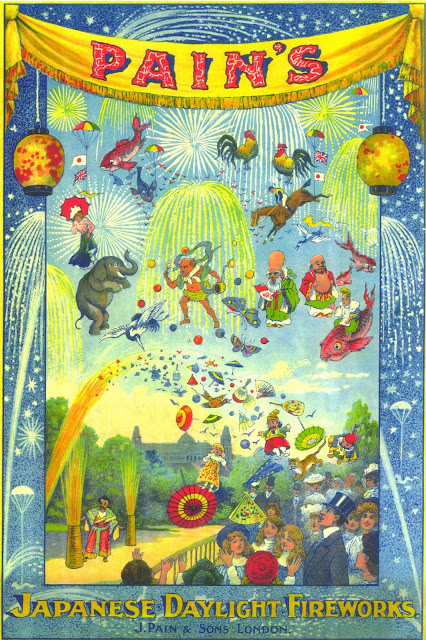 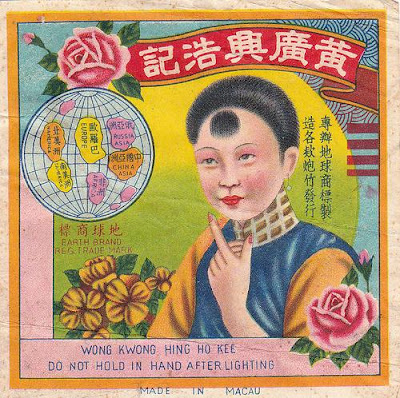 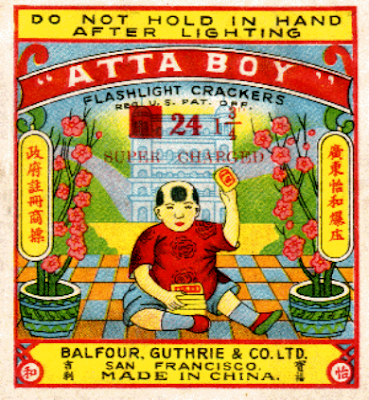 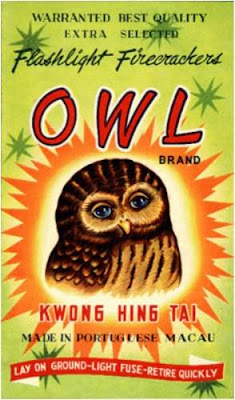 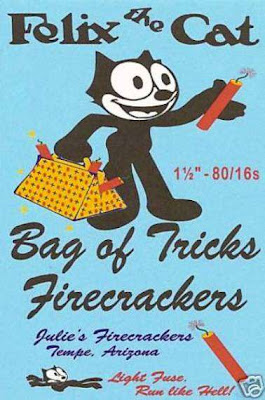 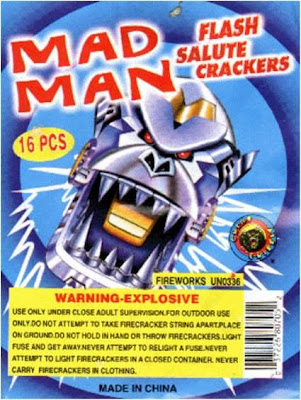 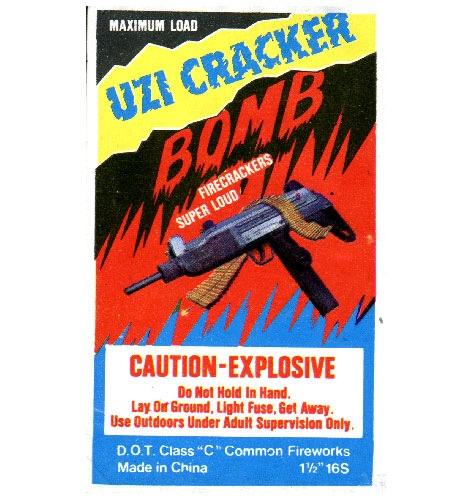 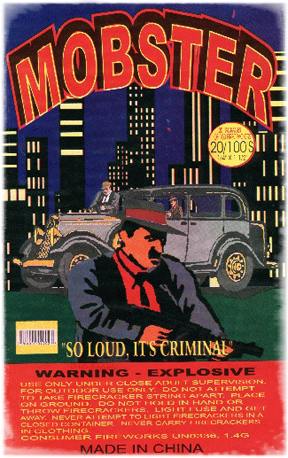 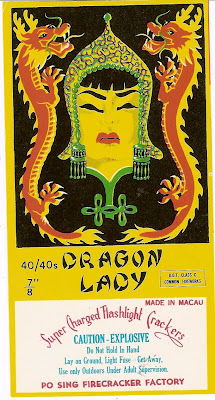 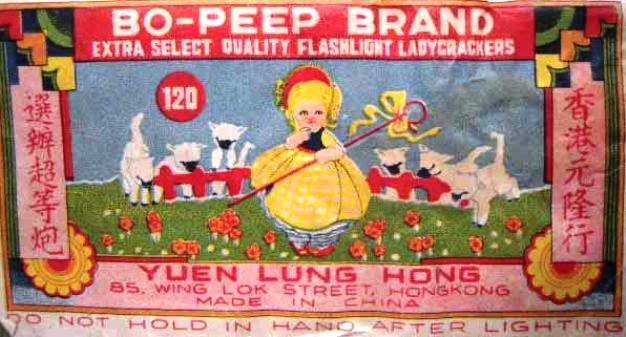 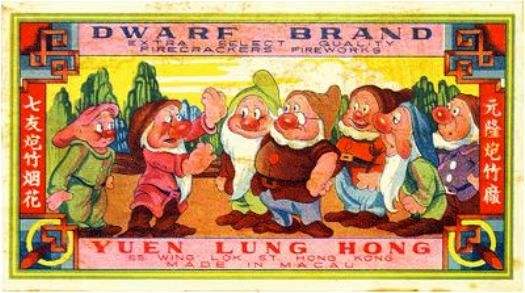