SURF ROCK GOES TOO FAR WITH THE RETURN OF SUSAN SURFTONE

WITH THE RETURN OF SUSAN SURFTONE

Nothing goes better in these warm, delightful days of the Sun, than a few road trip adventures motoring off to a little seaside vista accompanied by some wild and woolly instrumental surf rock.

Like many fans of the surf rock genre, I have never actually surfed, but since I was a child, the early Beach Boys records made an indelible impression. Like many other "Kooks," I too have been catching that mythical wave and mentally "getting barreled" for years.

More recently, I have been digging a superb practitioner of this music, Susan Surftone. She is easily one of the best boss gals to ever sling a guitar and create her own wonderful surf rock sounds.

I've written about Susan before, and you can read it here, but adding to that, here's a quick bit of background on Ms. Surftone that you may find intriguing.

Susan Surftone was born in Hudson, NY and began playing guitar, as well as taking lessons on the instrument, as a young girl. After graduating high school, she then graduated from B.U. Law School and proceeded to then became a special agent for the FBI.


After the murder of John Lennon, she decided she was unhappy without a musical life, and decided to fully pursue music. She gathered up a band and started playing places like CBGB's, a move that did not sit well with her employers at the Federal Bureau of Investigation.

She decided to quit that job and at the time, with the Pulp Fiction soundtrack permeating the airwaves everywhere featuring the original surf guitar god Dick Dale and his "Misirlou," she focused on surf rock with some garage and punk influences. This focus helped her secure a record deal with a German record label, and she then relocated West, eventually settling in Portland, OR—Portland seemed right as a laid back city with a small music scene that fostered other surf instrumental bands.

From the beginning, Susan has always been a strong advocate of encouraging girls to play guitar and start bands, and while she may be a rarity in the genre of surf rock, she now has a lengthy discography recorded with her previous bands, and including her first solo album, the excellent Shore, for which she played every instrument except the drums.

Now a second solo record has arrived—and it is equally as enthralling as Shore—entitled Too Far. 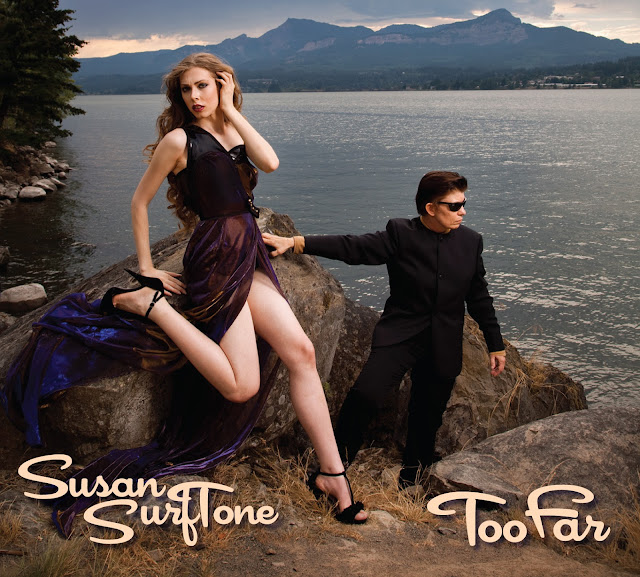 Teaming up with her creative partner/Go Go Dancer/cover model Seana Steele, a first glance at the LP's cover photo belies an influence that is as glamorous as it is multi-layered and witty.

Hearkening back to something out of the school of decadent Roxy Music LP covers, Too Far depicts a purple dressed ingenue Seana, sitting on a seaside boulder alongside a dapper Susan, with Susan sporting Elvis hair and a replica Beatles-styled black collarless suit.

The first track, "Start Again" immediately sets the album off with a lift, having a jangle that for myself recalls the early Athens, GA days of R.E.M. who at the time were themselves heavily influenced by surf music, The Byrdsand many of the early garage rockers. Another groovy track that continues this similar style is "Navy Grog."

Susan has mentioned that she tries to do something different with each album, and a fine example here features the Theremin played on "Steve Dallas," a sci-fi soundtrack-styled laid back track that is a tribute to the Bloom County lawyer who later briefly became manager of Billy and the Boingers, the fictional heavy metal band featuring Bill the Cat, Opus, and Hodge Podge.

"Green Light" is a catchy crisp rocker that recalls the early British invasion.


Too Far's final track, which is incredible, is a country blues meets surf rock ballad, "What A Shame," which turns out to be an early Rolling Stones original. Covering this little known diamond was not only a wonderful surprise as a Stones song I had forgotten, but it solidifies Susan's willingness to take chances with material and surpass any expectations of what a surf rock album can or should be. This is the same type of thinking that will ensure that her music will one day be as classic as those artists of the past that have influenced her.

Too Far is yet another step forward in making another superlative album in the surf rock genre but also continues Susan Surftone's evolution as an exciting artist willing to take on other styles and incorporate those styles into her music.

This is yet another highly recommended slab o' wax!

I mentioned above about the surf rock music scene out of Portland, and a great way to experience some of the bands from that city is a compilation called PDX A Go-Go: Making Waves Up North, a ten song live collection recorded during the summer of 2012. 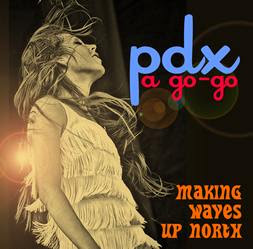 The featured bands are WaveSauce, The Surf Weasels, Shade 13, The Outer Space Heaters, and Susan Surftone.

Not only are all of these bands firing on all cylinders as live acts but this comp also perfectly showcases how surf rock has its various styles within the genre.

Here you can find some spooktacular and eerie elements that lean towards a Munsters vibe,  as showcased onWaveSauce's "Phantom Strut," the laid back sci-fi B-movie soundtrack Theremin instro that is Susan Surftone's"Rock Candy" and the Gringo twang Spaghetti Western blast of Shade 13's "Tucu's Law."

From start to finish the album is a shaker of dynamite!


PDX A Go-Go: Making Waves Up North is available at www.acmebrothersrecords.com

More info on Too Far by Susan Surftone, as well as a listing of her extensive discography, can be found at http://www.susansurftone.com/
on October 07, 2013