Surf Music.  For folks who have heard of this musical genre, often what immediately comes to mind is the early music (and often album covers) of The Beach Boys, and doubtlessly the "King of All Surf Rock," the incomparable Dick Dale, whose music and songs are equated with that iconic lonesome surfer image, such as the one depicted on the film poster for 1966's Endless Summer.  A music to go with images indelibly etched into our conscience

While few people will probably ever climb onto an actual surf board, and many have absolutely no interest at all in anything related to these polished boards, whether it be surfing on them, learning about the culture, or issuing the cries of "Cowabunga!"—except of course loving some visits to a site of surfing, namely an oceanside beach for a warm vacation—there is nevertheless very much to enjoy within the music that has taken a name from this sport.

Approximately three generations of surf rock music makers have appeared beginning with Dick Dale who really defined the genre in the early '60s. One of surf music's current practitioners has not only led a surf combo for many years, but swims against any of the notions that surf bands are relegated to the male mammal only. 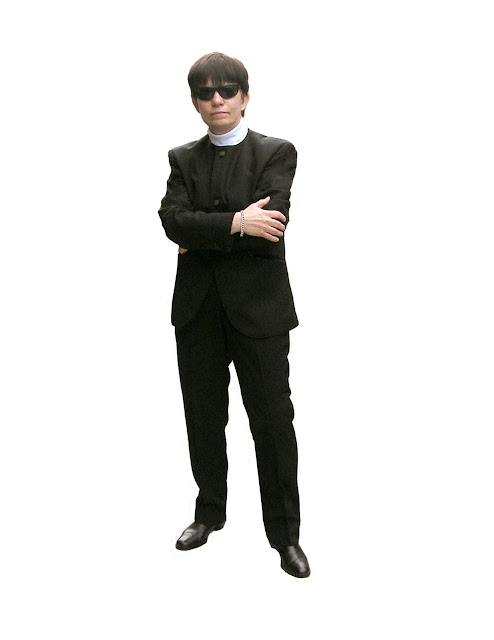 Portland, Oregon's Susan Surftone is a former real estate agent and attorney who has led her own stellar group, The SurfTones, through many many album releases—at least thirteen—as Susan and The SurfTones.

From Without A Word (1995), Thunderbeach (1996) and This Ain't No Beach Party (1999) and onto later classics like 2007's There She Goes Again—Susan and The SurfTones Play The VU (Velvet Underground), Susan has stayed the course of her sound without tiring or endlessly repeating any cliched version of what in the wrong hands could become something dragged out and beaten into the sand. 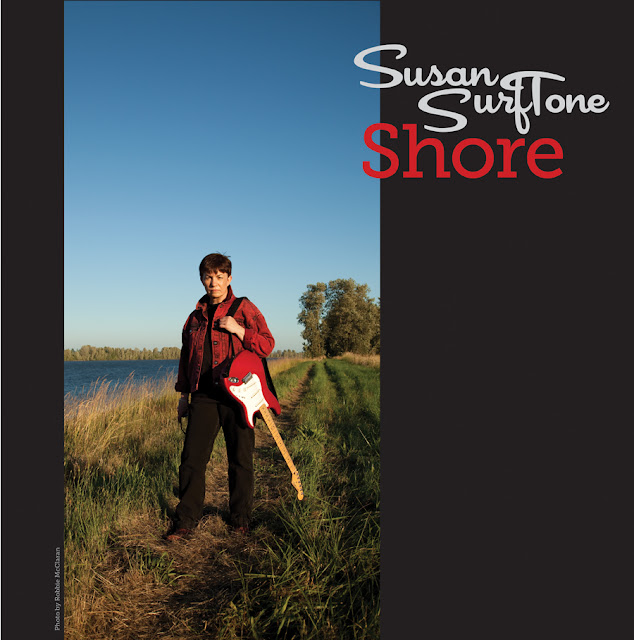 An instrumental album, Shore is a wonderful melding of both a familiar surf rock sound along with a less expected garage punk/trash rock sprinkling on some tracks, so that the album lifts everything a leap away from the predictable, becoming something that sparks my ears which always love a well worked fresh juxtaposition of genres.

The first track "Shore" is immediately a classic for me. This great track really kicks off an equally splendid album with an almost Eric Burdon and The Animals influenced bass/organ intro riff, and while never sounding like a replica of the '60s, is just the right nod to that era so as to bring a listener forward with interest into the rest of the album. 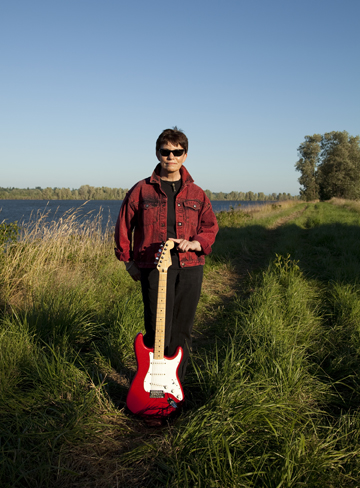 While all of Shore's tracks may consist of one word titles: "Tide," "Compression," "Agate," "Seduction" or "Late" for example, don't be fooled. The palette and variety of sounds, along with the complexity of instrumentation often used—some rolling drums here, a few echoed cymbals there—allow Susan an original freedom for these songs that belie their simple naming. Susan's roots span from The Beatles to Punk Rock, so you never know what elements of these influences will pop up.

On Shore, Susan never tries to "shred" à la Dick Dale, while playing her lead guitar lines, instead keeping things at more of a pace that moves the compositions along. If things get perky, it would be more in keeping with a garage rock tempo or her love of The Ventures, all equally exciting but thankfully never straying into any "look at how freakin' great I am playing guitar" territory.

To say that Shore is only an album that will be relegated to a niche of fans who are into "retro" sounds, would sadly overlook a wonderful and exuberantly new combination of instrumentals that could as easily work in film soundtracks as they could provide for making your morning commute enjoyable.

Catch a wave? Sure why not, but with Shore, you more than likely might end up taking a trip to Gilligan's Islandto hang with The Professor, Ginger and Mary Ann for a groovy—and rocking—Scorpion Bowl party!

Shore can be previewed and purchased in a variety of mediums at the official web site for Susan Surftone.
on October 07, 2013