I WAS A TEENAGE FIGURESKATER...!!

I WAS A TEENAGE FIGURE SKATER...!! 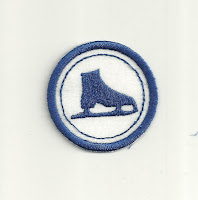 It's always great to see each of the world's varied nations send their finest athletic representatives to volley for a gold, silver or bronze medal and the bragging rights that go along with it. Over the top commercialization not withstanding, the Olympics still enchants and delights me with a certain innocence about the whole thing, and I wish it were an every year event instead of just once every four years. 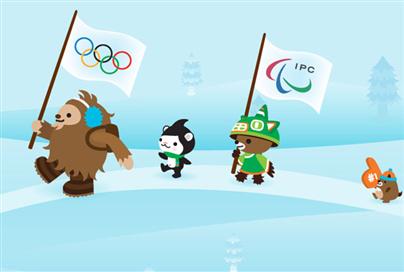 Your hosts/mascots for the 2010 Winter Olympics: Quatchi, Miga, Sumi and Mukmuk 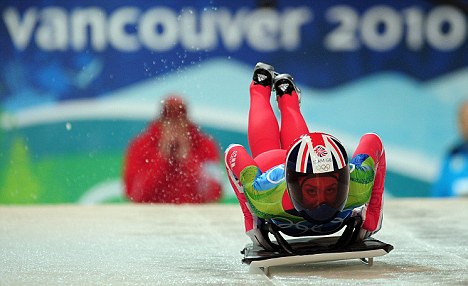 This being the Winter version, I have been especially drawn to the insanity that is the Skeleton, the Luge,Snowboarding, Bobsleigh, the Biathlon, Speedskating, Curling, and of course, the usual suspects that are Figure Skating, Skiing and Hockey.

Seeing the skaters brought back many thoughts of ice from my childhood times spent as a kid growing up in New England. Some of these thoughts were filled with a wonderful sense of nostalgia, while others the horror of remembering my attempts to master the, how should I say, Blades Of Glory.

My neighborhood pals and I were pretty much into whatever seasonal sports came up. If it were Summer, we had baseball games, Fall brought on football and "hoop" while the most fun of all was in Winter with our street hockey games. 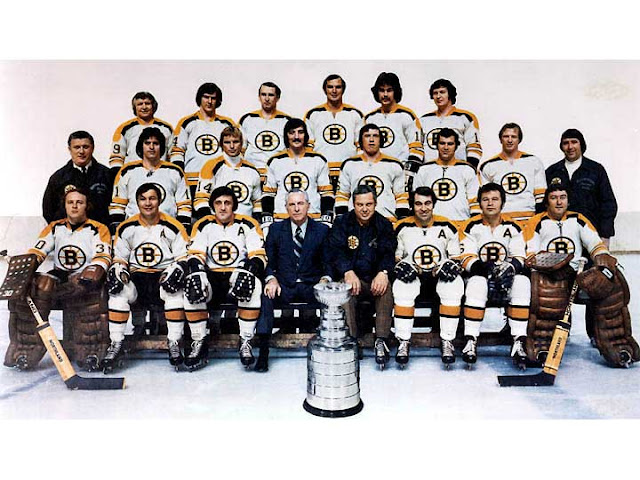 At that time, hockey was the king because the Boston Bruins were actually winning La Coup Stanley. Sure we had the New England Patriots, but they were relegated to bottom of the barrel status (in fact most of us had our football Quarterback heroes in the then currently winning teams such as The Pittsburgh Steelers, The Miami Dolphins and even The New York Jets—perish the thought now).

We were all huge fans of baseball via our beloved The Boston Red Sox as well, but to be honest, how excited could you be in those days when decades and decades of loss had made you feel fairly pessimistic about their yearly chances at winning a World Series? 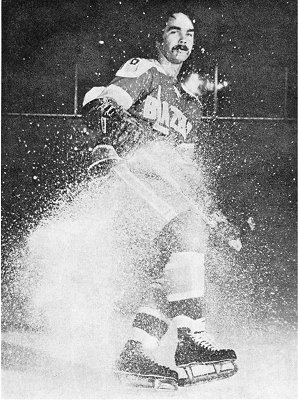 Street hockey was really where it was at. Afternoons and evenings after school, as well as being lucky enough to also play in school as part of our Phys Ed classes, we would set up our goal nets in the middle of the street, and whack that "puck" (a rubber ball) around for hours imagining ourselves to be the next great Bruins' star player: Bobby Orr, Phil Esposito, Gerry Cheevers or for myself, Derek "The Turk" Sanderson, who seemed to get into more fights in a game than there was game time itself.

Yes, I really wanted to be an actual skating-on-the-ice professional hockey player in the worst way. 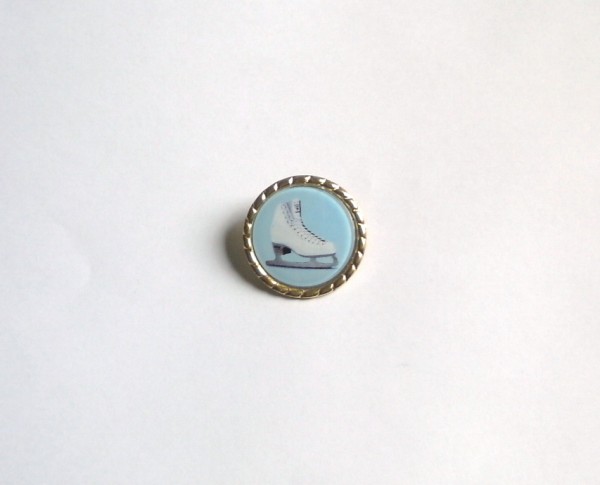 This did not go down well with my folks who thought it was far too dangerous. So the solution, thanks to a suggestion from my best friend's mom, was that we take figure skating lessons at the nearby ice rink instead. This way we still get our skating on ice fun but with a controlled, no checking someone mercilessly into the glass, means of harmless safety. 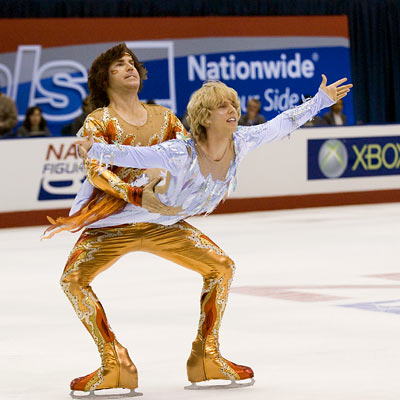 I struggled with that class for the entire run, having to learn my "figure eights," "spins" and the other not so graceful movements—and then do them all while skating backwards! Most of these I have now conveniently blocked out, as much as I have blocked out the exact age that I was taking this class, somewhere between the age of 10 and 14.

I swear the fact that my equally inept buddy and I made it all the way through and received our cloth "badges" for our efforts was due to the instructor taking pity on a couple of talentless kids who would soon move on to Godzilla and the Creature Double Feature instead. 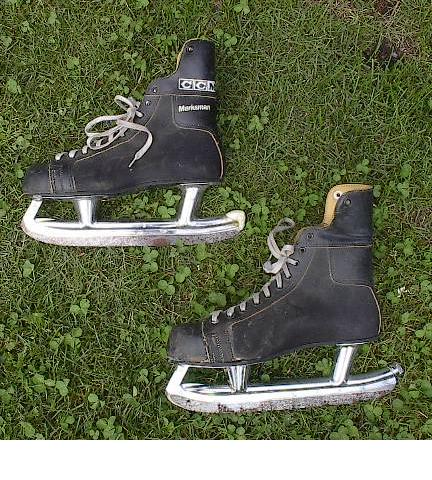 Yes, any dreams of becoming a decent skater, nevermind a skater in the profession of playing hockey for salary and stardom, were for once and for all squashed into that frozen water. I sucked skating on the ice then, and forever after. While I still worshiped, and to this day love the game of hockey, never again would I feel the need to pursue it either as hobby or career. Roller Skating, inline skates and rollerblading are out as well.

So back to the Olympics. I saw an interview with the winner of a Gold medal for Figure Skating, the U.S.A.'s Evan Lysacek, who stated that he had always wanted to be a hockey player as a kid since the time when his grandmother bought him his first pair of skates for Christmas. His parents, thinking it was too dangerous, pushed...or should I say encouraged him to enter the world of figure skating instead.

The other night, watching Evan's Gold winning and performance/upset against the favorite, a madman/Russian skater named Evgeni Plushenko, in the Men's Free Skating, I recalled my own experiences with the world of skating, of course without Evan's happy and prosperous end results. I'm happy that it worked out for him, and yet I wondered if Evan still held a slight bit of resentment or at the very least a secret wish that he could become that hockey player he once desired to be. 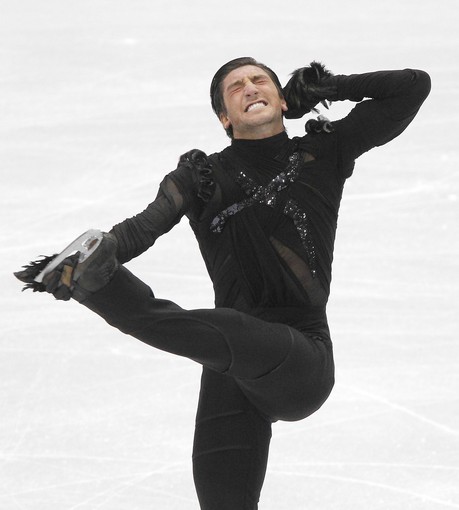 Seeing Evan, resplendent in his black leotard, with a fake snake wrapped around his neck and shoulder pads as high as the sun, I realized that yes, I too briefly entered this glamorous and glittering world and shared a few things with a great Olympian.

Funny how we each took a wrong turn at Albuquerque... 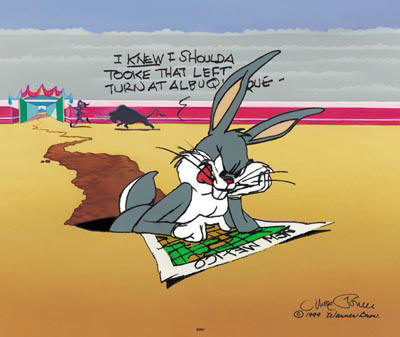