GENIUS BEFORE THE ARTIST: Michel Hazanavicius And His OSS 177 FILMS

GENIUS BEFORE THE ARTIST:

Michel Hazanavicius And His OSS 117 FILMS

Michel Hazanavicius' The Artist has been garnering award after award and may very well end up sweeping the upcoming Academy Awards
— well it should in any case.

Easily one of the best films that I have seen recently, I can honestly add it to the list of my favorite films of all time.

This story of a great fan fave silent film actor facing the oncoming changes that came with the new talkies era, is such a wonderful, skillfully crafted and entertaining homage to cinema's past, that it will doubtlessly continue to snowball into a huge mainstream success, and deservedly so.

The genius of Hazanavicius' filmmaking did not begin with The Artist however.

Two of the films he directed right before were equally as entertaining and attention should now be turned to them by anyone that has become smitten with this, his most recent release... 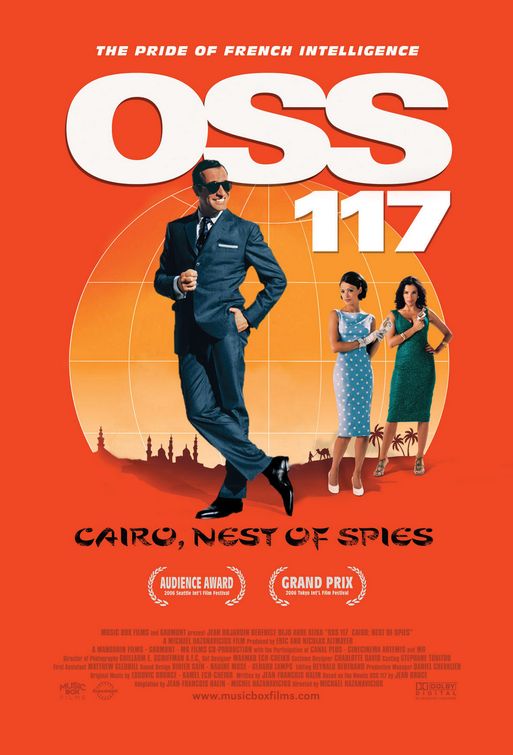 These films, OSS 117: Cairo Nest of Spies (2006) and OSS 117: Lost In Rio (2009) both star the incredible Jean Dujardin (up for an Academy Award for Best Actor for his lead role in The Artist) as Hubert Bonisseur de la Bath, one of France's top secret agents. 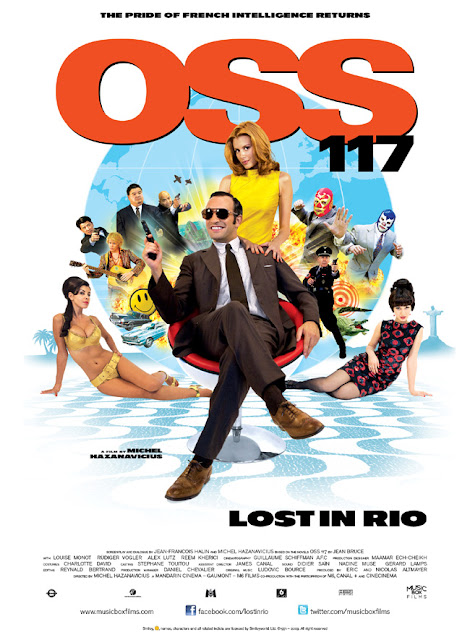 OSS 117: Cairo Nest of Spies also stars Bérénice Béjo, (who I predict will win an Academy Award for Best Supporting Actress for her role in The Artist) for yet another incentive to check out the first of the two films. 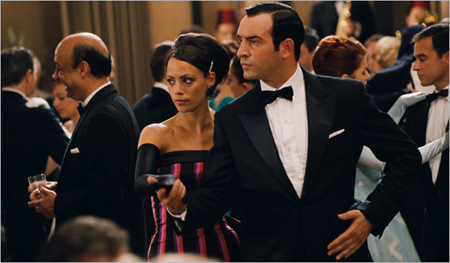 As a side prediction, it is only a matter of time before she is listed everywhere as one of the world's most beautiful and talented actresses.

The two OSS 117 films are spoofs that are about as funny as you can get, as well as brilliant homages to the Eurospy genre which was rampant throughout the sixties and seventies in the wake of the Sean Connory 007 Bond films.

While these films continue as successors to the previous series of OSS 117 films they depart into an absurdly comical take-off of those, the James Bond films and all manner of spy and espionage cinema, while at the same time not quite as slapstick in-your-face as the Austin Powers films are. 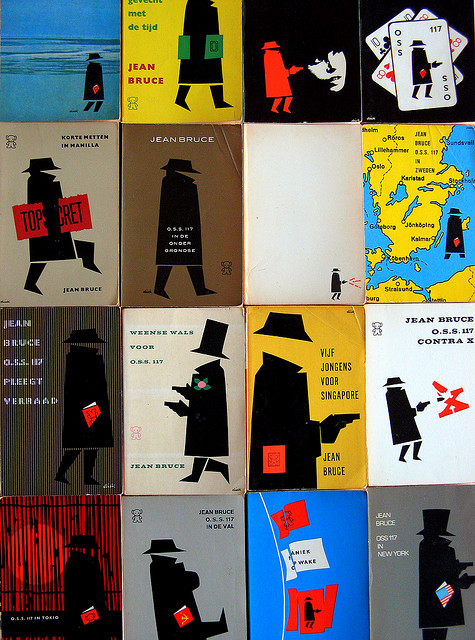 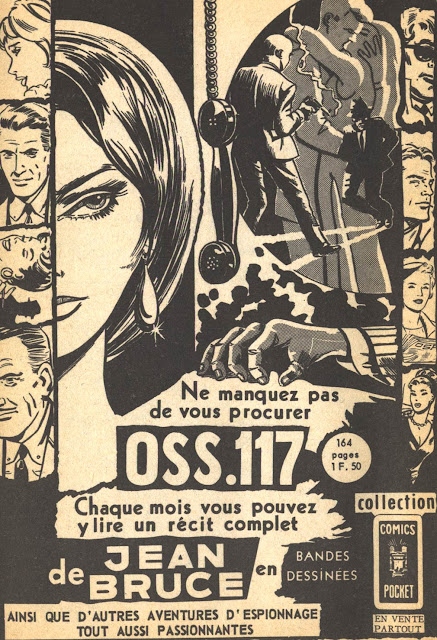 The OSS 117 character actually predates Ian Fleming's Bond by four years, as a creation of the author Jean Bruce, who penned 88 OSS 117 books. After his death another 143 novels were written by his wife, as J. Bruce, until her retirement. 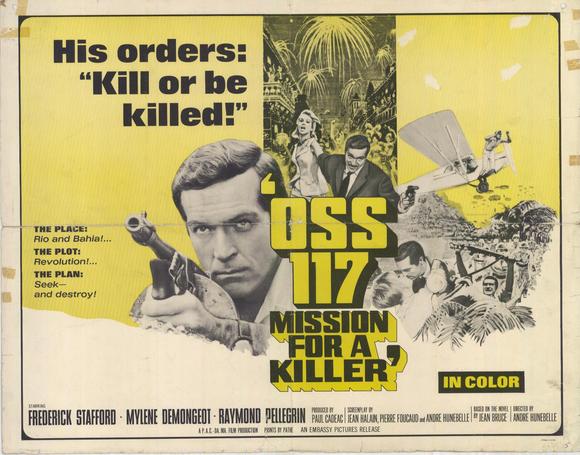 Between 1956 and 1971 there was also a total of eight OSS 117 films that were made based on these books with one a television movie.

Jean Dujardin's portrayal of Hubert Bonisseur de la Bath shares some of the inept bumbling qualities of another legendary sleuth, Inspector Jacques Clouseau. Like Clouseau, he still manages to come out on top as a number one agent solving a case.

Unlike Clouseau however, an actor such as Dujardin, with his leading man qualities and Sean Connery type looks, (something you might not say about Rowan Atkison as Johnny English or Mike Myers as Austin Powers) he is afforded a believability that he really would be a spy traveling the world as a jet-setter on some foreign adventure amidst a cadre of beautiful women and exotic locales. 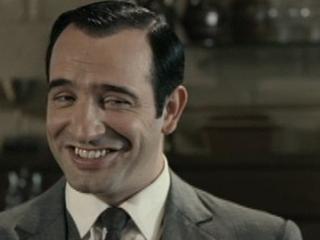 To us the audience, Dujardin's infectious laugh and award-winning smile are something to behold—not to mention his many bits of uncomfortable and thankfully inappropriate humor—easily making these films a notch or two above any similar spoofs that have been done before or since. 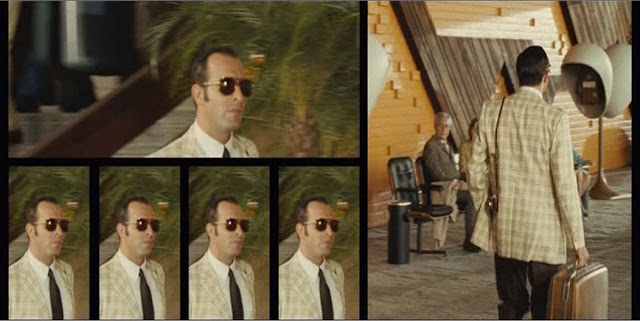 Under Hazanavicius' direction, there is a meticulous attention to details: he sharply chooses to stay within his select time period color scheme, uses a superb soundtrack, split screens (and then some!) that are beyond hilarious, and all the cars, costumes and architecture to bring to life a world that is so perfectly Eurospy, you have to shake your head in marvel, or better yet laugh. 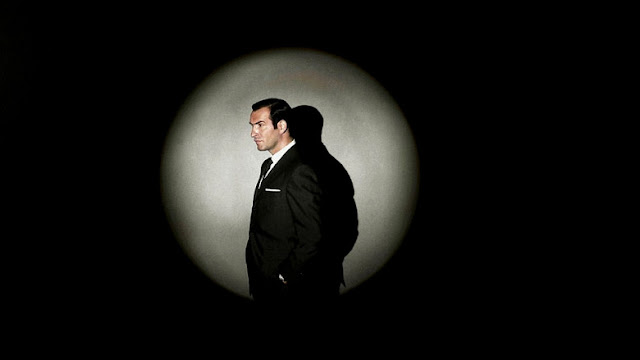 I have a collection of many many films from the Cold War spy genre, from spoofs to straight up action adventure, and right up there with some of the finest, for something as indelibly cool as say James Coburn's Our Man Flint, I recommend these films.

To not only mine a familiar territory and make it work at all, but to do so in such a richly rewarding way, speaks for the talents of the director, his cast and crew. 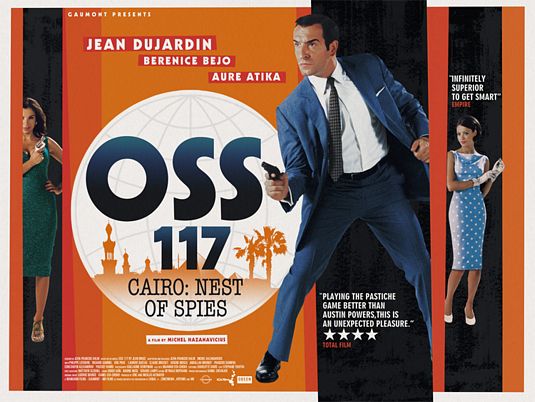 After setting such an outstanding course with  OSS 117: Cairo Nest of Spies and OSS 117: Lost In Rio, it makes perfect sense that Michel Hazanavicius could craft a meisterwerk of proportion that is The Artist.