Finally...Ladies And Gentlemen, The Rolling Stones!

Ladies And Gentlemen, The Rolling Stones!

Three years onwards, from the tragic circumstances that made The Altamont Speedway Free Festival of 1969 such a disastrous black mark for its headliners/organizers, The Rolling Stones, 1972 would be the first time back for a large tour of the United States.

They would not be performing "Sympathy For The Devil" however, because of the (wrongly thought, but it seemed like a cursed tune to many at any rate) negative connotations associated with the murder at Altamont, again in the U.S. until at least 1975.
Now, embarking on a large tour to promote their recently released double album, Exile On Main Street, which was released in May of '72 to mostly glowing reviews, they had surrounded themselves with a huge entourage of friends, associates, gal pals, and hangers on, and subsequently the tour was dubbed the STP Tour (Stones Touring Party). 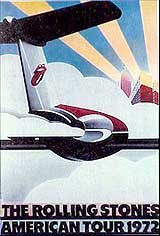 This tour would be the first to be covered by legitimate serious writers, and overall The Stones were now elevated, really for the first time, to that of a world class entity of household renown, including a now jet setting global superstar in Mick Jagger and earning the band the moniker for which they are still known, "The Greatest Rock 'n' Roll Band in the World."

Opening act was Stevie Wonder, until this point a prominent artist within black radio but now, with his newest inimitable single "Superstition" forthcoming along with what would be a string of fantastic albums, his crossover popularity to the rock audience world would be solidified.

It was decided to film the concerts over the course of four shows, two in Fort Worth and two in Houston, Texas around midway through the tour and that the edited version would be released theatrically as a new Rolling Stones concert film.

This film, released as Ladies And Gentlemen, The Rolling Stones in 1974, fell out of its theatrical runs as the years went by and then into the '90s, when the band themselves acquired the full rights to the film, it was mostly not seen anymore, other than in bootlegged versions. 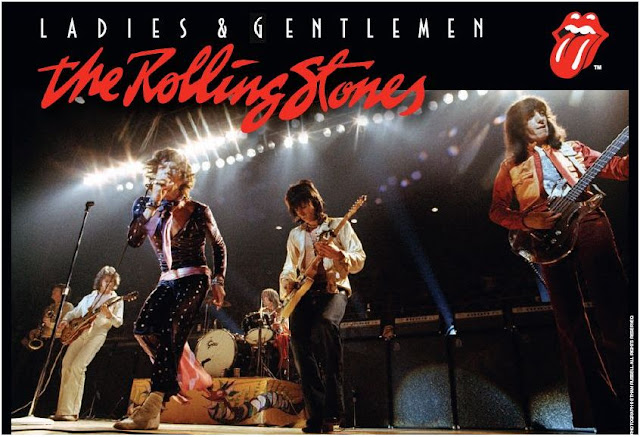 Finally making a DVD and Blu-Ray debut, Ladies And Gentlemen, The Rolling Stones gives anyone who is either a die-hard Rolling Stones fan, a casual fan that wonders just what makes the band so special in the first place, or even an indie film fan, a chance to catch the band not only at a zenith of touring behind a peak album, but a glimpse at a good old fashioned Seventies styled concert film, and all that entails. 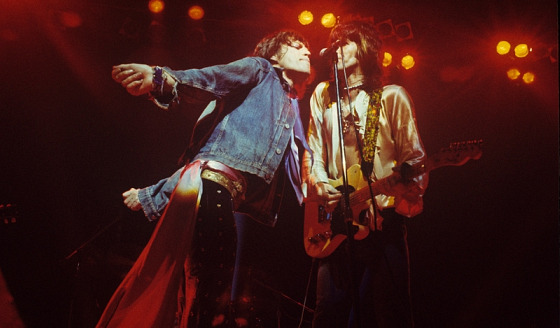 This is a truly pure filmed concert which was really all about the music first and foremost, and not about the extravagant prop filled stage shows and over-the-top bombast for which The Rolling Stones would, only a few years later, become the main culprits of cultivating. 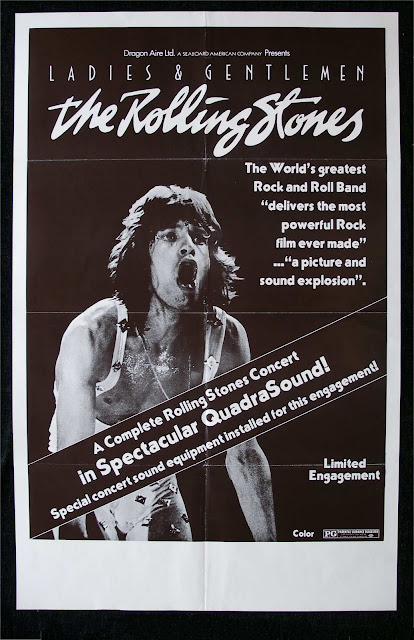 Shot in 16mm and later blown-up to 35mm using a "fluid process" from a visual point of view, this is not a film for the perfectionist. Not only will you not get the crystalline qualities that are commonplace now, but there are also technical mishaps within shots, a few blurs here, a misplaced pan there, and throughout the film, and this is 100 percent intentionally done so, is some of the darkest, strangest moody stage lighting you will probably ever encounter for a concert. There are times when the entire frame is pitch back save for a few bits of Jagger, there are times when you struggle to find band members. Far removed from the well lighted huge productions of a Stones show today.

Sound is great, as the shows were recorded and mixed with ideas of keeping up quality (and originally a "Quadrasound" process was used for initial theatrical screenings to really make viewers feel they were at one of the shows).

So how about the performances? 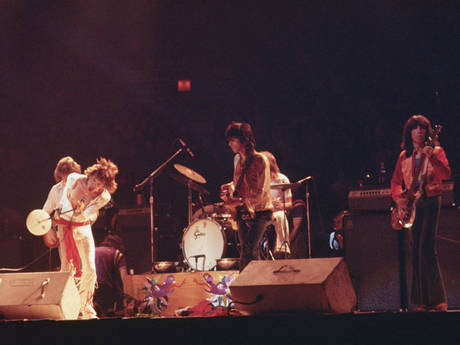 For a myriad of reasons, The Rolling Stones had, at the time, a justly earned reputation of being musical talents of the highest order mixed with being party boys of the highest order. Throw in some hard drugs that everyone is doing in the band or not, long touring schedules, fighting girlfriends, and whatever usually inhabits the world when you happen to be a Rolling Stone circa 1972 (they had been "Exiles" living in France, endured the death of a key member a few years before, and consistently found themselves involved in drug busts, law suits and it is rumored, an assassination contract put out on Mick Jagger by The Hell's Angels because of the events of Altamont) and sure, certain performances are going to not always be up to that of tight, well rehearsed nature.

One could say that at times The Rolling Stones could be a bit lackadaisical or sloppy on stage. 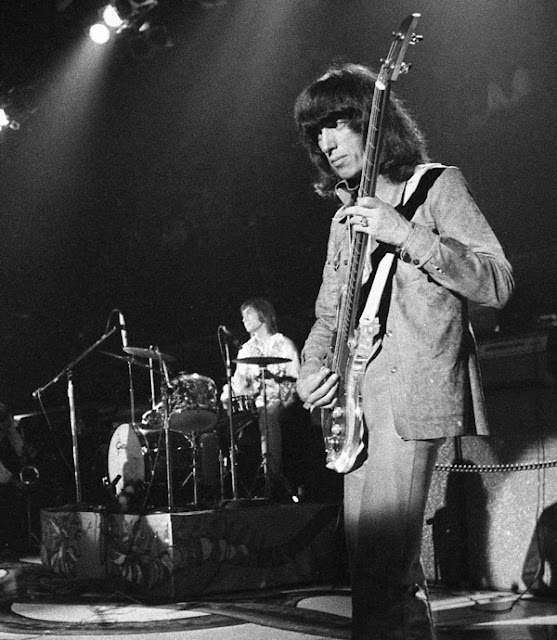 Thankfully, the performances and songs captured for this film show a band that is well-honed, sharp and really on top of form. 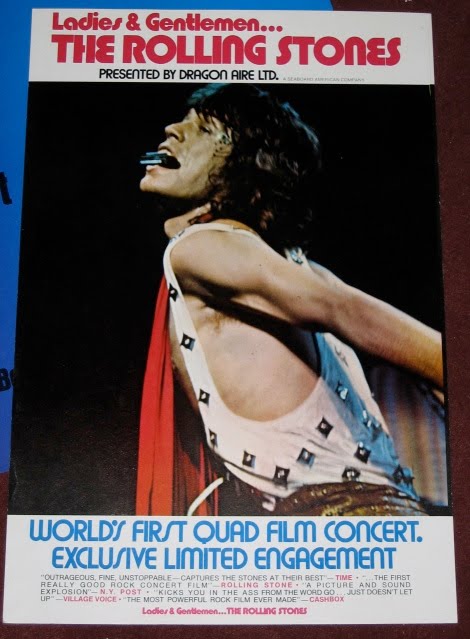 While Mick is undeniably the Mick that you would expect, always on and always the great frontman/vocalist, guitarist Keith Richards seems keenly focused, although to be honest, he never really has been the goofball fool that media stories and his interview antics would have you believe, Charlie Watts is pure cool and showcases why he is such a great drummer, whether it be rock and roll, the blues or jazz that he's playing, he is the consummate pro. 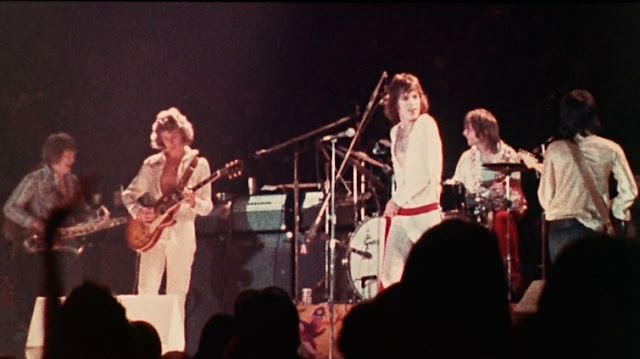 The real shining star of the bunch is probably guitarist Mick Taylor, who is stand out unreal whenever he takes a solo or a spotlight lick. As with the classic albums that he was a part of, often called The Stones' best, you really gain an appreciation for what he brought to the band's sound and here, his full exquisite musicianship is stunning. equally impressive is how he may be one of the mellowest musicians to ever grace The Stones' ranks. Perhaps he is even more laid back than the textbook example of laid back, bassist Bill Wyman.

Throw in a set list that is cherry picked from some of their greatest albums ever: Beggar's Banquet, Let It Bleed,Sticky Fingers, and of course Exile On Main Street and the low price of admission dvd cost, makes this one of the better Stones related concert films that can be officially obtained.

Bonus extras are really outstanding as well: Three songs from a small television studio set up, that has the group comfortably side by side playing in a rare small setting, an interview with Mick from 1972 that while not super illuminating, really plays up the boyish charisma that showed how easily Mick could capture any media, and a new 2010 interview that has a still charming and witty Mick illuminate the film's background and related historical details, such as why one of the songs from Exile..., "Rocks Off" which was played every night of the tour, was mysteriously left out of the film. 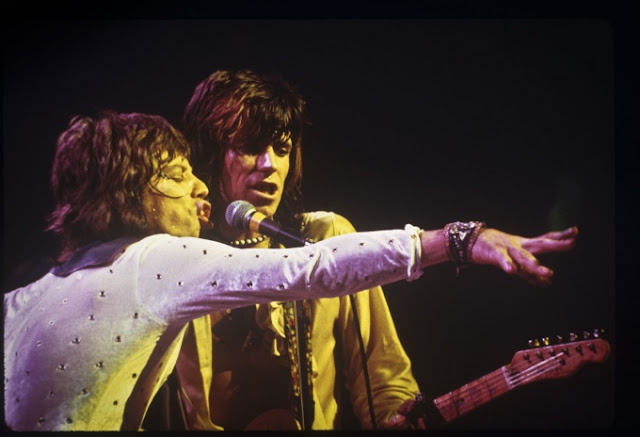 You can tell that The Rolling Stones went through quite of bit of expensive restoration and cleanup in making this film available officially to coincide with the big anniversary reissue of their masterpiece, Exile On Main Street.

Ladies and Gentlemen...serves both as a reminder of just how different a concert and concert film could be in 1972, and how, when they really wanted to pull out a magnificent performance, no band could touch The Rolling Stones.
At this point in time, there were no contenders to the title, "The Greatest Rock 'n' Roll Band in the World."