This, my last Mystery Box column for 2010, is also among my more difficult writing challenges yet.

How to encapsulate, within this forum, not only my sadness at the thought that on December 18, 2010, Don Van Vliet a.k.a. Captain Beefheart, has shuffled off this mortal coil, but attempt to also effectively communicate my love, admiration and really, a fanatical appreciation of this artist—an artist of truly awe inspiring, exceptionally innovative magnitude. 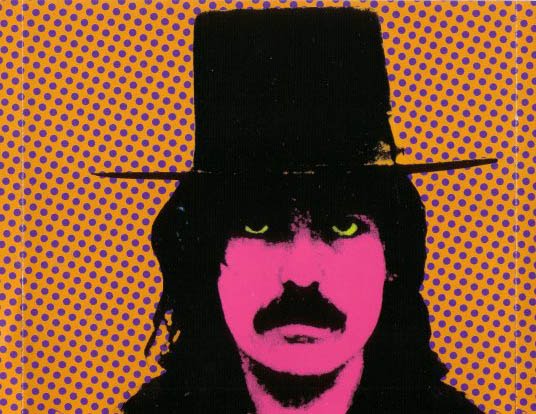 Already there have been better words written in one day, than I could possibly ever come up with in five years: incredible columns from around the world eulogizing The Captain, and some by those who not only performed with him, but were a part of his inner circle.


My first experience with hearing Captain Beefheart was through his association with Frank Zappa. On Zappa's 1st solo album, the incredible Hot Rats, Beefheart made a startling guest vocal appearance (the rest of the album is instrumental) on the long track "Willie the Pimp," while on the mostly live Zappa/Beefheart/Mothers album, 1975's Bongo Fury, Captain Beefheart, in what was his only tour with Zappa, performs vocals on several tracks, including spoken word as well as pitching in with sax and harmonica.

While I knew I was already late to the Beefheart game by 1975, I still needed to investigate this mysterious sandpaper voiced man that was a compadre to Zappa, a genius I was already very familiar with.


Reaching back to what I heard was an extremely "difficult" album, I purchased the double lp Trout Mask Replica(1969) Captain Beefheart and The Magic Band's 3rd album, produced by Frank Zappa for his own Straight Records.

There are few descriptive words that can describe first listening to TMR (or looking at the infamous cover art and way out band photos). Here were strange, surreal spoken word pieces wrapped around all manner of cacophonous instrumental passages, dadaist songs that seemed as if they were made by aliens who only saw pictures that their receptive minds could only see (because they were aliens) of music we humans called "The Blues," "Jazz" and whatever else was influenced by a primordial mud stew. Perhaps a band put together by D.C. Comics' Swamp Thing was the only way to explain this album?

Then, somehow, after a few spins of this sprawling giant, the damn thing began to make some sense.

Melodies emerged, instruments jived, lyrics became poems of the spheres made not by an untalented madman, or mentally ill untrained outsider artist, but meticulously put together like some all knowing puzzle sent forth from the ether to allow we mere mortals a chance to listen to what Americans could do with the original contributions Americans made to music: The Blues, Jazz, weathered Doo Wop, old R&B, Soul and anything else that somehow escaped the trap of the British Invasion, European Psychedelia, and Mod influences that really were just American music styles handed back to us in the first place by talented folks in dandy clothes. Funny how he always sold more albums and had a few hits in the U.K. by the way...

Legendary British B.B.C. disk jockey John Peel managed to elevate the album to a deserved pedestal saying, "If there has been anything in the history of popular music which could be described as a work of art in a way that people who are involved in other areas of art would understand, then Trout Mask Replica is probably that work."


After this I was hooked. Working backwards and forwards through the Captain Beefheart/Magic Band discography and history revealed more eye opening brilliance and an endless run of quality, innovation and pure bad-ass great musical moments.

The Magic Band lineups would change at times (for instance the 1st Beefheart album, 1967's wondrous Safe As Milk included Blues legend Taj Mahal and Ry Cooder of Buena Vista Social Club fame) but always there was something special, and different coming from "Beef."

After what was his 12th and final album, Ice Cream for Crow (1982) Captain Beefheart decided, after so many years of frustration with the commerce of making music and an unappreciative mainstream, to retire completely from music and devote his now reclusive life in the Mohave desert and later Trinidad, California where he stuck strictly to painting as Don Van Vliet, living with his wife Jan and refusing any request to make another album or more music other than a some spoken word poetry pieces and a couple of spoken vocal spots on two former Magic Band member's albums. He passed away in as reclusive a manner as his life had been, according to his art dealer's press release, at aged 69 losing a long-term battle with MS. Oddly, he spent more years as a painter than as a musical force making records, but his visual work is no less original, enchanting or deeply engaging.

It is often said in so many stories and interviews with and about Captain Beefheart that he never had a hit record or made too much money off of music. Doubtlessly this fact really hurt and frustrated him and his musicians, from paying the band members decent wages, to trying to cover the costs of recording studios in the days when home recording was not as much of an option for musicians weaned on analog studios and pre-internet promotional junkets.

Yet, even in this sad period of mourning the man, the riches that may have eluded Don Van Vliet's musical career, which did come to him a bit more from his artwork, has come even more so in a vast amount of riches through those who he has influenced with his albums.


Not unlike The Ramones, who never had a true hit record or made that much money on selling albums, but are now ever-present at baseballs games, in films and on commercials (somebody is making ALOT of money off their music now), time will inevitably reward Captain Beefheart, past any human death, his legend will grow and grow more. New generations of kids will discover his albums and his music, and the Captain Beefheart legacy will become so much greater than any fly by night current top 10 act, who might be riding high at the moment and selling mega platinum now, but in time, will fade in the same way that say, Pat Boone's multi-million selling career has faded (sorry Pat!).

Will folks be listening to Lady Gaga in a fifty years time? 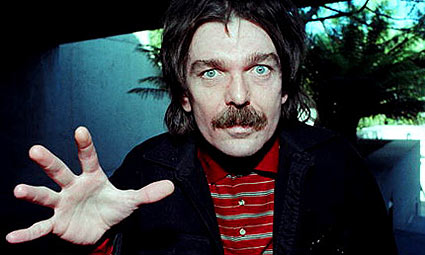 I am positive that they will be listening to Captain Beefheart—for he will live forever...

One of the nicer tributes to Don Van Vliet/Captain Beefheart comes by way of Magic Band guitarist, Beefheart friend, one time Beefheart manger (and fantastic musician himself), Gary Lucas, who did a touching piece for The Wall Street Journal here.

Lastly, one of my favorite Captain Beefheart songs, the first track of TMR: