Drew Friedman's TOO SOON?: 15 Years of Even More Genius

15 Years of Even More Genius

One day, the gods of all ART great and marvelous, finally will decide to roll out their lengthy gilded achievement banner listing cartoonists, illustrators and caricaturists. This banner will have been imprinted (in a Ben-Day dots process) with all the names of those who have been creatively talented beyond the skills of mere mortal men and women.

Without a doubt, near the top of this list of illustrious souls, residing among the gloriously renown names of Jack Kirby, Harvey Kurtzman, Basil Wolverton, Jim Sterenko, Wally Wood, Steve Ditko, Charles Addams, Edward Gorey and Robert Crumb among others, will be the name...

For, as R. Crumb so eloquently has written, "I wish I had this guy's talent."

I have been a huge fan of Drew Friedman's work for some 30 years now. Ever since I first laughed in astonishment at the panels that he and his equally talented brother, writer/musician Josh Alan Friedman (subject of a future Mystery Box column) came up with for inclusion in the seminal RAW Graphix Magazine, beginning with issue #1 in 1980.

For myself and the rest of the comics world, RAW was a mind blowingly fresh approach to the comics, graphics and traditional storytelling medium. Moving way beyond what had been sired by the original '60s counterculture artists, yet still connected to those visionary rebels, RAW surfed in alongside all the great Post Punk/New Wave/Experimental bands of the mid to late '70s and early '80s and, caught up in this zeitgeist, spoke to me in a similar way that was comparable to hearing The Ramones' or The Residents' music for the first time.

The first eight issues of RAW were published by Françoise Mouly and co-edited by Mouly and Art Spiegelman (of MAUS fame) and were an attempt to push the boundaries of the comic book and cartoon genre closer to a a fine arts appreciation.

Not only did they accomplish this, RAW introduced the world to a stable of magnificent, maverick artists brought together under one underground graphix roof. So many of these artists, Gary Panter, The Friedmans, Mark Newgarden, Kim Deitch, Ben Katchor, Chris Ware, Kaz, Sue Coe and Mark Beyer, have since gone on to successful careers and worldwide recognition.


The early works of The Friedman Brothers were often filled with imagined "B" and more often than not "Z" list celebrity scenarios that for myself were hilariously dark and shady, often grim, and aligned with the seedier underbelly of Tinseltown, akin to a ride through Kenneth Anger's Hollywood Babylon book, with a big dose of MAD Magazine thrown in, also one of my childhood obsessions, and I guessed, also that of The Friedmans.

Where the Friedmans were different however is that they were among the earliest I can recall to have introduced and included so many off-kilter character actors, average schmucks, and low life types that were lovingly created and observed in an equal mix of both an appreciative joyful love and head shaking "What the heck is wrong with these people?" kind of disbelief.

That much of the work was fictional could-have-beens, or based on semi-truthful scandalous stories, added to the garish fascination and amusement. With such a cast of characters, the Friedman's made an unstoppable comedic drive down the road of genius. Tor Johnson, Rondo Hatton, Shemp Howard, William Frawley, Joe Franklin, all may have been familiar names before, but truly entered the lexicon of pop culture greats and even sometimes attained mainstream appeal after appearing in one of the Friedman's strips.

To this day, hardly a month goes by that myself or my girlfriend hasn't quoted The Saga Of Frank Sinatra Jr.with "He sure ain't his old man." when we see a not quite as talented celebrity offspring attempting a grand showbiz career like their famous parent easily had.

The incredible artwork, by Drew, was astonishingly rendered in an insanely detailed black and white pointillist, stipple style that cannot be fully captured with words (more on this later). 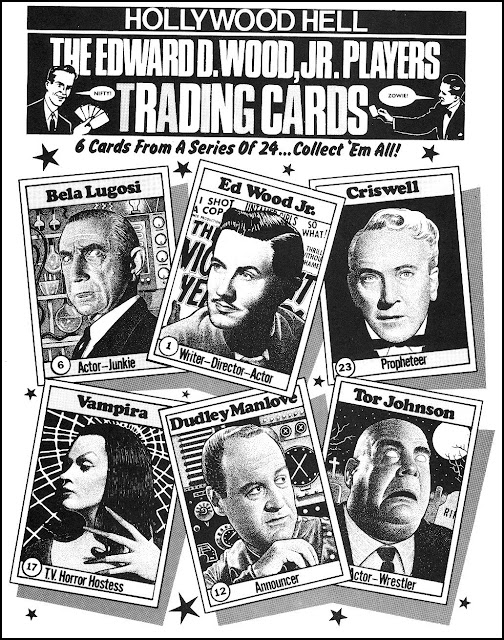 It can be difficult to track down all of Friedman's work from these days which also include Drew's collection ofThe Ed Wood Jr. Players 36 Trading Cards set, but thankfully there are two anthologies that capture this period of Drew's work, Any Similarity to Persons Living or Dead Is Purely Coincidental (1986 with a 25th anniversary edition coming in 2011) and Warts and All (1997).

Both are, without question, two books to track down.

Fast forward into the '90s and Drew Friedman's work as a cartoonist, caricaturist and illustrator had grown to the point where he was now doing work for Spy Magazine, covers and feature illustrations for The New Yorker, The Boston Globe, Rolling Stones, Time, Fortune, Newsweek, Entertainment Weekly, Field and Stream, prominent left wing as well as right wing political mags (subjects always unbiasedly rendered in pure Friedman hilarity regardless of political leanings) and the top prize of illustrating the two enormous best sellers, Private Parts and Miss America by "The King Of All Media," Howard Stern.

Thankfully, now one of the greatest American publishers of comics related works, Fantagraphics Books, has published a new Drew Friedman anthology that brings us up to date and for the first time focuses on his portraiture, entitled, TOO SOON?: Famous/Infamous Faces 1995 - 2010. 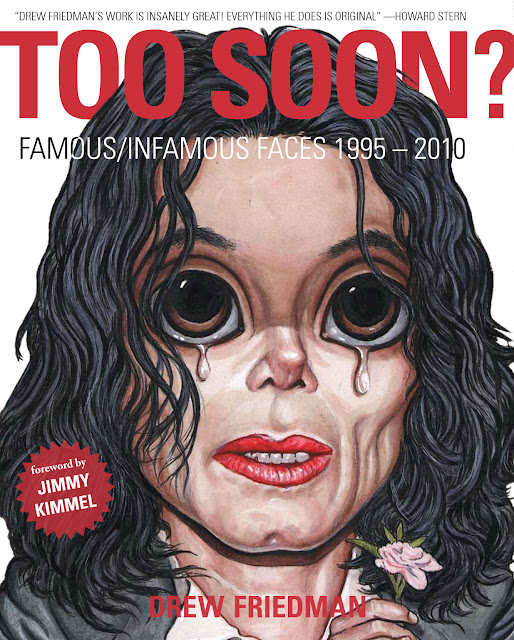 As a fan, this book was a godsend for me, since I wasn't a regular reader of many of the magazines that Drew did pieces for during these years, although you would have to live in a deserted shed not to have seen many of the illustrations in your daily travels, so imbued in the mainstream are many of them. Now one can happily round up a nice batch of Drew's last 15 years of brilliance in this extensive collection.

The title for the book can be traced to an appearance by comic Gilbert Gottfried according to Drew "...Gilbert was the first comic to put "TOO SOON?" on the map, a day after 9/11, telling a joke about his plane flying into the Empire State Building, an audience member yelled "TOO SOON!"

Since then, it's of course become a catchphrase for feigning surprise over making an inappropriate comment right after a tragedy or death. I believe I'm the first to use it as a book title. I think someone has a CD coming out with the title as well. Great minds..."

Divided into two sections: political personalities and celebrities, Friedman's portraits within TOO SOON?, as always, remarkably manage to convey a telepathic-like glimpse into his subject's charismatic nuances, affectations, foibles, ticks, and for better or worse their ultimate humanity which brings us both closer to the subjects as public spectacle, as well as keeping us at a humorously safe distance.

The word funny, doesn't even begin to describe the contents of this book.

From the insightful and anecdotal wit of the book's foreword by Jimmy Kimmel, through Drew Friedman's deeply interesting introduction revealing his intriguing childhood, career trajectories, influences, methods, his important partnership with his wife Kathy and subsequent transition from his black and white stippling insanity to his current brush with colors style, and onto the running commentary regarding each image, the text wonderfully guides the reader over a chock-full 200 illustrations.

With TOO SOON? Drew Friedman has not only once again solidifies his stature as one the of the planet's funniest, most observant and skilled artists, I can add the often used, but in this case it's actually true, label of that of a living legend.

Howard Stern, perhaps Friedman's number one fan, recently said something to the effect of, if an Andy Warhol painting could be worth millions, than a Drew Friedman should be worth 350 billion dollars. Perhaps overstated just a bit, but I can see Stern's point, Drew Friedman is really that much of a giant and Too Soon? is his current meisterwerk.

Buy this book as a gift for yourself, your friends, loved ones, siblings, children, parents and grandparents.

They all will thank you.