ECHO AND THE BUNNYMEN: An Intimate Evening At Great Scott

ECHO AND THE BUNNYMEN:

An Intimate Evening At Great Scott

Things couldn't have been more perfectly designed...seeing one of the legendary (and a favorite) post punk bands performing in Allston, MA at a tiny venue called Great Scott. Echo And The Bunnymen, in an extremely rare, intimate one-off return to playing a small room, not unlike their earliest days of performing in the clubs of Liverpool.

Little did I know that a freakish snow storm and terrifying driving experience would almost derail this grand opportunity.

Then again, it was also the perfect backdrop for seeing a band who has weathered the highs and lows of musical superstardom and continued to pilot their musical voyage through the "Seven Seas." 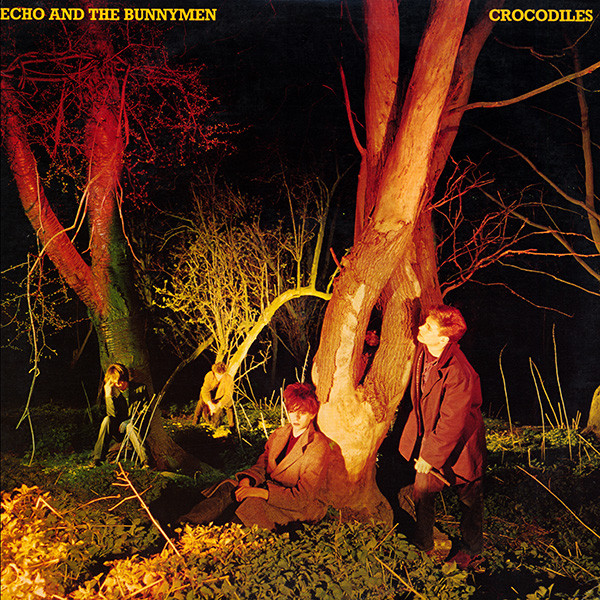 From the beginning, Echo And The Bunnymen have always stood apart from their peers. Forming in the late '70s out of that era's post punk rush of creativity meets adrenalin meets psychedelic substances, they have always sparkled of great things and grandeur. They easily traversed (never mimicked) the pre-gothic poetic somnambulance and musical romanticism of their greatest influences—equal parts Jim Morrison and The Doors, Scott Walker, The Velvet Underground, Bertolt Brecht, Revolver era Beatles, and Arthur Lee's Love. 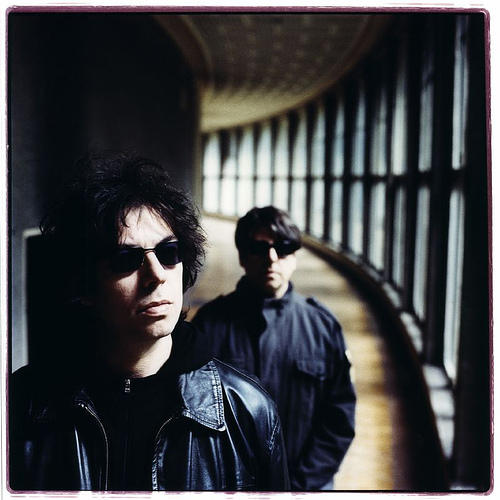 Now, thirty-one years on from their fantastic debut, Crocodiles, the band has been whittled down to only two of the original four founding members who wrote and recorded five stellar albums between 1980 and 1987. Each of those albums a complete and singular jewel. Singer Ian McCulloch and guitarist Will Sargeant continue without their two counterparts, now adding newer, but no less wonderful musicians to their recording and touring lineup. Drummer Pete de Freitas was killed in a motorcycle accident in 1989, bassist Les Pattinson quit in 1999 to take care of his mother, and in an eerily strange side note, longstanding keyboardist and "fifth" Bunnyman, Jake Brockman was also killed in a motorcycle accident in September of 2009. 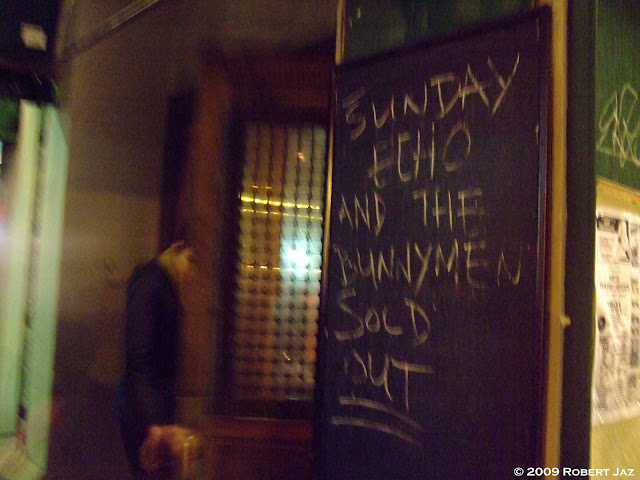 With a roughly 250 person capacity, the tickets for the Great Scott concert sold out quickly (although I suspect they oversold by another 120 or more as well). The show was part of the Fenway Recordings Sessions. The Fenway Recording record label has had some illustrious artists take part in their sessions in the past and has always done a huge amount for the Jimmy Fund Charity, so I am sure that this was one of the reasons that they managed to secure Echo And The Bunnymen at all.

My girlfriend and I headed up to the concert from our HQ in Providence, RI, giving ourselves a reasonable drive time and happily secure that our car was now fit for getting us to a show that we'd looked forward to for months. The day before we had spent the entire Saturday having our brakes fixed after they had become a grinding maelstrom of worry and scare. We had neglected to look further into the front passenger tire that had mysteriously gone flat the day before, thinking that by not hearing any air escaping after refilling it, and not noticing any spikes or razors sticking out of it, the tire was fine for the road trip.

As we headed up Rt 95 North, the weather turned to sleet followed by messy, poor visibility snow. Around twenty miles up the car started to rumble and shake. Thinking it was only the grooved construction site road that we were passing over, I continued. Finally, after control of the car became nearly impossible I pulled over into the breakdown lane. We found out that there was almost nothing left of the suspect tire and in fact, I had been driving on the rim only. A scary revelation to say the least. We were now stuck and things were not looking too good for making the concert. My girlfriend called AAA and somehow managed to get them to go for both a membership renewal and the desperately needed service call. Finally the tow truck arrived and the cheerful driver fitted the diminutive doughnut spare onto the wheel, assuring us that the rim could be saved and that we should be able to drive home on the spare without any problems as long as we took it slow.

Drive home?? Well, that may have been the safer thing to do, but we already had tickets, and a great determination, so needless to say, at forty five miles an hour, we finally made it to Great Scott with plenty of time to...spare.

We arrived while the set opening DJ was still spinning an array of vibrant music such as Gang Of Four, made all the more thrilling by the anticipation of the arrival of the Bunnymen who were walked through the crowd and onto the smallish stage. McCulloch is rock star tall and still an intimidating presence in dark sunglasses and long winter coat. 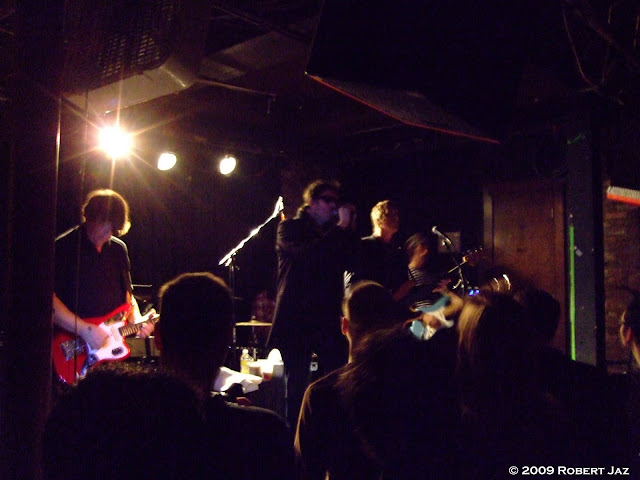 The band opened with for me, a complete surprise, "Going Up" the first song from their debut album. The set list followed with songs from each of the first five albums as well as a few from the newest and more recent albums. I was surprised at how many were songs I was hoping they would play. The sound was superbly crisp, with McCulloch's voice and Sargeant's guitar parts standing out as dazzling reminders of just how wonderous this band could be in bringing their luminous sound into a live setting. Often called "one of the greatest songs ever" (well, at least by McCulloch) "The Killing Moon" from Ocean Rain still manages to send shivers up the spine. 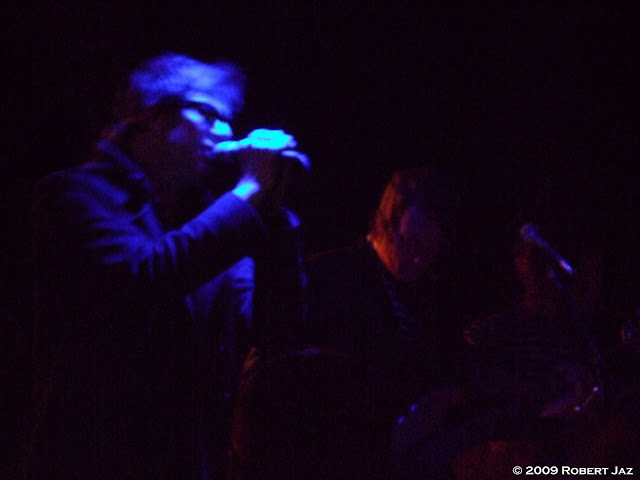 While some fans were a bit disappointed at the lack of stage patter, for myself I was not there to receive a big hug and any Liberace chit chat warmth. The music was embracing and enough, and with a set that ran for over an hour, sufficient to make this a truly special evening. If thought of for what this was, a special intimate live recording session, say in the spirit of the great BBC Radio's John Peel Sessions, then to have them play fifteen songs was charitable.

They did not play an audience favorite, Crocodile's garage rock classic "Do It Clean" but knowing that the band will be returning next month to a much larger venue, The House Of Blues, I have a feeling that a few presents were left behind only to be unwrapped at that show.

Was this worth riding through "Stormy Weather" on a doughnut?

The set list for the show (followed by the album on which the song originally appears): 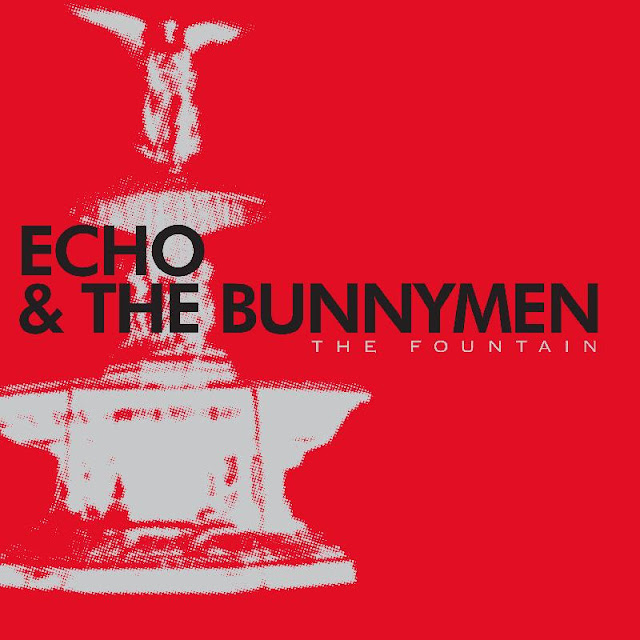 Echo And The Bunnymen's newest album, The Fountain, was released earlier this month and the band will be performing November 23rd, 2009 at The House Of Blues in Boston. Their official site is http://www.bunnymen.com.
on October 07, 2013