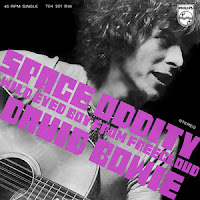 1969 was a banner year for momentous historical and cultural events.

This was the year of Woodstock's "...3 Days of Peace & Music" festival, and its parallel universe / evil Captain Kirk, the Rolling Stones' Altamont festival.

The Manson Family cult went on their murderous rampage in L.A., Nixon was elected President and the Vietnam War continued amidst increasing domestic demonstrations and opposition to the war which escalated following the historically horrific My Lai Massacre by American troops.

The Beatles gave their last ever live performance on a rooftop,  and Led Zeppelin's first album was released.

Yet, in this tumultuous year, which many saw as the end of the optimism that grew from the counter-cultural youth movement of the past decade, no greater single event optimistically captured television viewers the world over than one in particular.

No other trip was quite as spectacular or fantastic as the wonder, imagination and positive vibe of where the future of civilization could be headed, then the July 11th United States' NASA Apollo 11 lunar landing in the Sea of Tranquility (or Mare Tranquillitatis if you prefer the beautifully named Latin version). 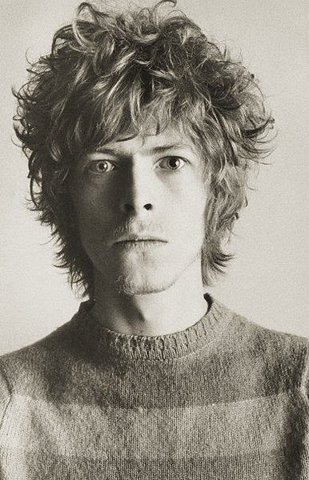 1969 was also a perfectly timed year for David Bowie, a twenty two year old English singer and identity struggling composer, who had previously not found the success he desired with a batch of earlier singles or a self titled album. 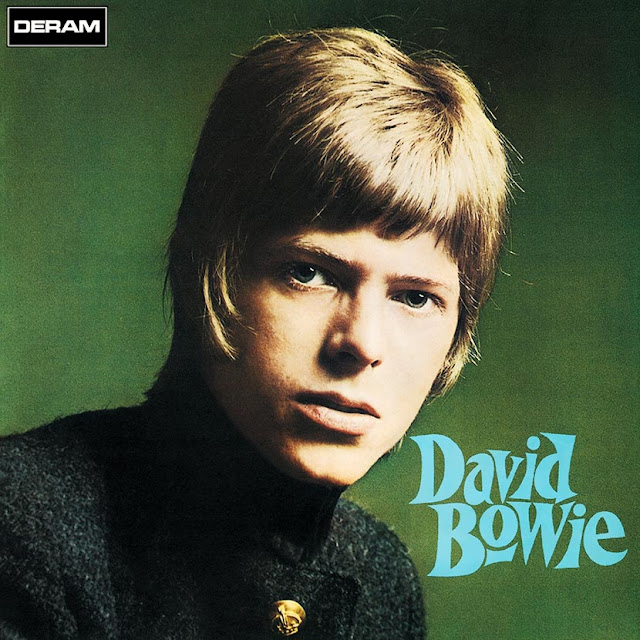 Perhaps his songs and album had been too British, too theatrical or even just a bit too mod, mime, music hall, novelty or otherwise Anthony Newlyesque for a wider psychedelicized audience that was busy grooving on Canned Heat? Sure he had many great influences and the talent was there, but his music was just not connecting with many listeners. 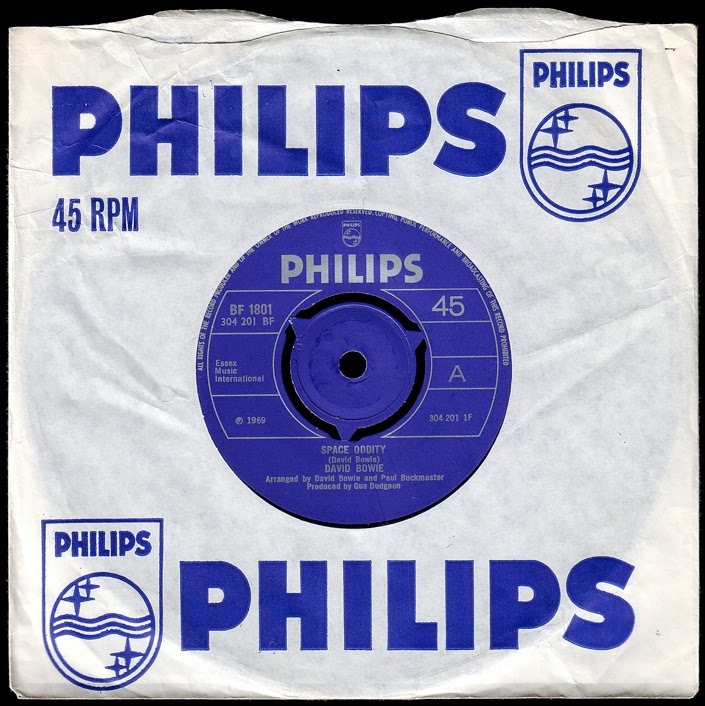 Bowie decided it was now perfect timing to coincide the release of a brand new single with this great American moon landing. This single, "Space Oddity", would not only reach the U.K. top 5 in the Autumn of 1969 it would go on to become one of his great worldwide signature songs. 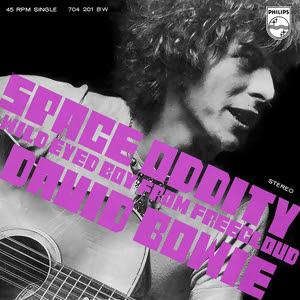 "Space Oddity" was composed the previous year and recorded initially as a demo, then a different sounding single and promo film. It was reworked for the '69 released version that most have become familiar with. Largely inspired after seeing Stanley Kubrick's 2001: A Space Odyssey, a film whose expansive space vistas and solitary surreal quality had impacted many young film goers that year, who took head expanding chemicals for viewing this trippy film. 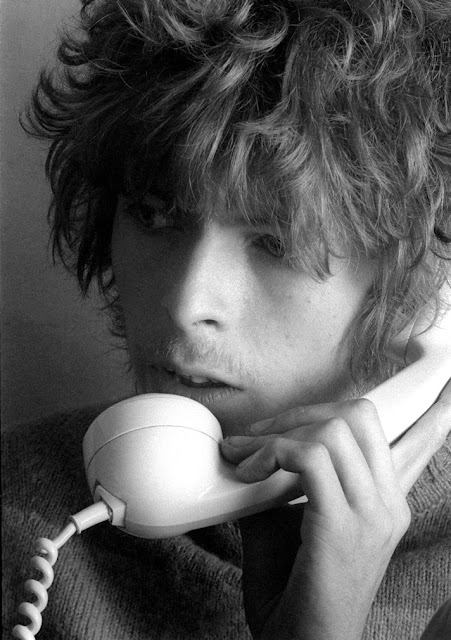 The story ambiguously follows that of an astronaut, Major Tom, who leaves a horrid Earth to venture aboard his spaceship into the stars. Helplessly lost and floating after losing contact with "Ground Control," his last words are "Tell my wife I love her very so." Ironically, the BBC used the song for its Apollo 11 television coverage—I guess there wasn't anyone in programming at the British Broadcasting Company who actually listened to the lyrics. 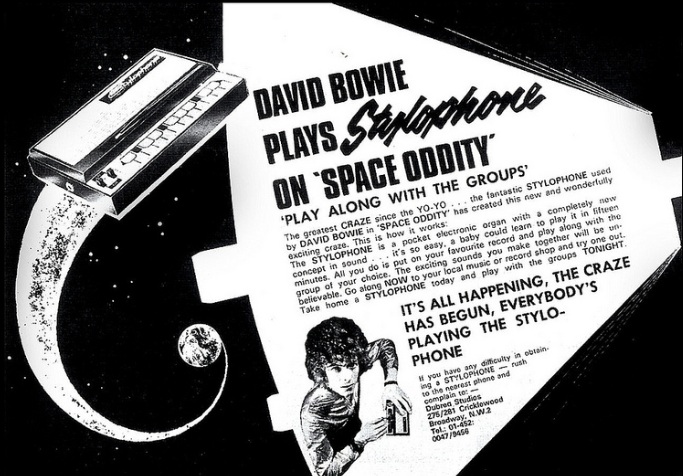 Musically sparse, primarily acoustic sounding and yet majestically symphonic at the same time, "Space Oddity" has a creepy, although sadly forlorn quality that is enhanced by Bowie's performance on the Stylophone, a miniature, stylus played pocket synthesizer.

The B side for the "Space Oddity" single that rockets Bowie to stardom is "Wild Eyed Boy From Freecloud." 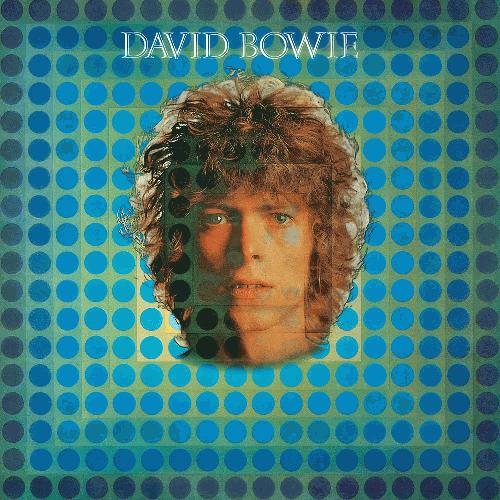 An accompanying self titled album was released in November. This album, which leads off with "Space Oddity" has continued to be both a fascinating and superb collection of Bowie songs for his fanatical listeners (I count myself as one of them) and derided as a hodgepodge of grasping for styles and dated weak compositions. While I would not put it up against his absolute best, I would surely rate it far much higher than the album's many detractors would. 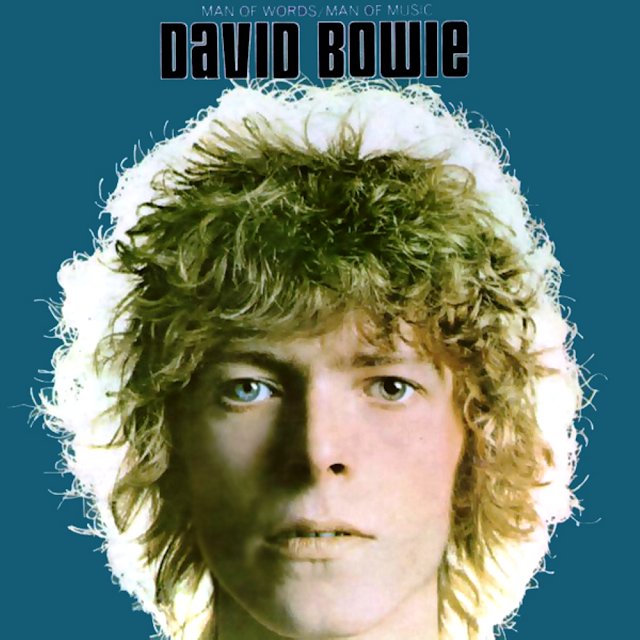 For myself, the different styles play as an often great set of juxtaposed delights in the Bowie songbook. Elements and themes that would later appear on all of the classic Bowie albums are certainly part of the initial appeal, yet I feel the tracks hold their own and make this a completely beautiful and whole album. I have often thought of this as a fine greeting the dawn/Sunday morning listening album—good for groggy hangovers and sleepy awakenings.

Even if Bowie had not released his later classics, I believe I would still return to this album with a reverent fondness. Tracks such as the magnificent gauziness that is "Memory Of A Free Festival" (also included as several bonus tracks such as the 2 part single that featured the first appearance of Bowie's legendary Spider guitarist Mick Ronson), the futurist whorl of "Cygnet Committee," the lilting loveliness of "An Occasional Dream" and "Letter To Hermione" and the spectacular rock on! of "Unwashed and Somewhat Slightly Dazed" all make the album a wonderful jewel and not one to pan, as many a lazy and regurgitated review enjoys doing. The album was released simply as David Bowie on Philips Records in the U.K. with an op-art graphic surrounding a portrait of a shaggy haired Bowie. It was retitled and released as Man of Words/Man of Music on Mercury Records for the U.S. market in fear it otherwise could be confused with Bowie's eponymous 1967 1st album on Deram records. In 1972, after Bowie's The Rise and Fall of Ziggy Stardust and the Spiders From Mars became a hit and all things in the pop world became glitter Ziggy, the album was renamed Space Oddity and released with a current Bowie as Ziggy cover picture. 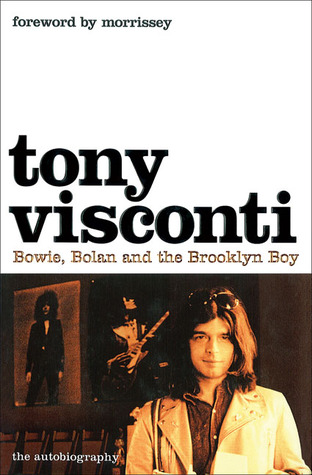 This album also became the first to introduce Tony Visconti as a producer for Bowie. Visconti would go on to work with Bowie on his greatest albums and songs. Again, ironically, what might be considered a seriously flawed what in the hell was I thinking then moment, Visconti disliked the "Space Oddity" song so much that he preferred to let another producer take over the production duties for that sole track while he would produce the rest of the album. The honors for "Space Oddity" went to Gus Dudgeon, who had previously worked on The Zombies' "She's Not There" and albums by The Bonzo Dog Band. He would later soar to even higher heights of success by producing the biggest albums for Elton John.

David Bowie has just been reissued in a deluxe 40th Anniversary, two disc edition by Virgin Records. The set has been remastered and restored, presenting it as first appeared in England. An accompanying booklet meticulously details the album's creation and history along with great unreleased photos of Bowie, his musicians and the picture sleeves of the various vinyl single releases off the album. The first disc is the album proper and the second disc contains a wealth of rarities, some newly unreleased even for a Bowie collector like myself, and some from past reissues now finally brought together for a wonderfully complete picture of a long overlooked, but thoroughly worthwhile album. An album that is essential for any David Bowie fan, or a great one finally try on for anyone unfamiliar and previously put off by reading negative (the bastards!) criticisms.
on October 07, 2013