AC/DC: My Favorite Musical acts I will See Again and Again. Part 3.

AC/DC: My Favorite Musical acts I will See Again and Again. Part 3.

A few weeks ago I attended a concert by the Australian band AC/DC at Gillette Stadium, a.k.a. home to the NFL's New England Patriots.

These days, Gillette is located within the confines of a sparkling wonder that is Patriot Place: A mega city of commerce hosting the Patriot's Hall of Fame, restaurants and macho retail. Really, it is a man-mall of sorts, built out of the barren disrepair and lonely dust that was once the rickety wooden seat loserville known as the old Foxboro Stadium.


Appropriate venue for a band of yobs turned colossal giants that are the boys in AC/DC.

AC/DC has a great early song called "It's a Long Way to the Top If You Want to Rock and Roll."

They reached that pinnacle back in 1980 with their 'Back In Black' album. A stunning comeback for the band after their original vocalist Bon Scott, a key factor in the group's initial success, was found dead in his automobile, a victim of alcohol induced choking. With replacement vocalist Brian Johnson, the band not only resurrected their rock, they created a masterful legendary album, which still remains one of the better selling of all time.

For the last 29 years, AC/DC have pretty much sat at that top of the music world as the greatest rock band on the planet Earth.

Their sound is unmistakable within a few notes, a chord or a snap of the snare drum. They managed to finally step over the previously greatest Rolling Stones (when original RS bassist Bill Wyman quit in 1992 he said The Stones became creatively stagnant by the late '80s. I agree with Bill on this) and even lording over the mighty U2 by having a gazillion more in record sales, tour receipts and an everyman approach to their instantly recognizable sound. A sound that crosses economic status and language barriers with ease. Let us not forget AC/DC's music appearing endlessly on film, tv and video game soundtracks. Iconic as thunder, they are profound as rainfall. 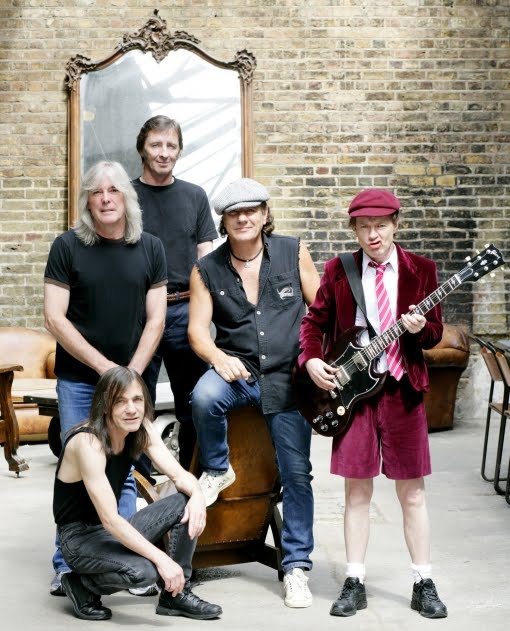 Yes, at the moment they are truly the greatest rock band in the world.

The show at Gillette was the first night of the 2nd leg of touring for their wildly successful Black Ice album which was released in 2008. Black Ice hit number one around the world and sold massive numbers in its first week of release. Not many bands can take their small pub early rock band sound and have it translate to such a vast venue as a stadium, but AC/DC makes it work. The band's schtick and their audiences enjoyment really benefit from the huge budget. Spending money to put on a show means screens for showing hilarious animation, a gargantuan inflatable woman riding atop a huge smoking runaway train that sits onstage and an astronomically large catwalk with a platform tower for Angus to run up and down through the audience and then elevate upwards so everyone can hear him "play a guitar just like a ringin' a bell" (yeah, that's a Chuck Berry line as a tribute to Angus' doing the duckwalk while playing—Berry's signature move). 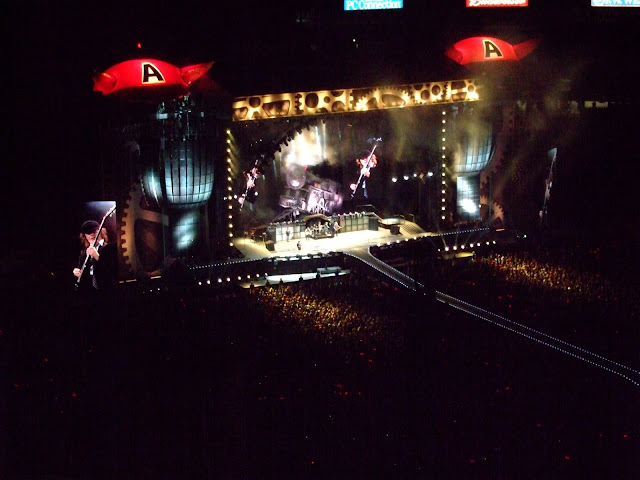 From the moment I sighted the stage at Gillette, which sported giant, red devil horned, letter "A" baseball caps on each side, I knew I was in for some goofy fun. By the time of the very last encore, when cannons come out, exploding endlessly amidst blasting smoke though fireworks during "For Those About to Rock, We Salute You," I was positive about this goofy fun.

How can something so successful and selling in such incredible numbers also be so good? I find it difficult to wrap my head around this conundrum, and instead I just roll with the enjoyment. There is no other act that so joyfully captures the feeling of a live action comic book—a glorious comic book that simultaneously captures both a naughty junior high, schoolboy fantasy mentality, while also masterfully creating something so simplistic it is timelessly complex.

In other words, "Let There Be Rock."

The early days of AC/DC were of a much smaller, though no less compelling variety. Formed by Scottish born, Australian transplants Malcolm and Angus Young in 1973 Sydney, they took the name for their band from a metal plate attached to a sewing machine which belonged to their sister. AC/DC is an abbreviation for "alternating current/direct current" but to the boys, connoting power, electricity and above all Rock and Roll, the name was as simple and to the point as their musical legacy has become.

Guitarist Angus Young's standard stagewear was not always the iconic, knickered Australian schoolboy. He originally tried other costumes such as Superman (a version he called Super-Ang!), Spiderman, a gorilla and Zorro. Angus' original schoolboy uniform was purported to be that of his secondary school, Ashfield Boys High School in Sydney and once again their sister factors into the picture as it was she who suggested Angus use it.

Even though he is currently aged 61, and has been with them since the classic Back In Black album (29 years ago!) I still think of vocalist Brian Johnson as the new kid in the band. You see, I was lucky enough to see AC/DC for FREE with Bon Scott, the original legendary singer, on their Powerage tour at the Rocky Point Amusement Park in Warwick, RI. They played in the middle of the park on the midway and at one point, the ever shirtless Bon Scott, complete with a solo playing Angus riding on his shoulders, ran past me and through the crowd. Bon Scott, you always will be the toughest act to follow... 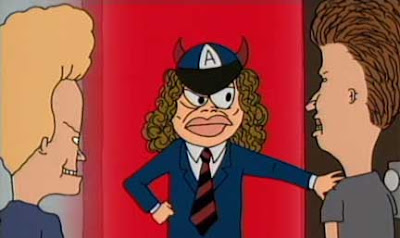 British newspaper The Guardian ran a story that stated AC/DC albums have coincided with every major album recession since the 1970s.

Part of the appeal of AC/DC lies in the predictability of an unchanging sound and image. Malcom Young's answer as to why AC/DC have always sounded pretty much the same: "Most people, when they progress, they progress right up their asses."

Bon Scott was rejected from the Australian army as they reasoned him, "socially maladjusted."

Mutt Lange, producer of Back In Black, was married to Shania Twain. They separated in 2008.

Malcolm and Angus' older brother is George Young, who was successful in the early '60s band, The Easybeats who had the hit single "Friday On My Mind." george produced early AC/DC albums and then later returned for their 200 release, Stiff Upper Lip. George also teamed up with fellow Easybeats/producer Harry Vanda for the recording act, Flash and the Pan.

During their song, "The Jack" (Australian slang term for venereal disease) the band always loves to scan their audience for any lovely ladies that they then project on the large screens At the Gillette Stadium show, they also projected comedian/actor David Spade, who was in attendance at the concert. 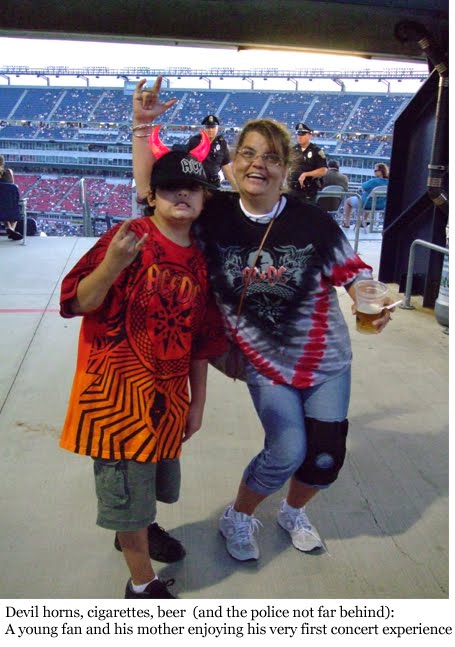 Judging by the vast number of families in attendance, it is startling how much going to see AC/DC has become an all ages and safe family affair.

Malcolm Young was originally in a band called Velvet Underground in 1971. This was an Australian band and not the infamous Lou Reed N.Y.C. band. However, AC/DC's first tour of Australia was in support of Lou Reed.

The biggest selling item at AC/DC concerts is probably the light-up devil horns. It is a remarkable sight to see tens of thousands of these glowing throughout the stadium. "Highway To Hell" indeed. Cost=$15. Eternal damnation...I mean happiness=priceless.

Angus Young has more energy than is humanly possible. Whether it was when he was 20 or now that he is in his fifties. He is a superhero of immeasurable force, plain and simple.