TREK WEEK: 13 Things I Obsessed About On Star Trek, The Original Series a.k.a. Just Where Are the Bathrooms On the Starship Enterprise?

TREK WEEK: 13 Things I Obsessed About On Star Trek,

The Original Series a.k.a.

Just Where Are the Bathrooms On the Starship Enterprise?

This piece was originally published May 4th, 2009 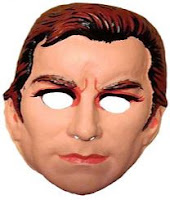 Ah, classic 1966 Star Trek. We know it all too well: William Shatner's inimitable Captain James T. Kirk; Leonard Nimoy's half Vulcan, half human Mr. Spock; and Sulu. Not to mention, an immeasurable amount of fodder for discussion, trivia, merchandising and collectibles.

1966 Star Trek, in its endless cycle of syndicated reruns during my teenage years, was my very first foray into any type of a full blown obsessive, deep fan-trance, geeked out, collector type mentality.


Call it the beginning of my lovable/sick desire to collect memorabilia, toys, books and to actually go beyond that of merely absorbing something as just entertainment.

Sure, I had other loves before and spent any money I had on courting them as well. There was James Bond and all things spy; monster movies; music; models; MAD magazine and comic books (I was a proud member of Marvel's FOOM); Saturday morning animation, and other groovy syndicated tv shows like Batman (Adam West), The Green Hornet, The Munsters and The Addams Family. Yet, Star Trek is where my young brain skipped a therapy session and decided to dive into things. I needed the toys, the books and devoted my pondering thoughts to all things Star Trek in a way that I not yet experienced.

Where no "I" had ever gone before.

Now, a small sampling of these as I list 13 things about Star Trek: The Original Series that I heavily obsessed about. In no particular order of importance, as they were all important... 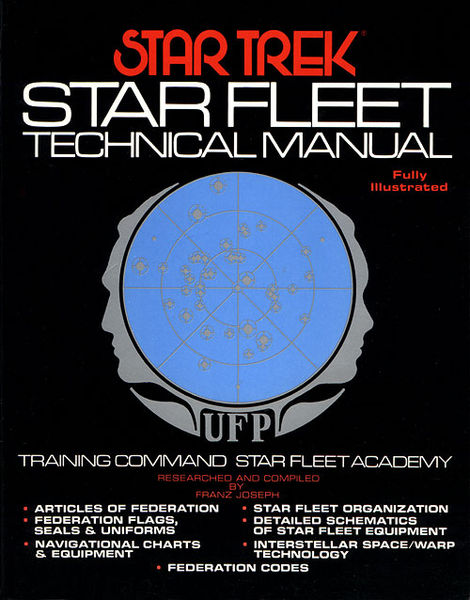 This 1975 first printing was my bible, my education and my ultimate entry into everything I could use in my future efforts at becoming a proud member of Star Fleet Command. As I knew that one day the events on Star Trek would most likely happen for real, having this as a reference guide to study in detail, was my ticket to the Academy. I studied the various uniform codes, flags, diplomatic insignias...you want design aesthetics, here you go. The first three Trek films heavily referenced this manual and used some of its designs even though the author came up with some things on his own outside of Roddenberry's official production coding. Created by master Star Trek geek Franz Joseph Schnaubelt and his daughter who also founded STAR, the San Diego Trek appreciation society... though I knew not at the time, these were my mentors. Fandom which in turn heavily influenced the actual art, now not as rare an idea. I still own this gem. 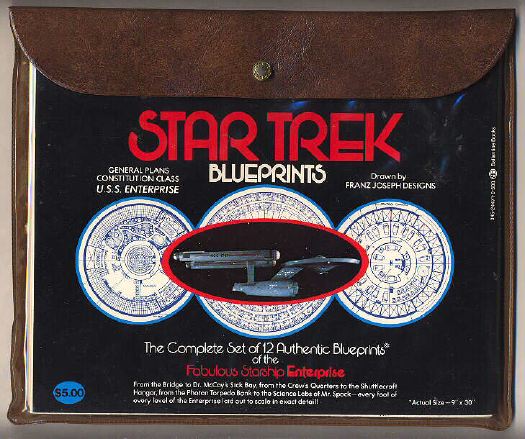 Yet another diamond I still have from good old Franz Joseph, published around the same time period as his manual. The best $5 ever spent. Twelve, count 'em! twelve glorious blueprints of Her Majesty, NCC-1701: The USS Enterprise. Here I could finally scrutinize, visualize and follow just where in relation to The Bridge did Kirk retire to his quarters with or without a...hmm guest? Where could I find the galley, sickbay, and for the longest time, one of the most curious ponderings ever for me, the exact locations of the Enterprise's water closets...no, I never used that term...the bathrooms? 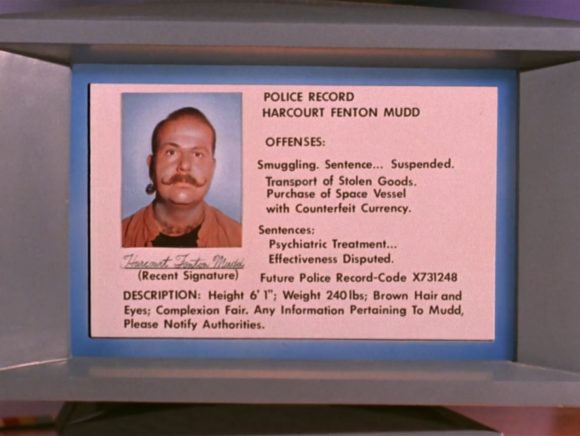 I couldn't get enough of Harry Mudd's get rich quick schemes and devious, though light-hearted, ways. He had access to the babes. Though only available for 2 great episodes, due to actor Roger C. Carmel's unpredicted death, these were comical gems. The first episode, "Mudd's Women" involved a mail order bride scheme, and the second episode, "I, Mudd" followed Harry's logical path towards creating android beauties (of course). This cat was something else to aspire to indeed. 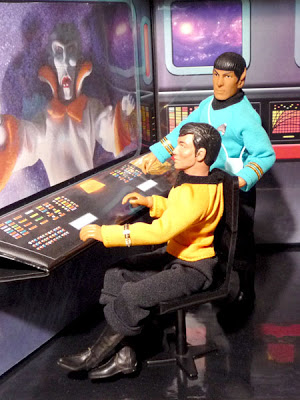 It pretty much goes without saying how much I loved these. I had the DC and Marvel Mego figures, but the Trek figures really gave me chills. Somehow mine have been lost to the winds of time, but thankfully now reproduced should I need to revisit having the Klingon make out with Uhura again. 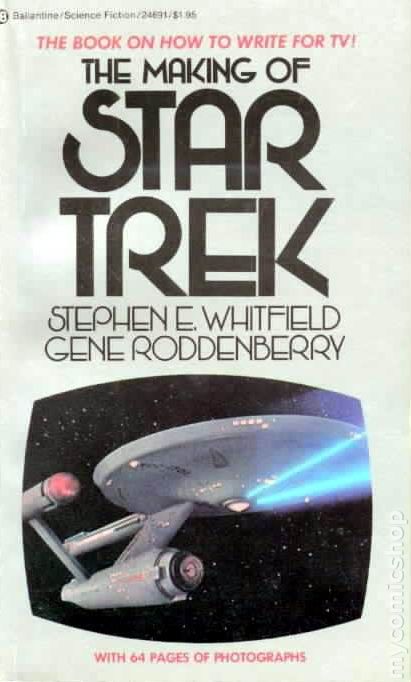 Books about tv shows of movies did not get any better or deeper than this. Whitfield had the secrets of the Trek universe handed to him by Gene Roddenberry himself. While the first cover blurb stated "The book on how to write for TV" I was more concerned with the second blurb "The only book of its kind! The complete history of a top TV series -- how a television show is conceived, written, sold and produced". This was for me God's honest truth. How ideas came about, budgets were utilized and more importantly, leading to my next obsession... 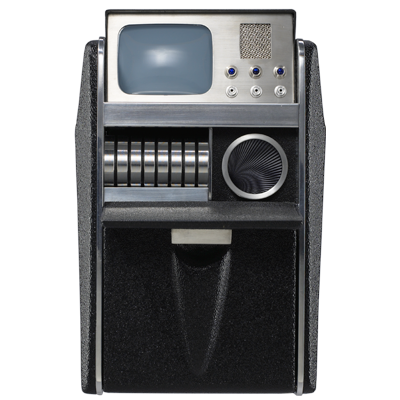 I painfully needed to know about the many gadgets, and other handheld items of fun. Tricorders, Hand Phasers, Pistol Phasers and Photon grenade Launchers all were swimming around in my head. With the above book I learned how an array of "exotic salt shakers" ended up as medical instruments to be used by Bones. Such accidental ingenuity has stayed with me in my own creative life to this day. 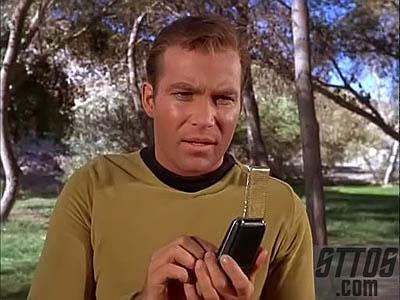 Once again a prop to end all props. Imagine a small, handheld, flip open wireless device that enables you to speak with someone over vast distances. It will never happen. Dick Tracy had his wristwatch style, which was pretty freakin' cool too. 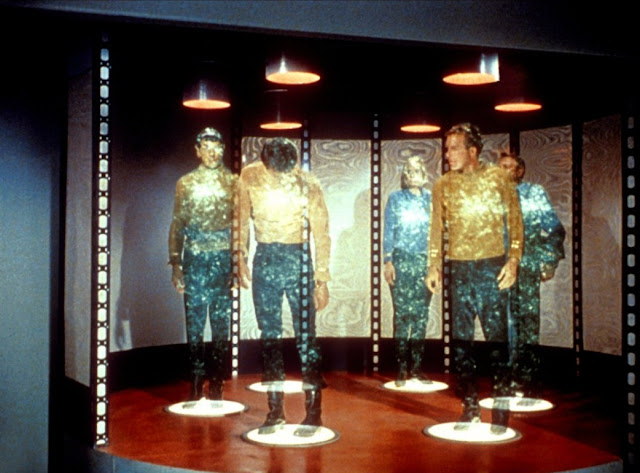 Ok, maybe we have cel phones now, but when do we get transporters?? 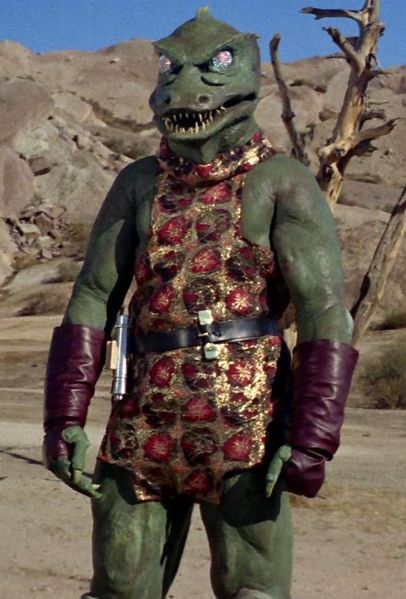 I know I wasn't the only one that wondered who, why and from where came this strange reptilian captain who made his first appearance on the original series episode The Arena. Perhaps for me he was some sort of weird hybrid of Sleestack and my beloved Godzilla. The Gorn was appealing as the mysterious strong, silent type who chuckled a bit at his devious work. So popular was Los Gorn that Gorns made many appearances in the Star Trek universe, from The Animated Series through Next Generation, Enterprise, toys (Like a Mego figure. Not bad for a one episode appearance at the time, huh.) and games. 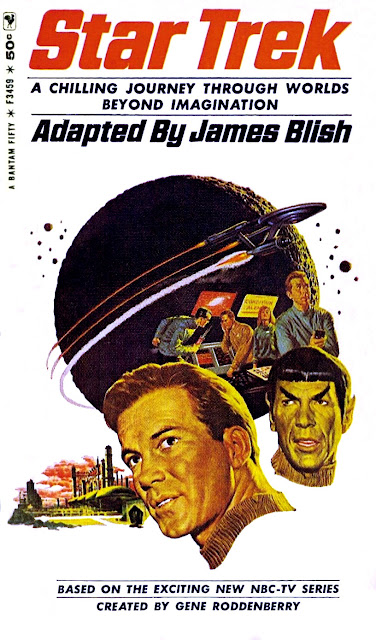 I collected them all so I could reread and analyse and imagine and nag with all of my fellow crew members again and again. "Oh Sulu, can you please tell the Captain that I will be right back for duty after a quick visit to the water closet? Thanks pal!" 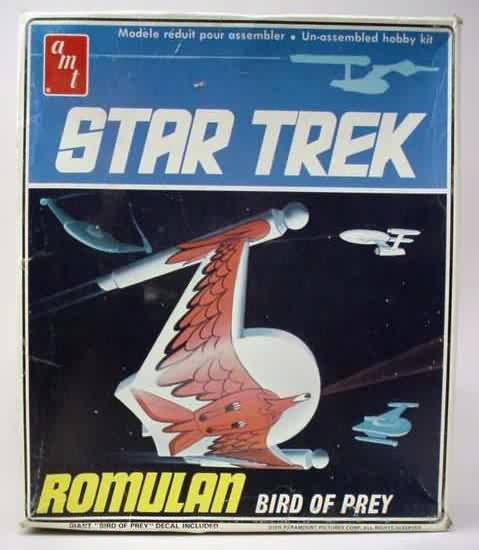 At the time, there was no way I could own an expensive reproduction or even imagine an actual prop. Model building kits satisfied this sadness, by allowing me to make my own Pistol Phaser and Communicator. Not too mention a great Romulan Bird of Prey and a stunningly cool Klingon D-7 class battlecruiser. 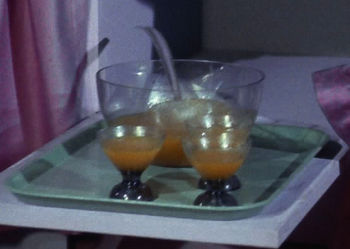 Just what was this beverage that was offered to Kirk by a grinning and goofy Balok in the episode entitled The Corbomite Maneuver? As if ultimate B movie oddity Clint Howard wasn't enough to keep your head spinning for days knowing he was Lil' Opie Taylor's brother in real life, then just exactly what this enticingly interesting cocktail was and did, would. For the record, it was grapefruit juice.

turned crew members into "no faces." 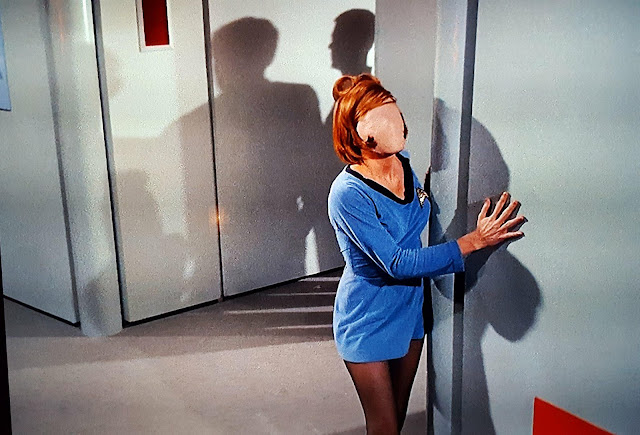 Ok, this one is a biggie. Not only did I seriously want that 3D chess set that Kirk whips Spock's logical ass on in this episode, but more importantly, I simply could never get my head around one of my favorite impenetrable scenes of all time.

When Charlie Evans goes on his brat rampage around the ship, turns a young woman into an old woman, and upon hearing a few crew members laughing, shouts "No laughing!" at what the viewer sees as only shadows of the crew members, who are obviously just having their own good time unaware of Charlie. As he stalks off, you see a female crew member from the group slowly grip her way from around the corner shockingly showing no facial features at all.

What now seems so funny and might I even say commonplace, at the time really hit me over the head with a barrage of questions, nightmares and inexplicable what abouts. In the span of however time it took for Kirk to make Charlie turn her (and we assume the other no faces, but hey doesn't that shadow still have a nose???) back to normal, mere seconds become unlivable. How could she breathe? See? Eat? Scream?

Never got over that one and never will... 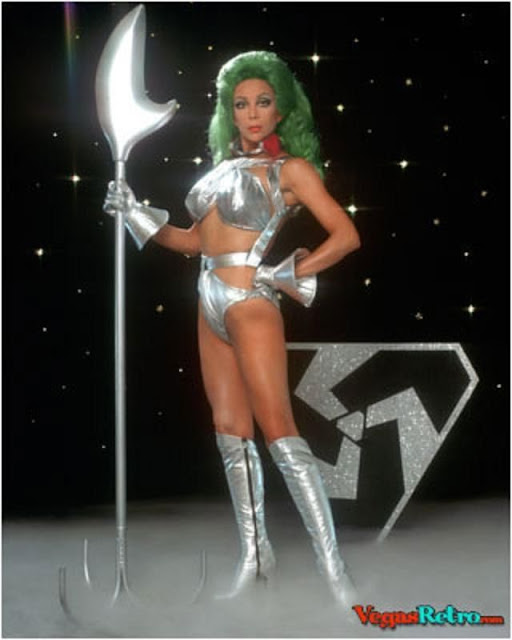 Played by the late Angelique Pettyjohn. Star Trek always was and always will be loaded with attractive women, both alien and otherwise, but Shanah still holds a special place in the canon of Star Trek beauties for many a Trek fan. Silver makes for a cool outfit. Long may she wander the stars...

I could easily come up with so many more examples but that would push me over a few more columns. When do I get to see some of the happening restaurants on Earth? Do I really want to be an officer or is security just as cool? What about the goatee'd Spock of Mirror, Mirror? the evil/good Kirks of The Enemy Within? Frank Gorshin's Bele of "Let That Be Your Last Battlefield?" or how as kids we really loved to goof on our friend Herbert just like the hippies of "The Way to Eden" did.

So while the Star Trek world continues to expand, progress and we celebrate a new film, I think again fondly of the original series. How, no matter what has come after, be it Next Generation, the films or Deep Space Nine, no matter how much more advanced the props and scripts, slicker the effects and gargantuan the budgets, try as I may, the original series still fills me with glee and happy thoughts of cheap sets, rubber suits, exotic salt shakers, strange dialogue and how best to survive a Charlie X "no face" transformation.