Not Your Everyday Monk Rockers 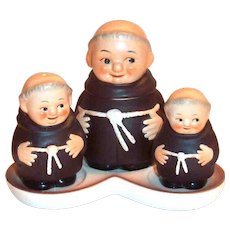 How could 5 American GI's, stationed on a military base in the middle of 1961's Cold War immersed Germany, in a few years become one of the most out there, avant garde, experimental garage rock and roll art bands to ever come along in pop music's history?

Well, it doesn't hurt if you have an electric banjo, are called MONKS and dress like...Monks.

For over ten years, directors Dietmar Post and Lucia Palacios have been working to bring the little known tale of one of the wildest, most strikingly different bands of the sixties to the screen. This unlikely story is a superbly engaging film called Monks: The Transatlantic Feedback.

For those uninitiated to the Monks' story, music or visual image, this film tells a thoroughly head scratching tale: they were a group of GI's who originally set out to primarily have some fun and meet some girls through making beat music and covering Chuck Berry tunes under the name The Torquays in 1964 while performing for their fellow servicemen also stationed in Germany. They soon hooked up with "a pair of loopy existentialist visionaries," namely two German art student/producers who helped use their own experimental ideas about art, noise, society, politics and generally how to create an in your face image—best seen to be believed—to shape the band into an altogether different kind of pop act. 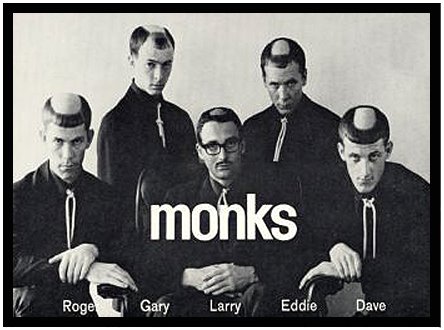 Renamed Monks, they shaved their heads into the (uh...classic?) monks' tonsures, garbed themselves in all black with "noose" styled ties, adopted a tighter staccato rhythmic structure for their music—helped by pounding drums with less cymbals, bashing rhythm on an electric banjo and their guitarist's early use of feedback, wah and a fledgling fuzzbox (supposedly influencing Jimi Hendrix along the way)—created a uniquely sarcastic tinged vocal style and lyrically charged their songs with black humored thoughts on the war in Vietnam and other sensitive subjects. They came up with a set of rules on how to be a MONK which basically was their own list on how to be aloof and act like cool rock stars. 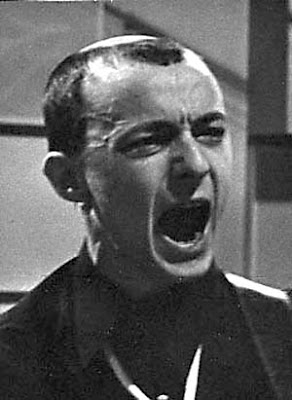 They managed to both alienate and fascinate crowds with their proto everything sound and somehow even parlayed it into a major label recording contract which yielded the classic album Black Monk Time.
With songs such as "Monk Time," "Shut Up," and "I Hate You" they could be defined in terms that would later be used to describe more contemporary bands such as punk, techno, primitive, heavy metal, alternative, underground, Krautrock, experimental, noise rock, and repetitive post punk.

So far ahead and yet, of their time, when creativity and shock could be a daily fresh occurrence. In their view, they were the anti-Beatles, seeing the fab four as just a little too safe and predictable. Audiences of the day either loved and embraced them or shook their heads with confusion.

They really only gained an appreciation 30 years later when England's Mark E. Smith and his band The Fall loosely covered a few MONKS songs on their Extricate album in 1990, thereby creating a snowball of interest and enthusiasm about this long forgotten band.

Coinciding with very few other like-minded music makers so that perhaps only a handful of equally imaginative and avant rock bands come to mind as operating so independently on their own sound elsewhere at the time: Andy Warhol's sponsored Velvet Underground; satirical protest poets The Fugs; early dissonant practitioners The Godz and Mayo Thompson's Red Krayola.

The film uses a generous number of images from the band's archives, the European Cold War backdrop, and Germany's happening art and music scene, so that you quickly become visually immersed in the story. I would imagine, even if one's musical tastes perhaps hold little interest in the band, viewing the film as a historical and sociological story alone would still be an interesting treat. 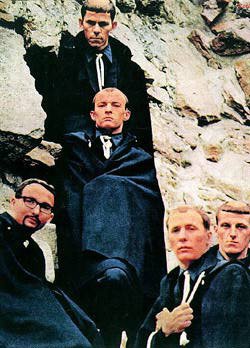 Interviews with the members of the Monks bring a touching and insightful glimpse into the psyche of these men who had differing opinions on their time spent serving in the U.S. Armed Forces, their influence on other notable musicians and how each related to a post Monks obscurity. The film is capped by a much heralded late '90s reunion show where the band finally received its recognition and the music, beloved in all its reissue glory. 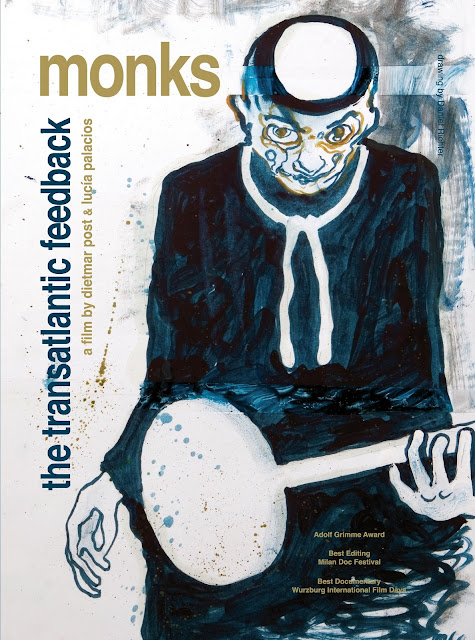 The dvd also features a booklet and over 70 minutes of special features such as band bios, original uncut German TV performances and reunion concert footage. My expectations were high for this release, and happily have been exceeded by the movie and supplemental material. This is a highly recommended film about a highly unusual group in an important time of rock and roll music's formative period.

MONKS:THE TRANSATLANTIC FEEDBACK will be released on dvd in the USA on May, 5th 2009 by Play Loud! The official movie site is at: http://www.playloud.org/themonks.html
on November 08, 2012