Menko is two things: first, a card game that has been played by kids in Japan since Japan's Edo period (1603 to 1868 a.k.a. the pre modern isolationist Shogunate era of Japan, usually the period where most bad ass Samurai films take place) and is surprisingly still around today, and second, the name for the actual cards themselves.

Menko as a game is similar to marbles and with much respect to this actual game, which is ingrained in a multitude of Japanese childhood memories to this day, you probably won't be playing Menko anytime soon, nor will I, but oh boy, a piece of cardboard with a colorful printed image on one side has rarely been as visually appealing and fun as the glorious Menko.

The Menko card reflects Japan's cultural history, pop history and team sports history. Being a close relative to the trading card, or even a Pokemon card, kids have collected them, traded them and probably sneaked a few into their pockets at the corner store...uhh, forgetting to pay at the register. 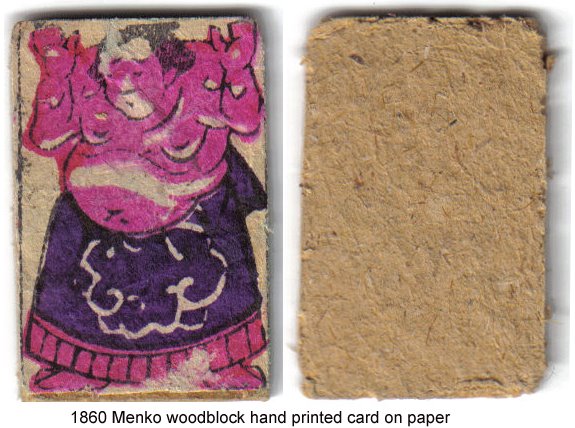 The Menko game involves slamming your cards down, so a card is usually made from a thick piece of paper or more commonly, cardboard. Prior to the 1930's use of mass produced printing processes such as offset, Menkos might had been made using clay, woodblock and other hand printing on paper methods. 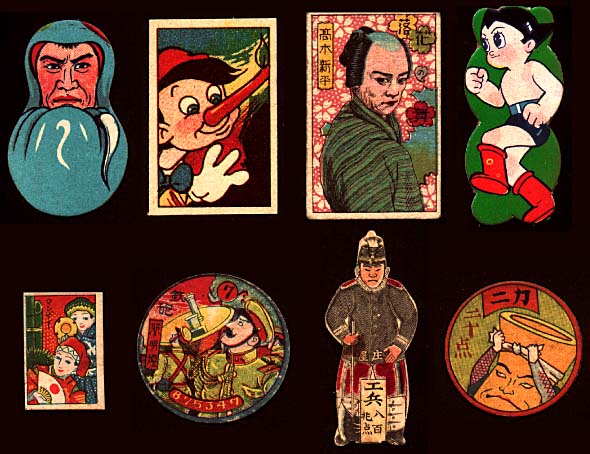 While the usual shape of a Menko card is a vertical rectangle, all sorts of die cut shapes have been used to great effect. The images themselves were either in the Menko hand drawn style, similar to a Golden or Silver Age comic book illustration, or a photographic image known as a Bromide. Of course, Bromides were a great way to depict popular singers, actors, Sumo wrestlers and baseball players, but the hand drawn Menkos are really something to behold. 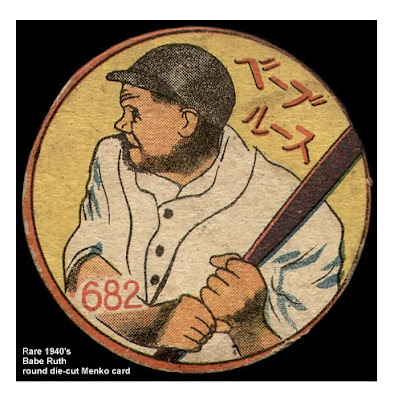 Please allow me this quick detour as it does come back to Menko cards.

With Springtime here, my obsession with baseball comes roaring back in full force, as well as my fondness for Japanese baseball and its related merchandise, trading cards and Menko cards. Menko cards and Japan's baseball history are very closely entwined. Baseball was originally brought to Japan in 1872 by an English Professor, Horace Wilson, who was teaching in Tokyo and introduced the game to his students as a way of providing them with more physical activity. The first organized baseball team in Japan was in 1878, and baseball's popularity grew as America's legendary players such as Babe Ruth visited the country on All Star exhibition tours. For a while the game was curtailed due to Japan's nationalistic banning of anything non-Japanese during WWII, but the post war years brought it back bigger than ever as American GI's stationed in Japan played, followed and encouraged the game. These days, baseball is Japan's biggest sport and has actually come back around to the U.S. as homegrown talent here wanes and great players from Japan and other Asian nations continue to be on the rise. 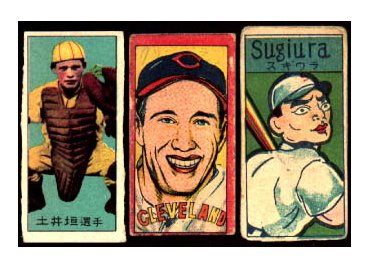 A few years ago I kept wondering why my fave team, the Boston Red Sox, did not have any superstar Japanese players, knowing that if they did they could easily increase and their status among Japanese fans both here and in Japan which translates to revenue through merchandise, ticket sales and media coverage rights. The Seattle Mariners baseball team has Ichiro Suzuki, who is truly a can do it all living legend, action figure of a player. The New York Yankees have had the star hitter Hideki Matsui, better know to his fans as "Godzilla" (much to my dismay, as I love the Kaiju monster Godzilla, and really hate the Yankees.) My thoughts came true as they signed one of Japan's most famous pitchers, Daisuke Matsuzaka (who just recently won Japan a title in the World Baseball Classic and was also named MVP of the series) to a large contract. As of now the Red Sox have three terrific Japanese pitchers on their team. 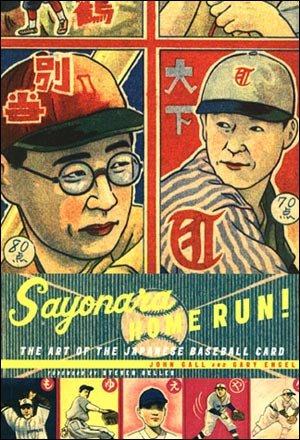 So since baseball is a much a part of Japanese culture as Godzilla, Ultraman and Sumo wrestling is, appreciating Menko cards through the history of Japanese baseball is just as essential as loving those other Japanese pop culture icons that have all been captured on menko cards. Luckily for English speakers, an outstanding book called Sayonara Home Run! The Art of the Japanese Baseball Card by John Gall and Gary Engel is available. This book features images of many Menko cards and equally fun regular style baseball trading cards. To my surprise however, it also includes a well written history of baseball in Japan using the cards as an illustrative guide, so that even if you are a person with little interest in sports, coming at this book from in interest in pop culture will be a thoroughly enjoyable experience as well. There is a preview available here. Who wouldn't love to know about the various Japanese team names like The Nippon Ham Fighters? 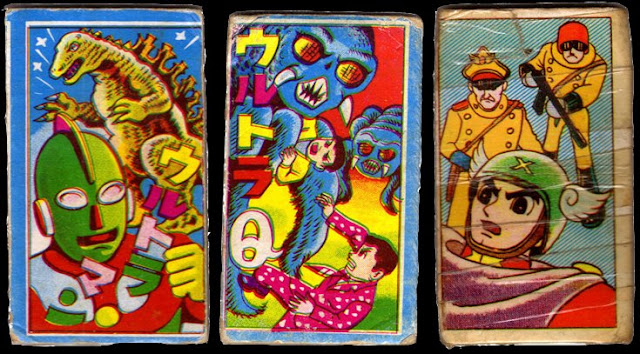 The world of Menko cards is a historically long and thematically extensive one filled with all the icons of Japan. Yet one more box of visual riches to be explored. I wonder how many Japanese mothers over the years threw away boxes of these splendid cards thinking their kids had accumulated enough junk?