Celebrating 7 Years (So Far, and So Far Out) of Garage Rock Radio Greatness

The Little Steven's Underground Garage syndicated weekly radio show began 7 years ago and is currently celebrating a seven year anniversary of playing selections from the ever growing umbrella of Garage Rock's creatively wild, brilliantly defiant and just plain freakin' good music from the '50s to NOW. The current program is listed at show #366 and there is definitely no sign of slowing down.

One would be hard-pressed to find a better music radio host at the moment (ok Bob Dylan might be an equal, but he's the subject of a future column) than the gravely voiced, street smart Dead End Kid who is Little Steven...

Steven Van Zandt a.k.a. Little Steven, was born at the beginning of the rock and roll decade, in 1950, to an Italian American family in Winthrop, Massachusetts. Moving to New Jersey when he was 7, his life as a musician will forever be one for modern music's history books. Even an incomplete list of accomplishments is staggering: founding member of Southside Johnny and the Asbury Jukes, several early pre fame Bruce Springsteen bands, twice (and currently) a key figure in the legendary Springsteen E Street Band, activist and leader of the '80s all star "Artists United Against Apartheid" Sun City benefit ensemble, and infamy as an actor in The Sopranos as the memorable Silvio. Hell, most folks would probably lounge on an island doing nothing else between recording albums and nightly four hour plus shows of touring with The E Street Band alone. 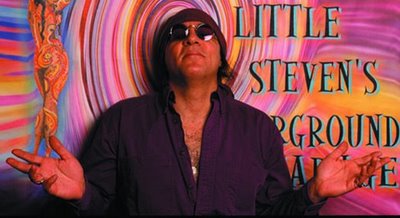 Thankfully, for those of us who live, love and breathe cool music, Mr. Van Zandt seems to be a workaholic, and number one fan of all that he programs on his radio show.
Originally starting in 2002 with a show platform entitled "And Then There Was Garage" that recognizes Garage Rock as having its foundation in fifties Rockabilly, the song "Louie Louie" and the multitude of sixties bands that sprung up throughout local music scenes everywhere, later to be immortalized by the "Godfather of Garage" future Patti Smith guitarist Lenny Kaye. By compiling some of his favorite of these bands into the double album Nuggets, released on the major label Electra Records, Lenny Kaye helped music fans to take these bands seriously and helped birth an overall genre name or three to this music which could now be called garage rock, punk rock, trash rock, psychedelic garage etc. Nuggets would be endlessly replicated to this day by such similarly named compilations such as Pebbles, and Rubbles and pretty much any comp or band that connects with these earlier bands and flies under the flag of garage and its various sub genres.

As radio entertainment, the Underground Garage is such a stimulating and continuously fresh listen, you'll easily become addicted. Peppered with wiseguy or cult tv and movie sound clips throughout, from each show starting with a Three Stooges' Moe proclaiming "Quiet numbskulls! I'm broadcasting!" to the show's closing that always leaves me a bit blue knowing its finale has come with this ring of truth, Homer Simpson sadly murmuring "Back to stupid reality." On many, many a late Sunday night long drive home from out of state, the show has provided me with both a very needed fun keep-awake, and an educational listen for discovering newer bands that have since become some strong favorites. I first heard The Raveonettes, King Khan and The Shrines, The Shazam, and The Woggles, thanks to The Underground Garage.

Each show has a theme that ties in the selections along with Little Steven's always informative and insightful commentary, be it a celebration of a great musician, band or record producer, "Ramones Forever and Ever!" "Ringo!" a particular historical event in music, "London/1964," "Pirate Radio Sails again," a tv show or film director's birthday "Marty Scorsese, " or a holiday, "Christmas A Go Go." There are interviews a plenty with the giants of music, and since Little Steven knows what he is talking about, is a show coming from the guy who plays guitar for Bruce and was in the Sopranos, he gets the really big names as well. On any given week you may hear the Rolling Stones' Keith Richards or Iggy Pop (hey, who could refuse Little Steven an interview, if he asked you?). 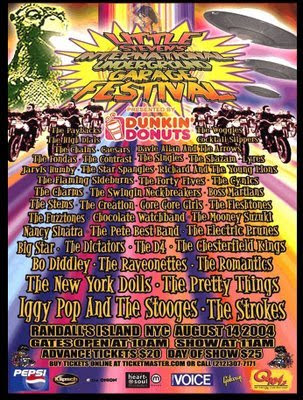 Little Steven has also managed to take his show into other mediums that support the excitement, fun and music of the radio broadcast. He now has compilations of newer garage rock bands that have been carrying the torch, and feature his "Coolest Song of the Week," and a really outstanding roadshow that has toured as Little Steven's Underground Garage Festival.

These concert fests bring a '60s styled light and sound show to life with films projecting sci fi B movies, live go go girls dancing onstage, and band lineups that are truly miraculous feats of putting together a spectacular festival.

At two of these fests, I managed to see two legendary acts that I never would have thought I'd ever get the chance see perform under any circumstances: The Zombies and The New York Dolls. Then there's all the really groovy and fun bands that are also on these festival bills. 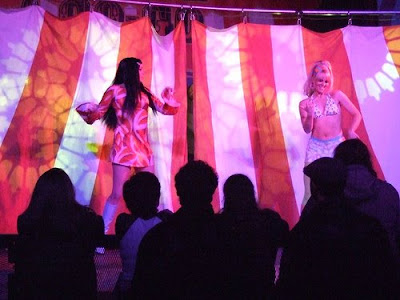 So while these two weeks are an anniversary celebration for the radio show, let us equally celebrate the bands and artists that have given us the music, the ingenuity and work that it takes to keep something of this high quality wonderfully alive week after week, and a man who has provided it all, Little Steven. My head still spins thinking of how much creativity is in his rock and roll head.

As well as the weekly on air shows, you can also listen to Little Steven's Underground Garage as archived shows online at the main site here. Listen, learn, enjoy and rock rock rock! As a sound clip from the end of the show always states so well, "That's entertainment. That's entertainment."