The Great Horror Family: Yet another wacky tv horror sitcom (!?) and one you may have missed...

There have been plenty of horror and supernatural television series that have had a great deal of wit and/or a tongue in cheek aspect to them (think The Night Stalker and its offspring, The X-Files) but an all out goofy, slapstick filled, bloody horror / monster sitcom?

You can pretty much count the television sitcoms that could be listed under "horror" on one hand.
In the sixties, when television genres really started to loosen up and take chances begetting successful shows involving witches, genies, spies and animated cavemen or flying squirrels, you had two of the best loved—and primarily the only ones most people can think of as straight up horror comedies: The Munsters and The Addams Family. Both of these classic shows exemplified the love and obsession with monsters that had viewers flocking to cinemas and drive-ins throughout the '50s and '60s and reading magazines such as the ones that help spawn the love, Famous Monsters of Filmland or the omnipresent kid staple, MAD.

For awhile it was monsters, monsters and more monsters—at least until the mid sixties James Bond spy craze took over and everyone needed a briefcase that contained a pop out throwing dagger. 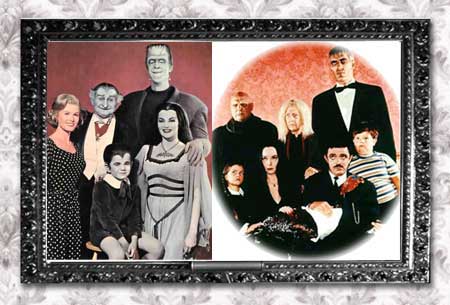 Both shows parodied the "typical" American family that had long been a staple of hit television shows. Once viewers had been softened up to having a Martian living with the family (My Favorite Martian) and the stone-aged Flintstones found success with their rewriting of Jackie "The Great One" Gleason's Honeymooners, it was easier to mess with formula and try out a goofy melding of horror and the supernatural on an all American family home. Still, these were both risk taking shows with The Munsters almost becoming an animated series out of fear of using real actors, and The Addams Family based on the very very black humor of the one panel comics of Charles Addams that ran in the New Yorker magazine. Bot shows ran concurrently and for the record, The Munsters, featuring a blue collar family, was more successful than the affluent Addams Family.

Fast forward through television years and you have virtually nothing in the way of a sitcom that could also be called horror. There have been some series that were branches of the Bewitched/I Dream of Jeannie supernatural tree such as The Ghost and Mrs. Muir with its mischievous ship Captain spirit, or The Nanny and The Professor with Hayley Mills' character as a nanny with psychic powers and perhaps, but never really explained, a background that hinted at something else such as extreme longevity ala a highlander. The mighty Simpsons can be included in this list of course, with their annual Treehouse of Horror specials. Then again, where is there a mention of genres, spoofs, plot devices or take on anything that would not include The Simpsons? 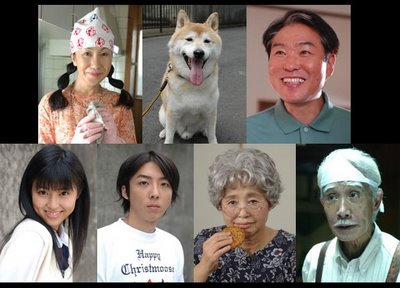 Japan's membership in this exclusive sitcom club comes by way of The Great Horror Family (Kaiki daikazoku). This series aired on Sunday evenings on Tokyo TV K.K. from October 3rd through December 26th, 2004. The series is the creation of Takashi Shimizu who first found worldwide acclaim with the popular Ju-on/Grudge series of videos and films, and wanted to be known for a little more than his creaking, long haired serious horror. Shimizu's ability to laugh at his own creations here is admirable. He also directed three of the show's episodes.

The primary plot begins with your basic ghost haunting premise: The Imawano family move into a new home and the previous tenants, who are a bunch of poltergeists, refuse to move out. Seemingly in line with most of these type of stories, however, from there, things take a left turn and anything and everything (and I do mean everything) gets mixed into the blender. 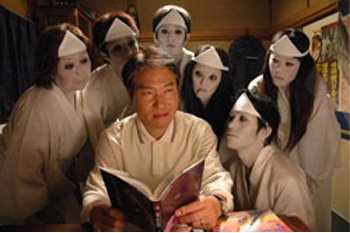 Here's a sampling of elements that get weaved in: (Yurei) ghosts, Buddhist monk ghosts, sibling rivalry, psychic abilities, aliens, Japanese cosplay lolitas, Japanese gothic lolitas, men in black government agents, zombies, a zombie bar, curses, goofy dads, Yokai monsters, supermodels and interdimensional travel. The acting is fun, the credits are groovy, the music memorable (does a catchier theme song exist anywhere else?) and the personal family relationships are handled as well as any Leave It To Beaver episode (with a twist). 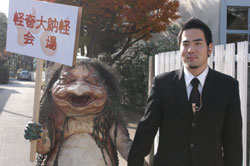 While some of the criticisms of The Great Horror Family are the shot on video aspect, cheap special effects, and head spinning tangential goofiness, I actually find these lend a more comical, engaging, and overall charming quality to everything. Being partial to all things Kaiju, Yokai and basically preferring anything that involves rubber suit monsters and balsa wood props (not to mention The Three Stooges/Sam Raimi school of humor) this series was a blessing and revelation-one that I can easily return to again and again. 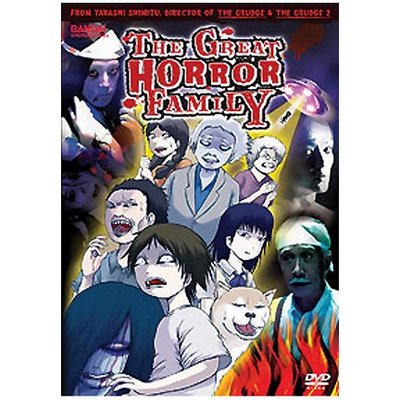 The Great Horror Family is currently available on dvd from Bandai Studios loaded with over two hours of bonus features. So while you're out shopping for that compete Munsters episode set, throw this one into your basket as well.