I Was a Teenage Movie Maker 2: Confessions of a Super 8 Freak

I Was a Teenage Movie Maker 2: Confessions of a Super 8 Freak

I had fun making amateur movies as a kid with my friends. Things were different then...were they ever. You see, video — that was something that was waay out of our league. Only grownups that had academic credentials used video. I saw that firsthand, observing the wacky hipsters who came into our 3rd grade music class videotaping our visit from the local Looking Glass Theater children's acting troupe. No, video cameras were out of the question. They cost unfathomable amounts of money, were huge clunky behemoths with accompanying heavyweight television monitors, and shot disturbingly poor grade black and white images. This did not meet with our colorful kid standards at all — video cameras were best left to the early German Krautrockers like Kraftwerk who also had room sized, hand built synthesizers.


My best pal, Bill and I, we had Super 8 real FILM cameras. We were gods. Of course third tier gods, mind you. We were not fortunate enough to have (from sympathetic film making fathers with some cash) hand me down glorious 16 mm cameras — and of course we could never afford such princely cameras on our meager allowances and paper routes (sure I also had a go at selling seeds and greeting cards but no big money makers were they either). Especially when we had to divide our finances on other passions such as model making, movie going, candy eating and music shopping. Otherwise, had we been able to move up the rung of the film camera hierarchy, we surely could have turned into our own local versions of Donald F. Glut (whose dvd I Was a Teenage Movie Maker is essential viewing). No, we were stuck with Super 8. We didn't know any better and we didn't care. We loved Jack Kirby and we felt like we were one of his — insert unpronounceable name here — gods. Add to the influence mix some classic Star Trek, Alice Cooper, KISS, Stan Lee and the then unknown to us mysterious folks who made all those groovy Godzilla films. Really, all we sought was a way to turn our personal comic book, TV and movie going experiences into short bits of actual, personally filmed artistry. 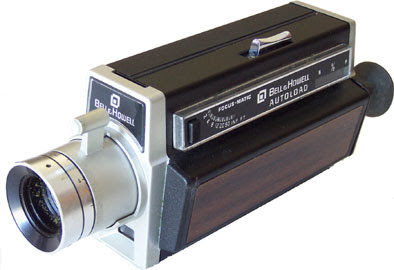 My camera of choice was sublime: I had (and it still exists in excellent condition) a Bell and Howell Model 374 Super 8 autoload camera. This baby was unreal, or so I thought. Super 8 cameras used easy load film cartridges as opposed to the previous Standard 8 film spools. The 374 had "Electric Eye" exposure (meaning a red dot for not enough light); a zoom lens 12.5 to 25mm; a f2.8 aperture and the BIG selling point — the "Focus-Matic." With this feature you would view your subject, press a button on the camera's side, read the distance, then turn the focus ring to that distance. A range of 2 feet to infinity. Pre auto focus and D.W. Griffith here we come!

We took our GI Joes (the ones that didn't end up in the basket tied with helium balloons never to be seen nor heard from since that is) and Mego Star Trek / D.C. comic book action figures (they were not dolls!) placed them in the backyard, and became low budget geniuses; at least that's how we perceived ourselves. The enthusiasm fired aplenty because we utilized this brilliant technique we had mastered on earlier films we'd shot. It was a grand technique of magical proportions — I shoot my friend standing or jumping / stop camera without moving it / friend leaves out of view / I resume shooting — hey, it looks like he freakin' disappeared, just like on Benny Hill! (notice here that we also watched Benny Hill). We "discovered" stop motion animation. 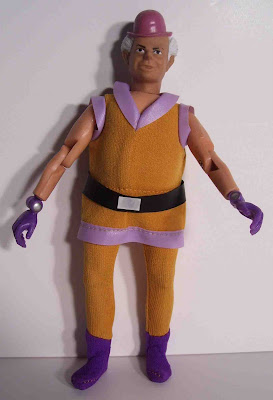 Our plots were thin, our sets were invisible. Sound was never an option. Hand written title cards and little dialogue. Loads of action, cool and easy to work with actors (oh yeah, did I mention we also came up with early cross overs ala Mr. GI Joe with lifelike hair and kung fu grip hangs with Mr. Klingon and Ms. Wonder woman, while my fave figure Mr. Mxyzptlk, plots from afar) and a usually rewarding ending with a big rock breaking up the party. They were cool films, that is when we finally got the chance to see them. The downside to everything was always due to the lack of immediacy in the entire process of viewing our masterpieces. You shot the film, unloaded the camera and sent, or dropped the film off for processing. That sucked badly and no amount of nostalgia can replace the lousy interminable wait we experienced to get our precious art back. There were no daily rushes to view in our naive world. Somehow I also used my funky editing station (with attached central viewer, just like the real ones!) to work at shaping, and finishing our little film gems. This was fairly difficult seeing how the actual Super 8 film stock was so tiny and insanely troubling to work with. I persevered however, and we managed to complete quite a few of these films. Of course, we never did measure up to the output that someone like Don Glut managed to churn out. Had I known of Don at the time, perhaps I would have viewed his as a rival film studio that we needed to compete with, but instead I soon discovered guitars and the beauty of sidetracked interests.

So personal video camcorders did evolve rapidly over the years from the time of my first encounter with the Looking Glass monster, but I still resented them. From the huge and heavy VHS giants, to the smaller hi 8 versions — the costs never seemed to warrant the device and you still needed to feed the things with their required blank media. Ok, I could get behind Pixlevision, but that was about it. I did return to the filmmaking bug later by gaining entrance to the elusive 16mm club, but that's is for another column. 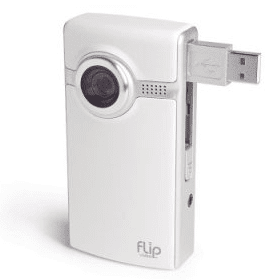 This past Christmas my girlfriend's brother gave me a Flip "Ultra" digital video camcorder. Small, thin super lightweight and in a very cool, glossy white finish that's like some stylish mod Italian furniture from the '60s. It has a 2 GB internal HD for 60 minutes of shooting time. It is blessed with simple one touch recording, a digital zoom, in camera playback or delete and a 1.5 inch no glare screen. The base has a mount for a tripod and the sound quality that the Flip captures is pretty great. Downloading your videos are via the no cables needed USB snap out arm.

This is not a full on review so for now I won't go into any plus or minus/good or bad qualities or put it to any type of test. I have used it and so far really love it. I got some really nice footage at a recent concert by The Raveonettes.


I intend on taking my 12" GI Joe with lifelike hair and kung fu grip (anniversary reissue); my two large Godzilla figures (the rare ice blue and Arctic white ones); and a few classic Ultraman figures and using this Flip Ultra to shoot some good old fashioned, stop motion (with sound!) low fi crossover classics that may even make The Glut proud. I shall return in a future column with a sampling of these amateur undertakings. Until then, be happy you also didn't have to splice endless lengths of Super 8 film together. Well, at least I wasn't a Standard 8 user. How those poor clods really must have suffered...
on November 08, 2012