TajTunes: The Singing Telegram with a Happy Twist

India is a nation where music and song are ingrained into everyday life and virtually inescapable to the resident or traveling visitor. From outdoor market stalls and back alleyway shops, there are loud speakers often set up somewhere providing a daily soundtrack for the passerby. From business district to humble doorway, there are performers or non performers singing, chanting or at the very least changing the cassette or cd of their funky windowsill boombox.

It is nearly a prerequisite that most of the films released in the Mumbai based “Bollywood” feature song and dance sequences, regardless of the subject matter or genre, that will often tie into becoming massive selling soundtracks and popularly known songs throughout the gigantic country.
In keeping with this spirit of daily musical delight and escapist love of song and dance comes a happy company called TajTunes...

TajTunes' musical story exists at the opposite end of a Bollywood spectrum - where at one pole exists the glossier, slicker, but no less enchanting, A.R. Rahman soundtrack that will doubtlessly find the ears of the worldwide film going multitude now that Slumdog Millionaire has garnered a stunning 8 Oscars (out of 10 nominations) including Rahman's work for Best Soundtrack and Best Song – and at the other pole, a wacky, singing telegram that costs almost nothing and provides wonderfully worthwhile entertainment and good feeling for both sender and recipient.

In 2006 MIT graduate David Hui, began his Cambridge, MA based TajTunes company as more of a jokey, lighthearted way of utilizing the personal assistants that he had originally hired from a call center in India to do tasks such as making appointments and keeping restaurant reservations. Turning the idea of outsourcing inside out, he came up with this long distance, personalized singing telegram. The idea is brilliant in its simplicity and fantastic as a service.

You go to the official TajTunes web site, pick your song occasion with seven categories to choose from for instance, Birthday / Appreciation / Encouragement / Love etc. then narrow done your selection to a specific song within the category i.e. “Super Duper Job” or “Cupid's Arrow.” Enter your sender information, the name and telephone number of your lucky recipient, and the day that you want them to receive the telegram. Cost is always a mere five dollars via Paypal or plastic, less than some boring paper greeting cards, and on the specified day the live telegram is delivered from the call center in Bangalore, India to the person's telephone. 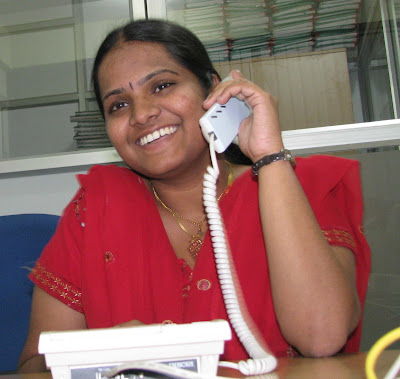 They answer and get a strangely unique song delivered by a man or a woman with a distinctly Indian accent. Should you not be around for the call, it is left for you on your voice mail – equally delirious and equally fun – and the song is later emailed to the recipient as a digital file...hooray! and thanks for the memories!

I came up with some questions: First for the Bangalore, India call center (thanks Anukool!), and second for the management located stateside. Special thanks to Helen Hames, VP Marketing at TajTunes for her friendly help in making this all happen.

Questions for the call center staff:

Too many folks think of "outsourcing" in such a negative way, yet this service sheds an entirely new light on the idea...any thoughts on this?

Anukool: I can’t think of a better gift to send a person than a song sung live over the phone by a person far away. And the digital copy, sometimes with crazy reactions, really adds to the fun of the whole experience. That’s what makes TajTunes different. Every song I sing is different and I make them my own by adding interesting sounds, etc. It’s much better than reading a script over the phone 100s of times a day.

Do any of the call center staff have musical backgrounds?

Anukool: None of the singers are professionally trained but some sing in a choir and all of us love singing.

How do you choose who gets to sing which song?

Anukool: Basically, we would like to sing every song. However, as we practice new songs it becomes clear that there are some songs that are better suited to a specific singer, in that case the singer becomes an “expert” and that singer is assigned that song.

What's one of the most startled, excited or strangest reactions upon getting one of these messages?

Anukool: During one of the calls, the receiver went crazy screaming in joy, clapping and asking us to repeat so that other people around him can also listen to it and have fun. It really made my day!

Questions for the management:

Too many folks think of "outsourcing" in such a negative way, yet this service sheds an entirely new light on the idea...any thoughts on this?

Helen: This is really why TajTunes.com was founded. TajTunes lets people in the US send surprise greetings delivered by phone from half way around the world for only $5. It’s a form of outsourcing that puts smiles on faces and provides a positive experience all around.

How many songwriters are involved in this service?

Helen: We work with a variety songwriters all based in the Boston area. Right now there are 3 main composers we work with but we work with others as well.
Any new songs being planned for the future?

Helen: Yes, we release songs on a regular basis so there’s always something new and fun to send. Many of the songs composed are based on ideas from our customers.

Part of the appeal is that $5 seems so reasonable for this service, as much as any paper greeting card. Are there any additional price levels or packages planned??

Helen: The other point I’d like to add is that TajTunes is a totally eco-friendly way to make a connection. Right now we deliver a singing telegram for $5 but it’s not out of the question to add other features to make the experience even more enjoyable. We’ve had some great suggestions from our customers that we plan on adding over time. Stay tuned.

Emily Seah said...
Awesome! I know I personally got a kick out of the Valentine's greeting I received from TajTunes recently...it really cheered me up when I was sick on Valentine's Day and unable to go out and celebrate with my honey. The guy from TajTunes really threw his heart into it and sang with gusto. :)

Robert Jaz said...
Thanks! This really is a very cheerful service.
Yes, these are the actual Call Center singers. I should have listed their names as they appeared for the pic - here they are: Anukool, Parimala, Singson and Suresh.