THE UPPER CRUST: My Favorite Musical Acts I Will See Again and Again. Part 2.

THE UPPER CRUST: My Favorite Musical Acts I Will See Again and Again. Part 2. 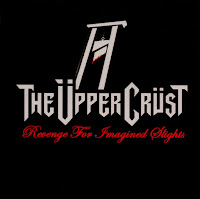 Don't Give Up On Live Music!

Caveat lector! This column has nothing to do with pizza.

It has to do with a band. An enormously talented and ingeniously witty band out of Boston called The Upper Crust.

One month ago I began this series of columns that would each cover one musical act that I would gladly go to see in concert over and over again.

As previously mentioned in an earlier episode, in deciding which acts should go into this list of live favorites, these are my prerequisites:

1) They are still currently making music I like and are touring live.
2) I've seen each more than a few times.
3) All stand out with a unique sound, presence and charisma. 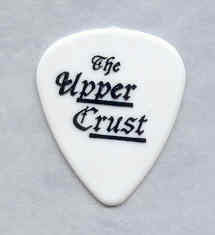 Some facts about the group

(as recorded in the great book of all things that do R-O-C-K): 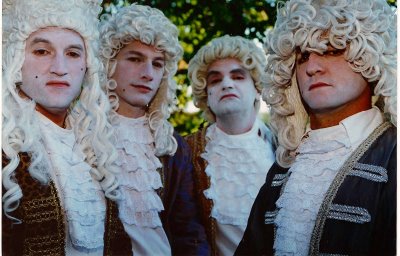 The Upper Crust began life as a fully formed unit of privileged and quite snobbish aristocrats in 1730, performing their self proclaimed Rocque and Roll under the influence of the great past masters—primarily AC/DC (Bon Scott era) and also that of KISS, Spinal Tap and Alice Cooper. As befits such men of leisure, they only appear in the finest of powdered gentlemen's wigs and attire, while amplifiers are covered in only the best brocade.


Previous members included The Marquis de Roque and Lord Rockingham (who, coincidentally, became a speechwriter for Bill Clinton in the latter days of the Clinton White House. There is photographic proof of this).


They are among Conan O'Brien's best loved bands and have appeared on Late Night with Conan O'Brien and The Late Late Show with Craig Ferguson.
They starred as themselves in an episode of the Cartoon Network's Codename: Kids Next Door.

They have six albums including Let Them Eat Rock (also the name of a documentary about the band); The Decline and Fall of The Upper Crust; and the live Entitled.

Song titles include many magnificently composed gems such as "Rock and Roll Butler," "Friend of a Friend of the Working Class," "I've Got My Ascot 'n' My Dickie," " Rabble Rouser," "Persona Non Grata," "Matron," and "We're Finished with Finishing School."

One of their songs, "Eureka, I've Found Love," is a bonus unlock in the Guitar Hero videogame. 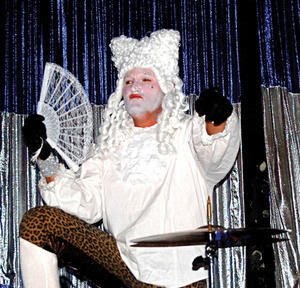 Luckily for most of us, they happen to enjoy slumming amidst the peasantry, entertaining at the lowliest of our booze palaces and gin halls—as best summoned up by the band's own philosophy "If not great and excellent, then debauched."

So sure we may be living in one of worst economic downturns since the Great Depression, but think these guys care? Not one whit.

Consider yourself fortunate and bow to the new oligarchy.


The Upper Crust's ministry of information can be accessed here.
on November 10, 2012