Everything in life always comes back to The Three Stooges...

We all know how much Sam Raimi loves a good, old fashioned, ancient and horrible curse. The type that has been unleashed by some unsuspecting chump.

Nothing like a good curse plot to wrap a film around. Curses seem to bring out some of the best in Raimi's work, from his early first feature, Within The Woods, through all of the Evil Dead masterpieces, to his newest film Drag Me To Hell.

The other major influence on Raimi's work has always been the ultra violent Columbia comedy shorts of The Three Stooges: Moe Howard, Larry Fine, Curly Howard, and who can forget that most underrated of all Stooges, Shemp Howard.

The release of a new Sam Raimi directed film is usually a cause for celebration.
Since it is also one that returns to the genre that has made him renown—horror with a touch of some good old fashioned slapstick cartoon absurdity—I thought it a perfect time to look back at some of the director's earliest film work.

Sam Raimi began making films as a kid in Michigan with a silent 8 mm camera and then a Super 8 camera he received from his dad. Seeing his dad's simple home movies began the desire to persue an interest in this strange world of capturing life and transferring it to an altered reality that could live forever.

In junior high and then later at Wylie E. Groves High School, he had befriended another boy who also was making Super 8 films with some friends, none other than Bruce Campbell. It was a shared interest in all things Three Stooges that brought the two together.

Raimi, his other neighborhood friends all shared this love for comedy and in particular the Stooges' timeless masterful slapstick, and often inappropriate version of violent comedy. As with most kid alliances, it was not a perfect match up of creative minds at first, but soldiering on around 50 short super 8 films were made by Raimi and his friends throughout these years. His first film, "Out West" was a nod to The Stooges' western shenanigans. As time went on and many of these Stooges' shorts had been made, the themes became more absurd and less directly Stooge but still comically insane. Film subjects included Nazis, mafiosos and a telling of "The Jimmy Hoffa Story." By this time Sam's younger brother Ted had also entered the fold.

Attending Michigan State University, Raimi and his pals formed the Society For Creative Filmmaking. They continued to make the shorts. Charging fellow students an admission price to see these films actually payed off when one of the the more "professional" of the films entitled "The Happy Valley Kid" ended up turning a small profit. Further films would include "It's Murder," and "Six Months To Live." 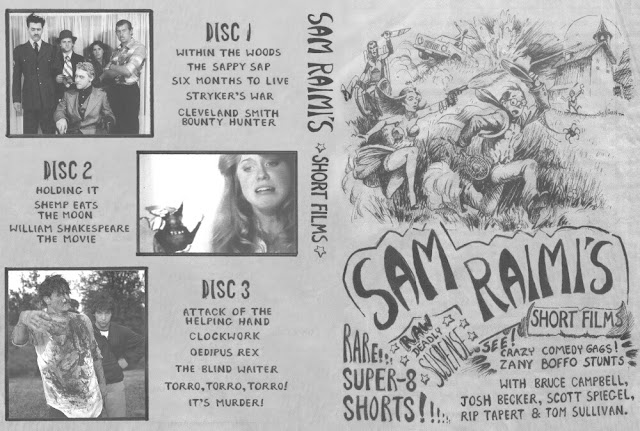 During some summer months, Raimi, his roommate Rob "R.I.P." Tappert, an older brother also attending MSU, Ivan, Campbell and their other SFCF friends studied drive-in Italian horror movies attempted to replicate them via the film "Clockwork." Even though comedy was still the first love for Raimi, horror was seen as something that was a money maker and a foot into the doorway to the world of making a living as filmmakers.


It was also in these summer months that the concept of the "Fake Shemp" was also applied in the Raimi and company films. There was a point in the original Stooges' shorts, these being the ones after the Curly years, and with Shemp Howard, when Shemp had died leaving a number of unfinished shorts. Columbia decided to forge ahead and still make these shorts using a lookalike actor standing in for Shemp. Shots used the back of the actor's head and old spliced in real Shemp dialogue was spliced in. Problem solved for Raimi when any of his friends/actors had to go away for the summer months and filmmaking had to proceed as scheduled. Raimi has continued to use both the term and the concept for most of his features.

A lecture by one of Raimi's ancient history college professor's gave the filmmaker the concept of the Sumerian Book of The Dead, which was a series of scrolls dealing with the afterlife and the netherworld in Sumerian culture. Raimi matched this basic info with the thought of a chump stumbling upon this book by accident, and thereby came up with what would be the basic plot for the BIG film project entitled...you guessed it, The Book of The Dead.


The film would later be retitled Evil Dead after completion in a search for better distribution. 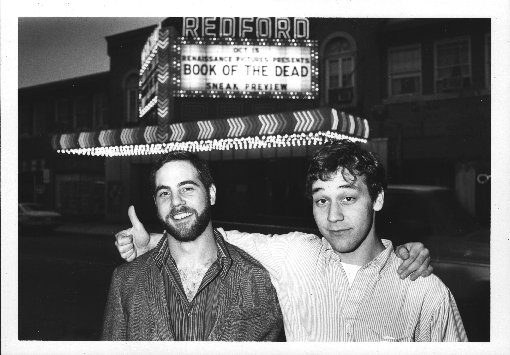 
In order to raise money for The Book of The Dead feature, a 30 minute "demonstration" version was shot to show to friends, family and anyone else who could help with financing. Though extremely low budget, Raimi still used similar special effects, camera work, and sound for this film, Within The Woods.


Initially appearing as a double bill with some screenings of the Rocky Horror Picture Show, but pulled, the film is unfortunately still unreleased due to a variety of musical rights issues. Within The Woods was effective enough, however, to get Raimi the attention of Stephen King who, among others, helped in raising the funds that would enable Raimi to go on to make his successful and legendary Evil Dead.

In 1980, after the filming of Evil Dead was completed and prior to its 1981 release, Raimi, Campbell and the gang made a film called The Blind Waiter. The film was a goofball return to their roots of Stoogedom and the old Super 8 shorts of their past...


For it is a well known fact that once you discover the ancient curse of The Stooges 3, you can never ever escape the call of the "Nyuk Nyuk Nyuk."