Yazoo Records delivers us THE STUFF THAT DREAMS ARE MADE OF

THE STUFF THAT DREAMS ARE MADE OF

This piece was originally published April 22, 2013

When I think of the most obsessively fanatical collectors that populate our planet, I have to give the prize to record collectors.  Even well beyond folks that seek out rare comic books, watches, autographs or toys, it is the passion of music enthusiasts seeking out that rare vinyl LP, forgotten release, or long thought lost recording, that can turn many an individual into a deviously sneaky, frothing at the mouth, crazed addict.

As evidenced by this past weekend's annual holiday for the record collecting fan,Record Store Day, turnouts around the world were huge, as independent music shops celebrated what has become thier biggest retail day of the year.

Folks swarmed shops everywhere in an attempt to purchase the many exclusive limited edition vinyl titles that record labels the world over released on this special day.

Music fans are still crazy for vinyl, and the demand for LP's and singles is increasing by the year.

While these days it is often about numbered editions on colored heavyweight pressings, reaching back past the era when 33 & 1/3 vinyl LP's and 45 rpm. 7" singles became the norm as formats, there was the mighty 78 rpm record that ruled the marketplace.

Collectors of this format often include those looking for recordings from around the world, early jazz sides or as with the case of these two fine compilation collections—American folk, country and blues from the 1920's and 1930's.

Yazoo Records has been in the business of primarily reissuing many of these rare 78 rpm records since the late '60s. 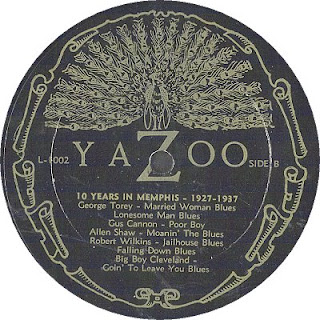 The Stuff That Dreams Are Made Of is a two disc compilation of these early records that has been compiled and released by Yazoo.

Sub-titled "The Dead Sea Scrolls of Record Collecting," here we have a set of what is a thoroughly researched, annotated and painstakingly cherry-picked number of what collectors the world over have deemed to be the rarest, the most difficult to find, in the case of a few heretofore unknown Son House tracks, recordings that were believed to not exist at all.

There are so many incredible tracks here from the likes of extremely talented acts, some with familiar names,Sleepy John Estes for instance, and some with names that deliriously describe a fruitful period in our country's musical history, The Three Stripped Gears, Freeny's Barn Dance Band, Georgia Pot Lickers and Middle Georgia Singing Convention No. 1.

I am reminded of the mid to late 60's psychedelic era when band names reached a peak of colorful monikers, as in The Strawberry Alarm Clock or Lothar and The Hand People.

Famed cartoonist Robert Crumb has not only been an obsessive collector of this music for decades, but he also played in string bands that performed this music. So it comes as no surprise that the great genius would have one of his illustrations adorning the cover to this set.

It seems that the response to Stuff... was so overwhelmingly positive, Yazoo recently released a second volume of rarities entitle Return Of The Stuff That Dreams Are Made Of.

Once again, superlatives fall short in describing the aural wonders present on yet another collection of these records.

These records have been preserved here with all their hiss and crackling intact, a factor that certainly helps retain the original state of the valuable originals from which they have come.

Adding an eerie, creepy quality that lends itself to the process of rarity and discovery, it also hearkens back to a distant time that seems far removed from our own experiences, yet the subject matter dealt with on this material still resonates for today's listener: Being in love, lost love, looking for love, needing to find love, needing to find liquor and laughs, getting the blues, chickens running around the barnyard, dirty criminals, thinking about religion and eventually shuffling off this mortal coil.

Americana from the soul, so there is little surprise that this is the music that has influenced and continues to influence countless musicians and songwriters, from Bob Dylan, Eric Clapton and Duke Robbilard to Jack White, Wilco and Mumford and Sons.

Each set has a remarkable booklet that includes stories about collecting obsessions and interviews with the collectors that are drawn into this world.

The fine folks at Yazoo Records have thankfully undertaken the heroic task of compiling these fascinating and enjoyable jewels for the rest of us—a task which can be savored for a mere micro fraction of the money spent finding the original records, let alone the voluminous hours it takes to track them down in the first place.

Kudos to Yazoo for bringing these beauties to the marketplace, and kudos for anyone that allows their curiosity to purchase both of these collections.

Though Charley Patton sings on set two, "Some of these days I'll be gone," it is with a blessing from that great record collector in the sky that these rare records are able to remain with us...