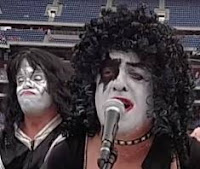 Normal Halloween Activity: Putting on makeup, wigs, costumes, grabbing a big cheesy prop or two and getting to pretend to be someone else.

Normal Tribute Band Activity: Putting on makeup, wigs, costumes, grabbing a big cheesy prop or two and getting to pretend to be someone else.

In the past, I'd often deride and ridicule the many "tribute bands" that have come and gone (or are still around) throughout at least the last three plus decades. I would think of them as the performing arts' Lowest Common Denominator of bands.

I felt that while the old saying goes, "Imitation is the sincerest form of flattery," the truth was closer—or so I believed—to a lack of originality, a complete loss for creativity, an inability to compose original songs, and a desire to just be a fan(atical) cog in some misguided pop dream machine.

For a number of years now, due to a few reasons, I've had a change of heart here at The Mystery Box H.Q. I have seen and experienced some incredibly talented and focused musicians playing in some really great tribute bands. They can be both fun, seriously good, and above all worthy of a music aficionado's attention.

The variety of tribute bands out there is staggering. There are the tribute bands doing some obscure cult act that held a brief lifespan and were seen by a very few at the time, tribute bands who tour the world with a huge stage show and earn a full time lucrative living (even with benefits!) and tribute bands who allow a mega band's music to be enjoyed live in a small venue for cheap by a multitude of working class punters while the original act has grown far too big and can only be seen at a high cost premium in huge sold out stadium shows.

One such example of the later would be The Blushing Brides, who along with a really great Mick Jaggerish front man and fantastic sidekick Keef guitarist, allowed me to see a great Rolling Stones show when there was no way I could easily ever get tickets to see the real thing.

Ah, there have been some gems along the way.

Killer Queen managed to (and in a tiny club no less) put on an amazing version of a Queen concert that included all of "Bohemian Rhapsody" including the middle "I see a little silhouetto of a man..." layered vocal part done live by these four musicians. Now, I had the chance to see the real Queen (in their pre-mustached Freddy Mercury glam rock heyday) twice, and for the record, they NEVER did that part live. The smoke would fill the stage, the band would exit while a recording played the part, then Queen would reemerge for the "So you think you can stone me and spit in my eye" big rock finale. Yet, this tribute band reproduced the studio recording live in a feat that was astonishing to say the least.

Diver Down, a classic Van Halen tribute band, had a vocalist who constantly bellowed to the crowd during their set, "Fuck that Sammy Hagar shit, we only do the David Lee Roth songs man!" and so they did throughout the rockin' night.

There was The Alice Cooper Show, put on by a fan who succeeded at bringing to the stage a no budget version of Alice's big extravaganzas. One that included some low rent handmade props (a guillotine and I recall a fake snake) along with an actress/girlfriend to toss around the tiny stage.

So while there are a thousand bands that may still be deserving of derision, many are pure cool. Here then, are a few of my fave tribute bands that I believe rise above the norm and into a realm that is pure sideshow kitsch...

Yes, they are indeed a KISS tribute that is made up of little people bedecked in KISS costumes and makeup. The crème de la crème of tribute bands (right up there with the huge spectacles that are The Pink Floyd touring tribute bands such as The Machine and Pink Fraud), Mini KISS is the brainchild of the inimitable Joey Fatale (4' 4" - Gene Simmons).

Their official web site is here. Need I add more? 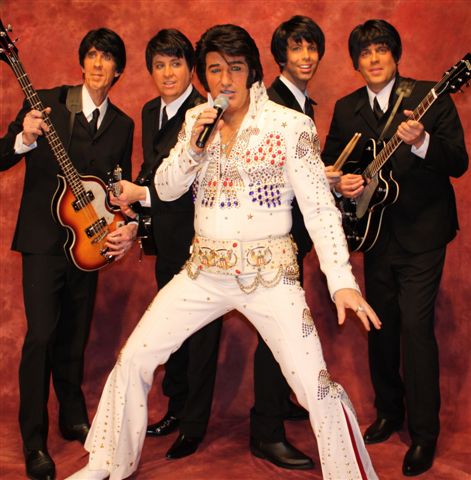 A dream come true for fans of both legends—The King fronting the Fab Four is an act that can only be described as put together by God.

I would venture to guess that the largest number of tribute bands in this world would be dedicated to The Beatles. Sadly, I have yet to find one dedicated to the great Tiny Tim, but I still hold out hope...

The Land of the Rising Sun features enough tribute bands to create a small country. Here is Japan's answer to a straight up Iron Maiden tribute as fronted by the Bruce Dickerson coiffed frontwomen "Tyranny." I love them. 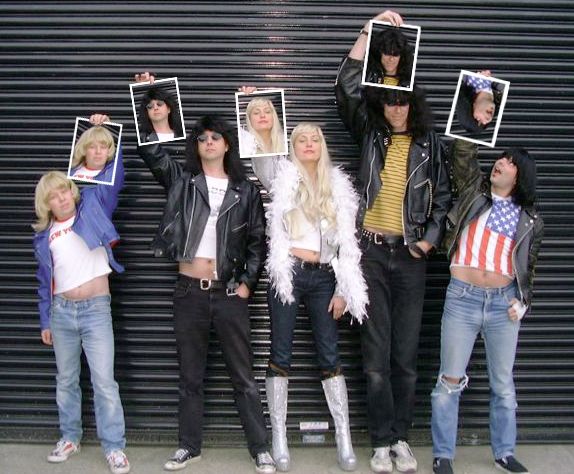 This British band does ABBA covers in the style of The Ramones. Makes perfect sense doesn't it. Both legitimate with albums and overall a great band. Check out their official web site. I have never been a fan of the real Metallica. Here we have two blonds in evening gowns performing a Metallica tribute on their harps and I am a fan. What's not to enjoy?

The Hot Rod Show featuring "look alike" George Orr as Rod Stewart. Or, as their web site better puts it, "All Rod, All Live, All Night." Lastly, but certainly not leastly, and in keeping with my October Halloween theme, comes this astonishing group from the U.K. 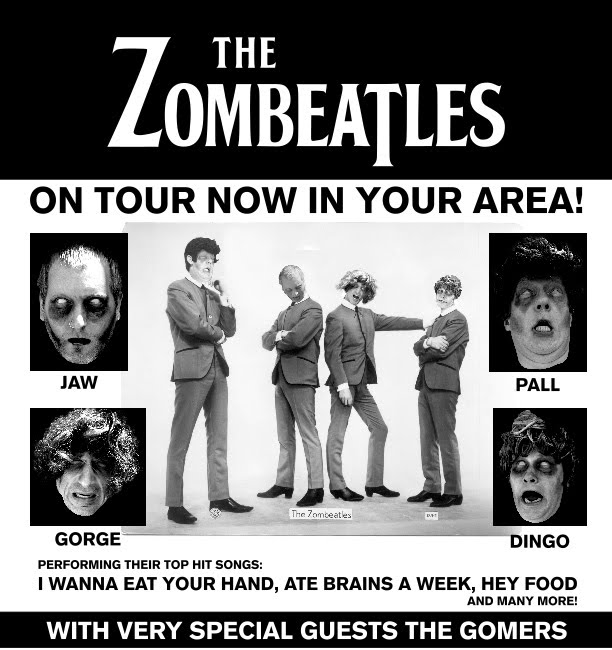 There are a zillion other tribute bands and acts worthy of mention, but for now, I hope you've enjoyed the ones that are the real pips. 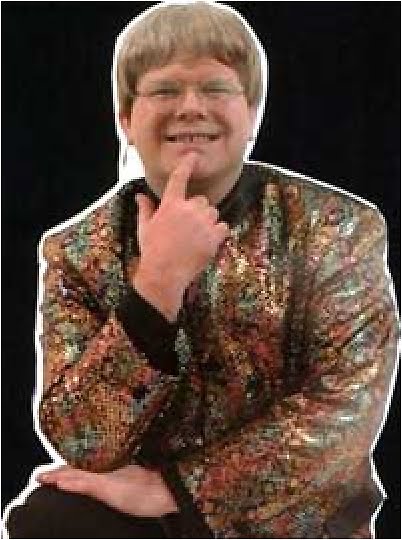 According to his management, Johnathan Kane of West Yorkshire, U.K. likes his E.J. to be paired with the Rod Stewart cover band Michael Dean of Doncaster, U.K. 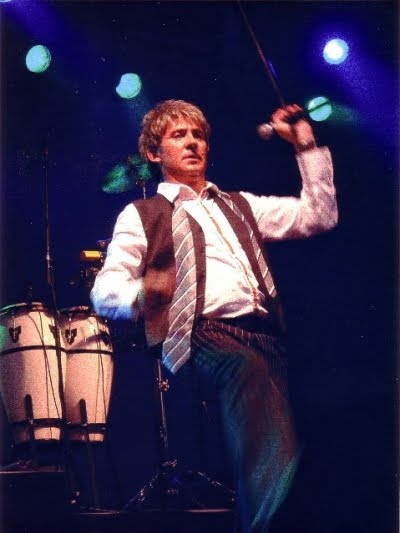 Michael Dean of Doncaster, U.K. does Rod The Mod and according to his management, enjoys being paired with Tina Turner tribute artist Niqi Brown.

Stay tuned to The Mystery Box for future sightings which I will be sharing with you all.