THE REPLACEMENTS: REUNITED FOR SLIM

THE REPLACEMENTS: REUNITED FOR SLIM Formed in 1979 in Minneapolis, Minnesota, The Replacements were one of the great groups that merged a love of classic rock, hook-laden bands such as The Beatles ( they named one of the albums Let It Be ), The Rolling Stones, and Badfinger with the proto-punk of The New York Dolls and the more recent snap of The Ramones, The Clash, The Jam and The Dead Boys.

In their early sloppy, alcohol-sopped party rock days, when they weren’t downright terrible, they could be a short distance from their musical heroes, The Faces.

Rod Stewart and The Faces defined great drunken Rock and Roll
When they summoned up a melodic beauty in a song’s refrain, they could reach the cosmos of one of their other major influences, Big Star Big Star with Alex Chilton (right)
Through their earlier days the line-up was founder/guitarist Bob Stinson who, in an effort to keep his little half-brother out of trouble, presented Tommy Stinson with a bass. Adding their friend, guitarist turned drummer Chris Mars, the new band, Dogbreath, would cover Ted Nugent, and Aerosmith, standard stuff for 70’s kids to play.
Paul Westerberg would eventually join Dogbreath, and eventually become both the main vocalist, primary songwriter and second guitarist. After discovering all the British punk bands also including The Damned and Buzzcocks, they became The Impediments and then, after being fired and banned from a church hall venue, they became The Replacements. The Replacements tear it up n the early ’80s
After signing to the Minneapolis based Twin/Tone Records, the band would travel though several releases that saw them in search of a sound. They had embraced faster hardcore, tried to emulate the speed that was defining their friendly rivals, Husker Dü. Wallowing in booze and drug scorched live shows, and though still in love with the earlier bands that defined their tastes, their confusion led to records that had yet to distinguish their future brilliance, although for some folks they are still worthwhile albums. Revisiting them now, they sound much better than I thought at the time. The Replacements’ first single and studio album
Their second album 1983’s Hootenanny, was the tipping point. Westerberg stretched his songwriting to include more variation, more hooks and the result was an album that found more fans and notice but a band still not quite so happy. The Replacements continued to tour, party, antagonize and after an unsuccessful club tour supporting R.E.M. in 1983, moral was low and the band was possibly on the verge of a breakup.
Tired of the loud/fast rules motto, and influenced by R.E.M.’s subtlety and variety, the band tried out newer instrumentation, and Westerberg’s new material reflected a more sincere band that no longer cared if the punks thought they were cool or not. The Replacements: Tommy Stinson, Chris Mars, Bob Stinson and Paul Westerberg on the floor
Then the triumphant trio of superb albums that I hold as personal faves emerged: 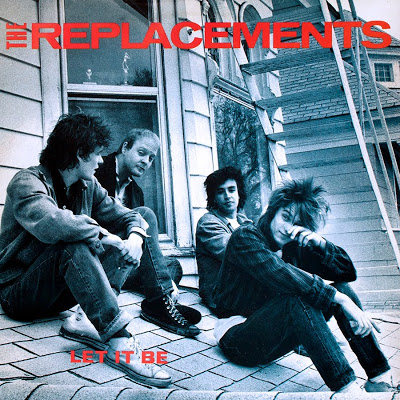 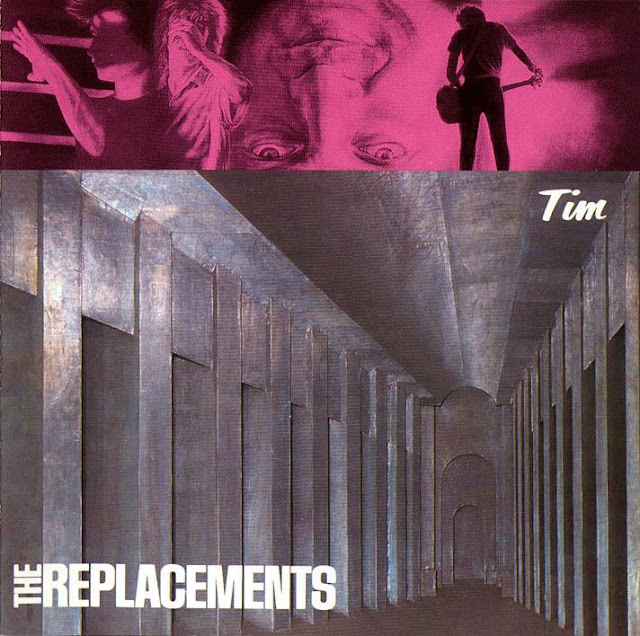 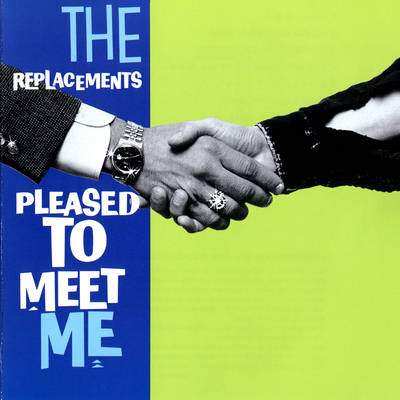 The winning trifecta
Filled with masterful songwriting, locked in performance and a bravado that replaced goofy antics with assured connection to the influential bands that they worshiped initially. Here were records that could bring you to tears or soar you into the sky.

Trouble is, behind the scenes and onstage all was still not well. all was not well behind the scenes. after Let It Be’s release, though things were looking up, there was still excessive partying, shambolic live shows, low incomes and finally, a switch from the indie Twin/Tone label to the major label backed Sire Records.

After Tim came out on Sire, the band fired their founder Bob Stinson for too much partying and an unwillingness to perform the slower material. The group soldiered on, changed producers (Tommy Ramone produced Tim) and became a trio for another remarkable album called Pleased To Meet Me. The Replacements with Slim Dunlap in the back
For Pleased To Meet Me, the band called in fellow Minneapolis guitarist journeyman Bob “Slim” Dunlap, an older, wiser musician who had an influence of Hank Williams and Keith Richards, and was monikered as “one of the last old-school cool guitar players.”
Slim would start out as a guest player, but then become a full time and well–respected Replacement. With a classic single “Alex Chilton” that paid homage to the Big Star / Box Tops vocal legend as well as having Big Star producer Jim Dickinson at the helm, the album was a wonderful mixture of all the elements that made the Replacements a stellar band. .

Pleased To Meet Me, as it usually is for the best ones, was not the Top 40 hit the band was hoping for, but this trio of albums, like the early Ramones albums that were also not huge selling hits, will always continue grow in acclaim, influence new listeners, make top 50 best of lists and assure that the band would be immortalized forever in the pantheon of memorable rock bands. Don’t Tell A Soul: Terrible cover, mediocre album
The next album, Don’t Tell A Soul (1989) was a glossy lackluster album. Westerberg was seemingly running the show and the production reeks of a slick 80’s type that brought an unwelcome sheen to many a good band releasing albums during that period. A tour with Tom Petty and The Heartbreakers didn’t turn out to be the right move.

The final album, All Shook Down (1990) was recorded largely by Paul Westerberg with session musicians. Westerberg realized the end was near and came up with a great album that reflected the finality of the group. While All Shook Down sounds more like a solo album, still it has a beauty with it’s emphasis on acoustic instrumentation that the previous album never came near. It would signal the future solo work of Paul Westerberg.

Drummer Chris Mars quit, and was replaced by the late Steve Foley for a lengthy 1991 farewell tour after which Tommy Stinson would then quit (Tommy went on to form various bands, play solo and join Guns N’ Roses!) and the band officially ended.

In 2006, Mars, Westerberg, Stinson with Josh Freese on drums recorded two songs for a best of compilation, although it was never really thought to be any sort of official long-lasting return. Tommy Stinson and Paul Westerberg promoting a good cause
Sometimes it takes a selfless act for another to rise above the petty squabbles and arguments of the past. So seems to be the case when Slim Dunlap suffered a bad stroke in early 2012.

As The Replacements, Paul Westerberg and Tommy Stinson, decided to help with Dunlap’s medical bills.

Chris Mars, who left music to continue to work on his highly successful, prolific career as a painter (Captain Beefheart did the same thing when he left music for painting) didn’t want to be a part of the recording reunion, but did agree to contribute to the release with a beautiful new solo recording and artwork. This 10″ 5 song vinyl E.P., called Songs For Slim, was pressed in a limited edition, singed and numbered run of 250 and then auctioned off on eBay.

The Song For Slim Project will be an ongoing project that will also release split 7″ singles by musicians such as John Doe, Frank Black, Lucinda Williams, Steve Earle, NRBQ, Jakob Dylan, Peter Buck, Deer Tick and others to continue to raise money for Dunlap’s long term care.

The Songs For Slim E.P. will be available later in the year for general purchase and the band is not ruling out a new album and tour.

Thoughts and prayers go out to Slim Dunlap and his family.