On Tuesday, January 8th at 5:00 AM, David Bowie, on what was his 66th birthday, gave his fans around the world an unprecedented gift by suddenly releasing a single, with an accompanying video and new photograph, on his web site and for immediate download purchase on iTunes.

The song was simply added without any notifications or press releases.

As I saw the video and listened to the song, with those incredible, familiar sounding chords, I knew that, for myself, 2013 was already off to a great beginning. For here was never expected new music from one of my top 5 favorite artists that I have revered since I was an inquisitive little child staring at the strange alien-like being depicted on the American LP cover for his Space Oddity album.

Presented was this fantastic surprise that is truly one the best kept secrets to ever have been tucked away by any legendary mega-selling. hugely influential musical performer long thought to be retired and finished with making music. Especially in this era of instant reporting, gossip leaks and everyone as a news photographer with their cell phone cameras, it is all the more remarkable that Bowie, who had last released a studio album of new recordings ten years ago with his album Reality, was able to record undetected over what is now said to be the last two years in New York City.

On Bowie's web site appeared a single called “Where Are We Now?” and a video for the song that was directed by past Bowie collaborator, New York multimedia artist, Tony Oursler. There was also a link to purchase the song or pre-purchase the forthcoming album entitled The Next Day on iTunes.

What?! A new album with track listings and a release date too! Like a puzzle that only gives partial clues en route to a grand solution, the link took fans to the iTunes page that had track listings for the entire album, to be released in March, with only the sole single that could be heard (the rest of the tracks cannot be listened to as samples) and downloaded along with the video, and the album’s mysterious sleeve.

Here was a beautiful, fragile ballad, video and LP cover that obviously references his “Berlin Trilogy” of albums—the albums Bowie recorded from 1976-1979 while residing in West Berlin near the Berlin Wall in the late Seventies, Low, Heroes and Lodger. A time when Bowie was himself fragile, kicking a cocaine addiction and attempting to live a more normal life out of the limelight that was part of his infamous stardust past. Supposedly, even learning such mundane tasks as having to do the dishes were a new part of his lifestyle change. Keeping a Low profile on one of my favorite Bowie albums Lodger, another Bowie underrated masterpiece
This trio of challenging, yet profoundly innovative albums were primarily recorded in France and mixed in Berlin with production, songwriting and vocal help from Brian Eno and Iggy Pop, another music legend attempting an addiction free solo album comeback.

Alongside Bowie’s albums, the first two solo Iggy Pop albums, The Idiot and Lust For Life would also result from this Berlin period. Now widely regarded as some of Bowie’s best work apart from his early Glam days with Ziggy Stardust, or the cocaine fueled Euro funky Thin White Duke of his previous Station To Station masterpiece, it was startling to find that Bowie, who often is not easily interpreted or using his music to reminisce or look back in such personal, on the surface style, would be so honest now and directly hearkening back to any past time in his life. Robert Fripp, Brian Eno and David Bowie recording at Hansa Studio in West Berlin 1977
For many Bowie fans including my own friends, “Where Are We Now?” made them cry upon listening and watching the video. Why? Perhaps because he had virtually dropped out of sight for almost a decade, aside from a few musical one-offs, so everyone thought he was retired or gravely ill with perhaps Alzheimer’s. 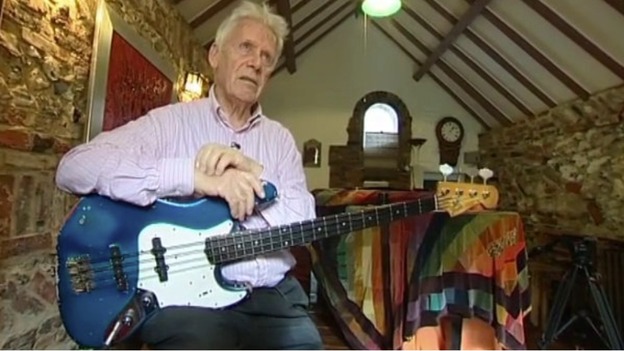 Herbie Flowers, the bassist who played on many earlier Bowie albums
Now his return presents a frail lilting song, that recalls what was already a painful period both in Bowie’s life and our own living under the Cold War. Bowie himself appears to be a sad survivor, much less glossy, and not at all the fashionable and well presented David Bowie, the rock star celebrity we are used to.
After a festival in Germany in 2004 Bowie had suffered heart problems due to a blocked artery and required angioplasty surgery—no surprise for a man who allegedly smoked 3 packs of cigarettes a day for how long? So his health issues had been in question, although one must also attribute his hiatus to having a new baby with wife Iman in 2002 and doubtlessly like say, Jay Pritchett who with his second wife Gloria are expecting their first baby on Modern Family, it was a new chance for Bowie to try being a better father than he was the first time around with Angie Bowie.
Now, having been able to digest the song and video for a few days, after falling in love with them instantly, I am better able to process everything. There have been a few interviews with longtime classic Bowie producer and confidant Tony Visconti, who has said he kept things so secret he could not even tell his own children he was working with Bowie, and the artist that designed The Next Day’s cover, Jonathan Barnbrook (who previously designed Bowie’s Heathen and Reality packages) who explained a little bit of the concept for using and subverting the photograph of Bowie’s original The Next Day. Still, even given the small amount of information that these two collaborators have given, I’m sure under the complete supervision of Bowie himself who remains silent about this project, more questions are raised than actually answered and the video has clues aplenty for fans to digest.

As the days go by Visconti has illuminated even more about this project, and of course, mysteries remain…

Tony Visconti claims the new album will be a rock album filled with classic Bowie arena-type songs as well as innovative songs that go into jazz-type sounds “with time signature Dave Brubeck would be proud of” and though he could not really understand why Bowie would release the most introverted quiet song on the album as his comeback single, he agreed that Bowie has his way of doing things on his terms.

David Bowie has never been a slouch when it comes to being savvy on every level. From songwriting to his public persona he has been sharply aware. Although he is human (although I questioned this at one time) and has at times contradicted himself—for instance he made no videos for Heathen after saying he was too old, then made them for his next album Reality, and now one for this new single. This time around, while Tony Visconti has been scratching his head wondering if David’s choice of the single was the right one, “Where Are We Now” debuted at #1 in many countries on the iTunes top singles chart and for a day or two knocked Taylor Swift off her perch. The song has also entered the regular U.K. singles chart at #6 making it his first Top Ten single in twenty years, since “Absolute Beginners.” Not bad for a quiet song about getting low in Berlin in the late Seventies.

Given that Bowie’s unveiled secret was this massively successful and made headlines for every major news service as well as every blog and minor news service around the world, one can only imagine the impact that will come when the next single and the new album come out in March, especially if it is as Visconti says “rock.”

As if I didn’t already, I can now appreciate that much more just how David Bowie, the artist who has seen the heights of commercial success, has also managed to subvert that success.

He has been able to attain the greatest possible artistic freedom of doing what he wants, when he wants and with a dichotomy that is intensely inward and profoundly outward. All this at a time when music and visual art are both at a peak of variation and distribution throughout the world, but it is a world filled with light-weight chart-toppers and run of the mill money grabs. Thank you for our gift Mr. Bowie, along with a healthy and a very Happy Birthday to you, sir!