Serge Gainsbourg is best known in the United States for his 1969 charting single, "Je t'aime...moi non plus."

The song, which features a breathy, sexually charged duet between Serge and his then wife, the British model/actress/singer Jane Birkin, against a backing of orchestrated pop, was all over A.M. radio throughout the late sixties and early seventies. 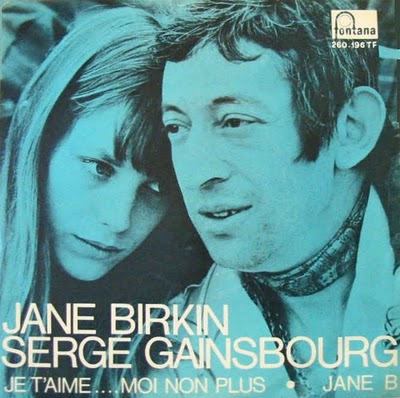 Due to its overtly sexual, albeit still somewhat surreal lyrics, and Jane's orgasmic moans, the song was banned over all Europe where it was deemed as going too far for a pop song.

Of course, this helped to take the song to number one in many of the same countries that refused to play it on the radio.

You'll still find the song played on some radio stations and used in films to this day.

Though this may have been Serge's pinnacle moment as far as hit singles go, it is so far from his complete story as to be a mere footnote to a career that has since elevated Serge Gainsbourg to that of France's most famous, infamous, scandalous, prolific, provocative and legendary cultural icon of the late 20th century. 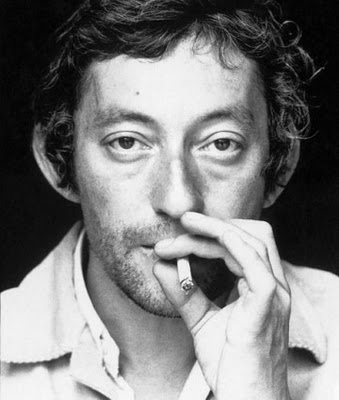 To say he is the country's equivalent to The Beatles, Elvis or Frank Sinatra, is no inflated comparison, and that stature only continues to grow, as does his worldwide influence on the last decade and a half's performers that have revered all things Serge. 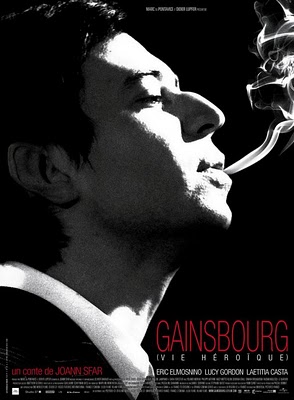 Numerous French documentaries have been made about Serge, some lengthy and exceptionally detailed. Now we can add a biopic entitled Gainsbourg (Vie héroïque).

The film was written and directed by Joann Sfar, the well known French comic book artist, who based it one of his graphic novels. Thankfully adapting it from a comic is probably one of the reasons the film is such a creative and refreshing take on the usual biographical film, not too mention some of the better animated credits I have seen in some time.

From Serge's earliest days as a middle class young boy of Russian Jewish heritage living in Paris, with the oncoming Nazi occupation and a father that forces classical piano upon his son, to his ultimate fame and headline escapades, the film manages to brilliantly play with chronological structure and give certain factual details about Gainsbourg's life a more fantastical spin.

While perhaps not showing exactly how an event might have happened, the director, allowing himself free reign in telling the story of Serge's extraordinary life, brings to the screen a greater feeling for Gainsbourg's difficult childhood, emerging genius, fragile shortcomings, and a shyness that I'd never really thought much of before, given his, at times, wild body of avant pop music and larger than life affairs with some of the most beautiful and famous women to ever step foot in France.

While all of the cast for this film are wonderful, it is really the two actors portraying Serge that illuminate the screen at all times. Kacey Mottet Klein as the young, precocious cigarette smoking pre Serge, Lucien Ginsburg, is outstanding, and every scene with him rewards tenfold. Kacey is an actor that should definitely be looked for in important future roles.

As the grown up Serge, Eric Elmosnino is almost frightening, not only for his superb acting, but also his identical looks. Some prosthetic makeup was used to complete Serge's inimitable face, but if you see the actor, there is already quite a similarity to begin with, so kudos for some really amazing casting on this one.

Gainsbourg (Vie héroïque) is such a clever film, including some very creative and sometimes startling elements (Serge's "Mug" for example) that anyone with a passing interest in the great music and fascinating life of Serge Gainsbourg will be enthralled by its magical storytelling and fantasy feel, though there are times when I would have liked a few more aspects revealed. Gainsbourg's partnership with producer/arranger Jean-Claude Vannier, who these days has become almost as equally renowned and influential due to his flamboyantly over the top arrangements for Serge, as well as his own magnificently out there solo works, would be one example of a missing piece. 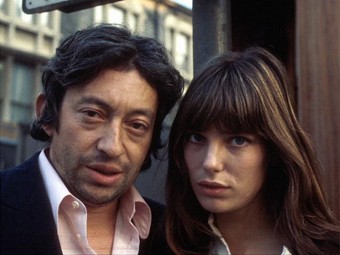 Still, when you have such a huge life as that of Serge Gainsbourg, a man that had affairs with, and subsequently wrote songs for the likes of Brigitte Bardot, Juliette Gréco, and Jane Birkin among others, incessantly lived on Gitanes and liquor, set fire to a French banknote during a public appearance, recorded reggae and dub with Rastafarians in Jamaica (including a reggae version of the French National anthem, "La Marseillaise" that didn't sit too well with many patriots) and made an overtly inappropriate sexual comment to Whitney Houston, on a live French television talk show, there's bound to be something left out. 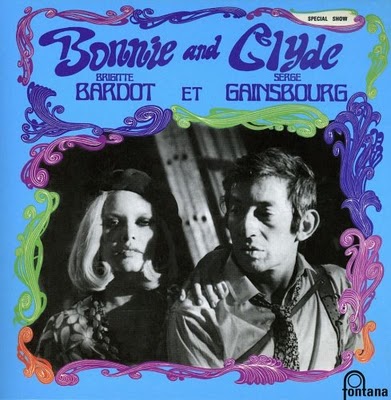 Serge Gainsbourg composed some of the most influential and absolutely stunning music to ever come out of the French Chanson and pop traditions, his lyrical wordplay uses puns and double entendre that has never been matched in music, so you can't expect it all to be shoehorned into a feature film.

If you are unfamiliar with Serge's music, then first pick up one of his many greatest hits compilations and if possible an English translated biography before seeing this film, otherwise you may have your head spinning.

If you're already a Serge Gainsbourg fan, then this film is funny, enlightening, entertaining, bittersweet, and essential viewing.