JIRO DREAMS OF SUSHI : I DREAM OF JIRO

JIRO DREAMS OF SUSHI : I DREAM OF JIRO

This piece was originally published May 21st, 2012.

In the last 25 years Japanese cuisine has become as easily obtainable as a trip  to your local supermarket or a quick walk down the block to a nearby Japanese restaurant.

However, with the rapid influx of this delicacy, what quality are we getting?

What standard is upheld within the industry?

And just how dedicated to sushi is the person making it to sell in the prepared food section of your nearby mega chain supermarket?

Sushi, one of the mainstay items almost always offered at a Japanese restaurant, by its simplest definitions is cooked vinegared rice (shari) and whatever the rice is combined with (neta). Added to that can be the condiments such as wasabi, soy, ginger etc. The neta can be cooked egg or other things, but is most often raw fish that has been carefully selected and sliced, then presented with the rice by a highly trained and skilled chef who knows how to prepare it so as to avoid any illness that can be had by eating the raw fish.

There are many variations of sushi, such as the common ones here in the US: the rolled sushi which is called makizushi, and the nigirizushi which is the classic small mound of rice shaped by a chef's hand with the slice of fish placed atop the rice. So sushi always has the rice, while sashimi, also often served in a Japanese restaurant, would be the slices of raw fish alone, either on a dish or over a bowl of rice.

Here at Mystery Box H.Q. all of the above, sushi, sashimi, etc. (along with the many other variations and other dishes that are usually served in a Japanese restaurant like miso soup, actual ramen noodle soup, oyakodon, and tempera, just to name a small few) are among our all time favorite culinary delights.

So it was with a much anticipated long time wait we were finally able to experience the documentary Jiro Dreams Of Sushi (2011) by director David Gelb. 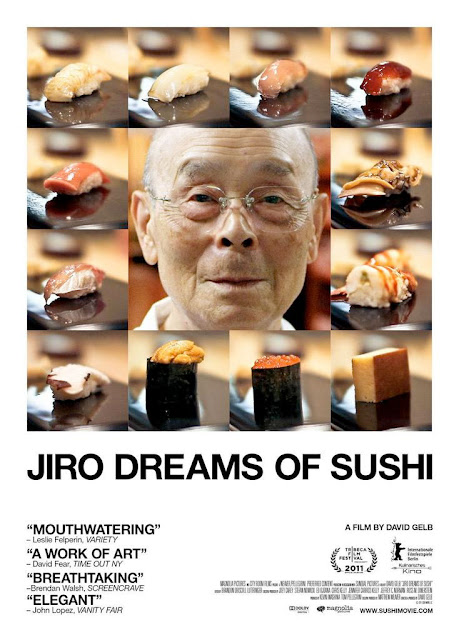 Jiro is considered the greatest living sushi chef in the world, and in fact perhaps in sushi's history.


As the documentary points out, from his earliest childhood spent living on his own, Jiro, now 86, has worked at creating sushi perfection with little else in his life to distract him from that goal. Jiro has always dreamed of making sushi, has always focused on making sushi, and better sushi. As we encounter within this film, his dedication is everything and he has taught his skills to his two sons and his restaurant's team of apprentices and employees but can his obsessive expertise be handed down?

Jiro's restaurant is called Sukiyabashi Jiro and is a tiny restaurant located in the basement of a Tokyo subway station. There are only ten seats and reservations need to be made one month in advance, but often a year in advance is necessary, plus should you forget to confirm your reservation the day before, you lose it. 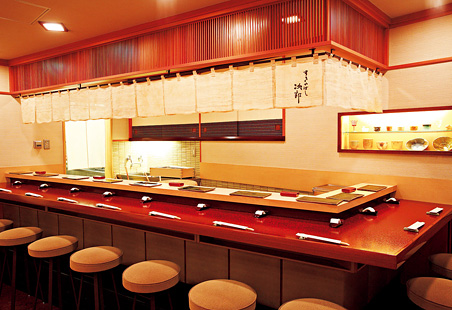 The film takes us on a loving journey through Jiro's obsession with sushi through interviews with Jiro, his sons and staff, and the food critics that proclaim him the finest sushi chef in the world.

With each segment of the film we learn more about Jiro and understand that his is a life of singular practice, always striving for a perfection that he feels he has yet to achieve, and not letting anything else derail that focus. To imagine the sacrifice that this would entail with any occupation is beyond most of us, but here we learn that he loves his job, lives his job and as mentioned, dreams of his job and little else. 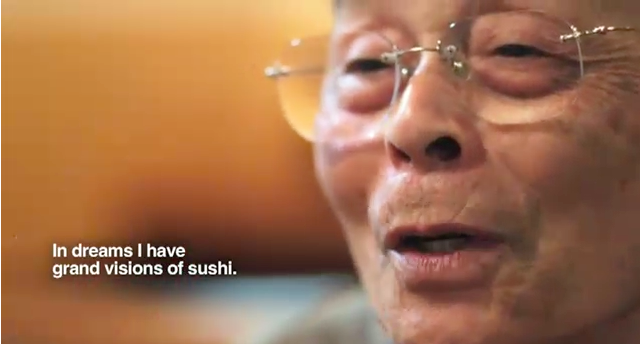 We get to know Jiro's two sons, Takashi, the younger son who trained until he felt ready to open his own restaurant (and so he could escape the pressure of working under his famous dad), and the elder son, Yoshikazu, who will be expected to take over for Jiro one day, despite what might be overwhelming odds that the reputation of his father will not allow him to flourish with the same ultimate greatness in the eye of customers and food critics.

One of which is the famous Michelin Guide.

The world's foremost and historical guide for culinary dining reviews, the French Michelin Guide, has awarded Jiro's restaurant three stars, which is their ultimate and highest rating. This means the restaurant is of "exceptional cuisine, worthy of a special visit." Should a restaurant be awarded three stars, it basically says that it would be worth it to hop on a plane, and visit a country solely to dine at that three star restaurant, then get back on the plane and leave.

At a cost of 30,000 Japanese Yen or around $380 not including sake or tea and taxes, it is not unheard of that many of his customers are of the well-heeled variety that would venture to his restaurant because of this type of review. 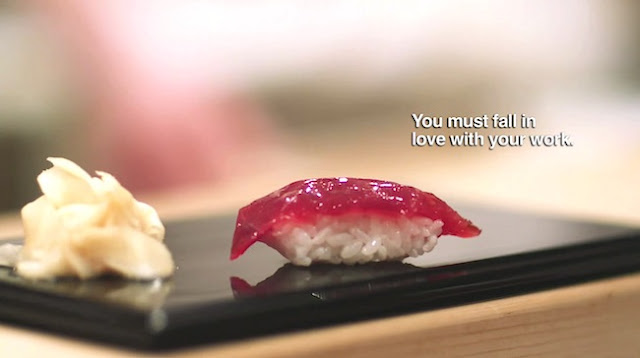 For a documentary that only runs at around 80 minutes, there is so much wonderful insight to be digested and absorbed.

We watch as Jiro lectures his son, hands down critiques to any fledgling new trainees, and teaches his staff how to do everything from cooking rice and eggs perfectly to hand massaging an octopus for the ultimate in tenderizing. I do wonder if there seemed to almost be a bias against Yoshikazu succeeding by the director Gelb guiding the viewer towards that impression, but I also imagine that the time spent with him making the film might have allowed Gelb more awareness of where Yoshikazu is coming from.

Perhaps this footage did not make it to the final cut.

Then again, there are few humans with the absolute obsession and single-minded approach to something that his father has, so something as small as learning that Yoshikazu has a love of fast cars, is probably enough of a clue to show that he might not ever be at the same exulted level as that of Jiro—who is? 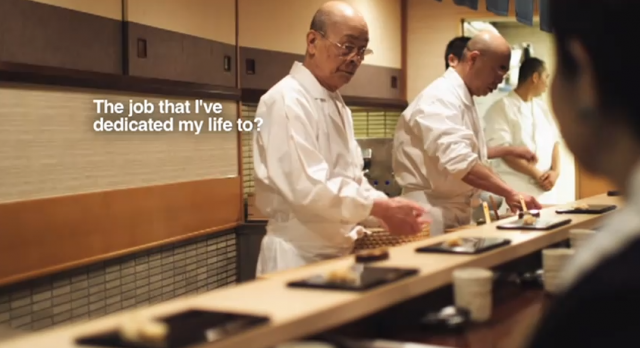 Jiro creates his daily menu depending on his supply of fresh fish available, and we learn through interviews with his many charming purveyors of supplies, how they too are experts that Jiro has built reputations with, and how this is also a key to Jiro's success.

Jiro is now handing over certain duties dealing with them to his eldest son, and as Jiro explains, the spotlight is on him and his presentation of sushi to his customers, yet they do not know that most everything is now created from the hands of his staff. 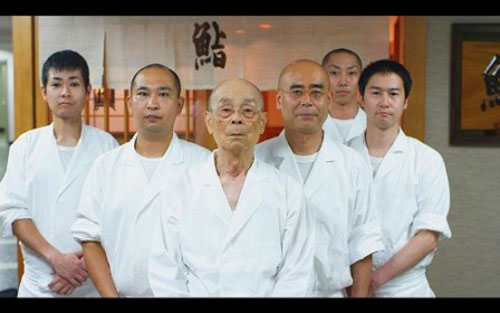 Jiro is the star, and few, aside from those of us watching the film, get to know the lighting crew, sound-man and roadies who put the show together from behind the stage curtain.

The film allows the viewer a glimpse into the behind the scenes of Jiro's famous establishment, the food critics that prop up this fame, and the Japanese fishing industry that is so vital to the overall product.

Jiro as the main subject is both incredibly intimidating to all around him, including his customers, and yet he has a knowing wink and a sense of humor that belies his serious demeanor, helping him to maintain his reputation and relationships. 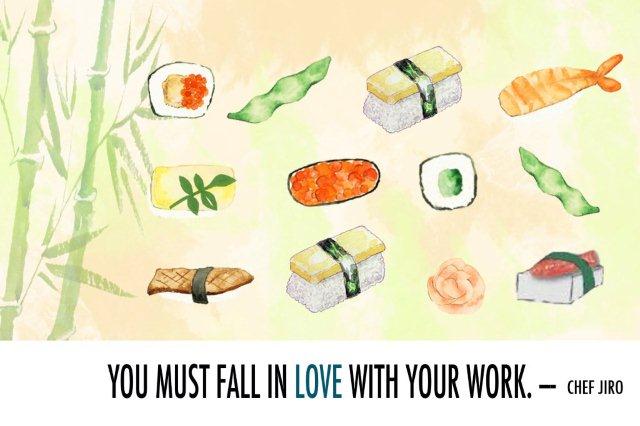 Jiro Dreams Of Sushi is one of the finer documentaries on cooking and the creation of food as art.

It is ultimately a fascinating look at striving for greatness regardless of the subject. You could imagine a renowned athlete, painter or an inventor from history as the subject as well, but in this case, it is a detailed look at Jiro Ono, a man of standards and direction, who loves what he does, and what he does is create his world-class sushi.