A Christmas Gift for You From Robert Jaz

A Christmas Gift for You From Robert Jaz 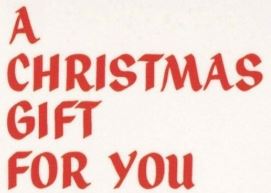 OK the title for this week's Mystery Box column may be a bit misleading.

The gift is actually one that was given to the world in 1963 by the very famous and legendary (as well as infamous and notorious) enfant terrible, Harvey Philip "Phil" Spector.

Phil Spector, a man who many (myself included) feel may be one of popular music's all time greatest producers, has recently more or less capped, and in a sad note, what was a brilliant and careening career of outstanding merit.

In light of the tragedies involving the world of Phil Spector that have been in the news recently, I felt that perhaps mentioning Phil in this week's title might be a bit too tabloid-like or off putting for what should be a cheerful time of the year. Basically, I wanted this to be a separation of the Phil I admire and the Phil I shake my head at.

So with my title, I try and go for the humorous and comforting angle, or perhaps this ends up as just a sly way of hooking in another reader?

Whatever the case you are still reading dear friends, and I thank you for that.


A Christmas Gift For You From Phil Spector 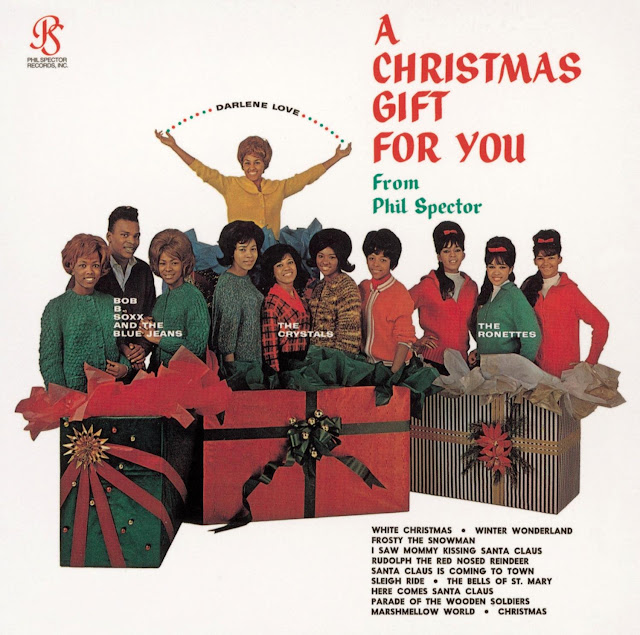 I am writing about what I consider to be the greatest holiday album of all time. A bold statement considering all the other greats that have been made and are on my list of faves: The crooners such as Sinatra, Dean Martin, Bing Crosby (with David Bowie) and Burl Ives; the left field classics by James Brown, Ze Records and Tiny Tim; the rock and roll masterpieces by Chuck Berry, The Beach Boys, The Kinks, Elvis, Los Straitjackets and El Vez; and great artists masquerading as other groups so they could release a few splendid holiday tunes, Sun Ra as The Qualities, and XTC as The Three Wise Men.

A Gift For You... is an album that you should immediately rush out and purchase by all means necessary. It is a gem that actually can be enjoyed by any and all—whether your celebrations this time of year be sacred or secular—at any time of the year it works, because it is just so freakin' good. In fact, you may even find yourself playing it in the middle of spring at a picnic, or a party on the Fourth of July.

With this album Phil Spector continued to use his musical trademark that had served him so very well on the airwaves, that of his Wall Of Sound. 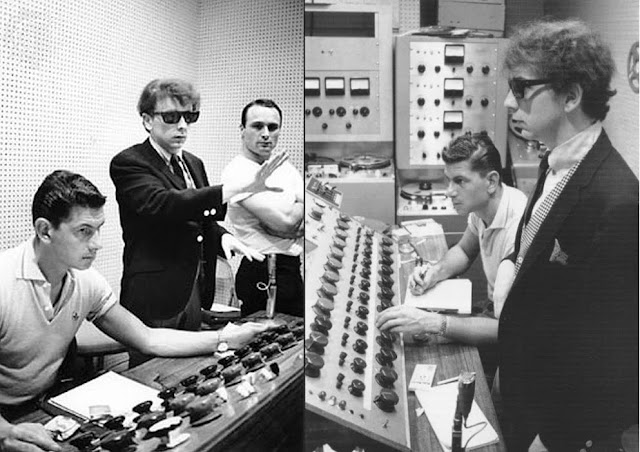 Utilizing this production technique, which he pioneered, it involved mono recordings made with large "pop" orchestras and numerous session musicians who played parts, usually over and over, that were overdubbed layer upon layer and treated with large echo chamber reverberation. The dense effect was magical and magnificent. Clouds of hazy gauze instrumentation swirling, distinctively unique almost tribal-like drumming, loads of groovy percussion such as Phil's inimitable sleigh-bells and funky castanets, and vocal parts that could melt even the coldest heart. 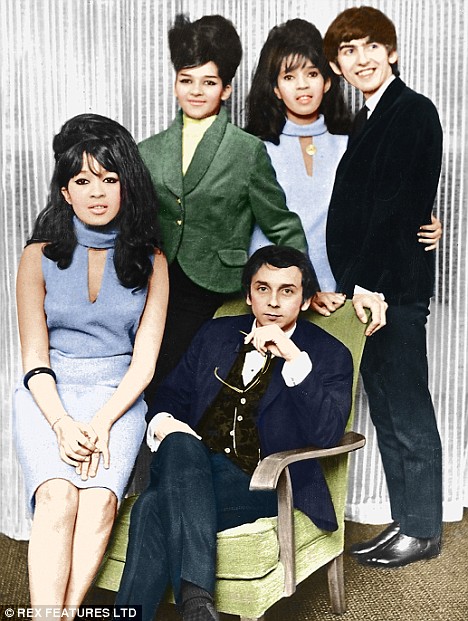 From around 1960 to 1965 Spector stacked up 25 top 40 hits, and this sound, which includes his '60s "Girl Group" work, his Phillies Records label, and onto his later '70s classic rock productions for George Harrison, Ike and Tina Turner and The Ramones, has gone on to influence endless performers. From the Beach Boys and The Velvet Underground, to The Jesus and Mary Chain and The Raveonettes, all have acknowledged Spector's Wall as a template. This body of work continues to stand today as some of the most distinctively original and identifiable the world of pop music has ever heard.

For A Christmas Gift To You, Spector continued to utilize what would later become known as The Wrecking Crew — Made up of some of LA's greatest session musicians.

Spector's timing for the initial release, originally called A Christmas Gift For You From Philles Records, was however, not the greatest as it unfortunately coincided with the Nation's biggest single downer of the early '60s. The album came out on November 22nd, 1963 which happened to be the day of President Kennedy's assassination. Not really looking for any type of good cheer that holiday season by the buying public, the record ended up a failure in sales and recognition (it still peaked at #13 in Billboard's album charts, so actually nothing to sneeze at but not the smash Spector had hoped for). 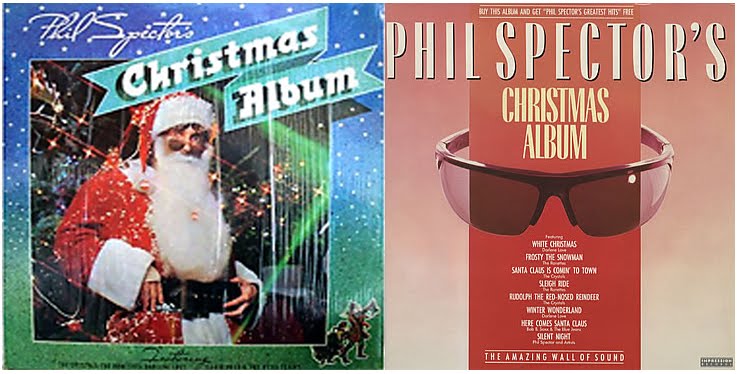 Re Released in 1972 on The Beatles' Apple Record, the lp was now called simply Phil Spector's Christmas Album.It was a hit and peaked at #6. Subsequently the record has gone out of print and seen many reissues with various covers over the years often charting again and again. It appeared in full on the Spector compilation box set, Back To Mono. 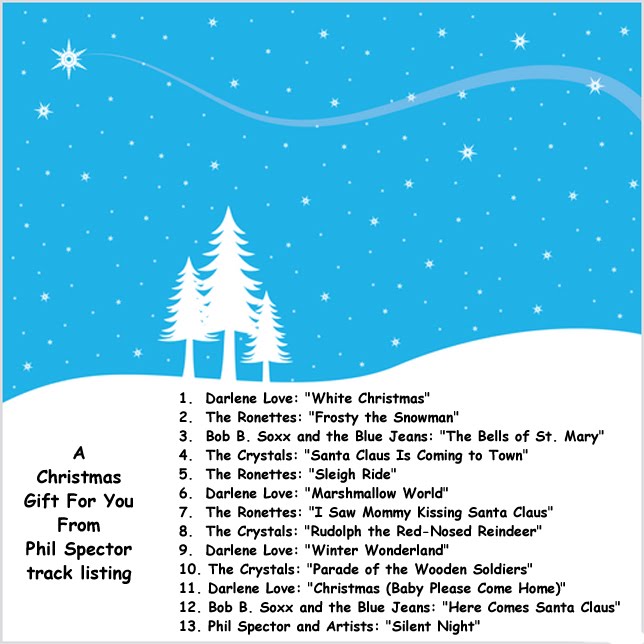 Iconic, exuberant and without traces of maudlin or mawkish sentimentality pit that holiday music can often tumble into, this record rushes through a speedy pace of charm, fun in the snow and good vibes far all. 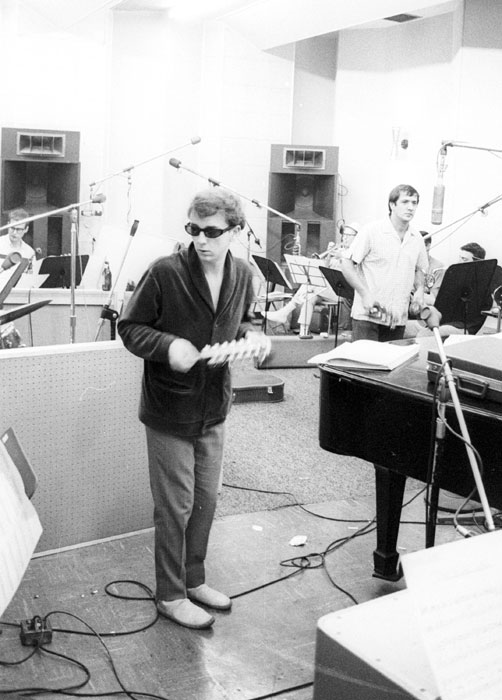 Of course, the songs are filled with the usual Spector delights, all drenched in his fabulous reverb, and including what becomes a key Spector percussive element, the ever present sleigh bells. If there was one instrument that Phil had to throw in the mix for his earlier work, during the recording of this album and later on for the many projects to come, it is those wonderful sleigh bells. Brian Wilson must had these sleighbells swimming in his head on a non-stop loop because they also greatly informed some of his best work such as Pet Sounds. Notably, Wilson has always called "A Gift For You..." his favorite album of all time. 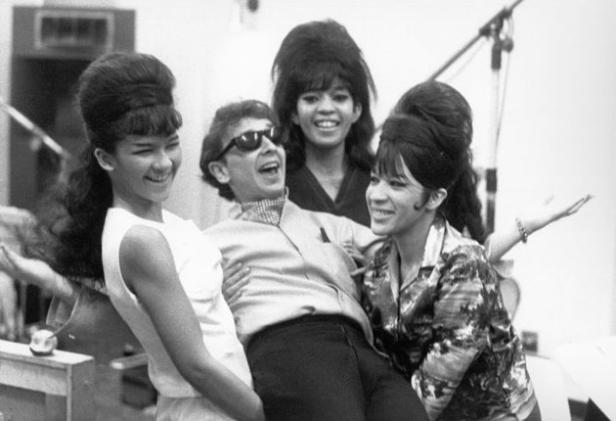 Spector's main stable of artists from this time period are the performers for Gift... and have by now also often been so associated with certain tracks (Darlene Love and "Christmas (Baby Please Come Home)" and Ronnie Spector "Sleigh Ride" for example) to the point where these performers still plan their tours around every holiday season so they can fit these songs into their set lists.

Rolling Stone has called the album one of the Top 500 made. If you have ever even turned on a pop music station during the holiday season there is a 99% chance you have heard a track or three from this album. U2 faithfully covered Darlene Love's "Christmas (Baby Please Come Home)" and Bruce Springsteen's ever present "Santa Claus is Coming to Town" is based on The Crystals' version from this album.

So not only popular, thoughtful, masterful and thoroughly entertaining fun, this album manages to transcend its maker's troubles and also help anyone of us to get through the troubles or stress during a holiday season.

A Christmas Gift For You From Phil Spector has been recently reissued in spectacular form by Sony's Legacy Recordings label. The release includes a great booklet with photos documenting the recordings and artists.