WHY I MISS A GOOD LAUGH TRACK...

WHY I MISS A GOOD LAUGH TRACK…

The use of laugh tracks for television comedy has been the subject of derision since the early 1950's.

So believe me folks, if you are not a fan when you run across a sitcom or animated series that has a laugh track, it's not an original feeling you have there.

I however, not only appreciate a good laugh track and miss its proliferation these days (I'll explain this later). I also am aware of the origin of it and how its fascinating history of this now considered unhip attribute of television, actually connects to The Beatles' "Strawberry Fields Forever," psychedelic music, The Moody Bluesand King Crimson—in other words, here's a history lesson for you young hipsters.

The laugh track came into being during the early days of television because there was a problem.

During radio's golden era many programs were broadcast in front of a live audience. Televised sitcoms however, were shot like movies, using a single camera and different takes from various angles that would then edited together later, instead of the multi-camera format. 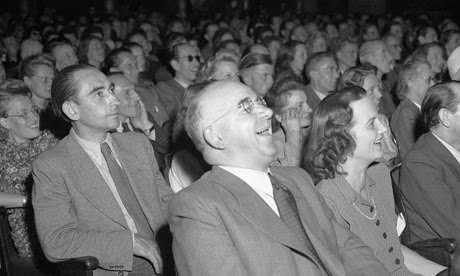 Of course many shows were also live television which like the previous radio programs, still allowed for live audiences and their laughter. Television studios tried to simply edit some laughter onto a final cut, but the effect was ill timed awkwardness and an unnatural feeling.

Enter CBS sound engineering genius Charles Douglass, who was bothered by the "God-awful" responses of the primitive laugh tracks and set about to come up with his own invention for laugh-making.

Douglass came up with a device which he named "The Laff Box."


This mysterious black box set-up contained a set of keys that when each key was depressed, played a loop of Magnetophon magnetic recording tape. These loops contained hours of live audiences (from the live broadcast comedy and variety shows) that Douglass had recorded so he had a wide palette of laughs, guffaws, chuckles and cheers to pick from as he played his organ/typewriter like instrument.


Douglass began to work at perfecting his invention and in 1950 The Hank McCune Show became the first to have his laugh track added to the soundtrack.

An avant-garde exception to the previously mentioned single camera sitcom show was the great I Love Lucy, where Lucille Ball and Desi Arnaz invented the multi-camera shoot in front of a live audience sans artificial laugh track.

This format did not take off as one would have thought with the preferred format snowballing into throughout the '60s being the single camera sitcom shoot utilizing Douglass' Laff Box.

As one could imagine with such an in demand cash cow, Douglass usually carted his box around to studios in secret and under lock and key, where he could then work his device without ever showing anyone his mystery invention. He later quieted away and made his seamless laugh edits.

Even with the multi-camera format shows, Douglass was often hired on to "sweeten" an audience's live responses (this was and still is lied about being ever used by T.V. producers to this day), enhancing, correcting and in the case of going to a commercial, making segues between the real audience sounds and his pre-recorded versions.


An effective and detailed laugh track became an art form in the hands of Douglass and subsequently it became the norm as it not only signaled that you were watching a comedy, even if it was an animated one such as The Flintstones, it also guided the viewer as to when something was meant to be laughed at. Ah, the beautiful wonder that is a well-timed dose of "canned laughter" is something I am sure William Asher often repeated in his head.

Throughout this era, Charles Douglass had cornered the business on "laffs" and was called on countless times to add his expertise, or as it was said he became "...the only laugh game in town."


Since it was always a controversial invention from the start and under immense criticism, the times changed, it was now the '70s and for some forward thinking show creators they had a yearning for inducing more topical elements, realism and a back to Mother Nature quality for their shows.

The Mary Tyler Moore Show debuted in 1970 and with it the return of the multi-camera live audience sit-com.

Next, in 1971 the mega hit All In The Family solidified a trend throughout the '70s that became a standard for television, with most shows announcing at their start "Taped in front of a live audience." 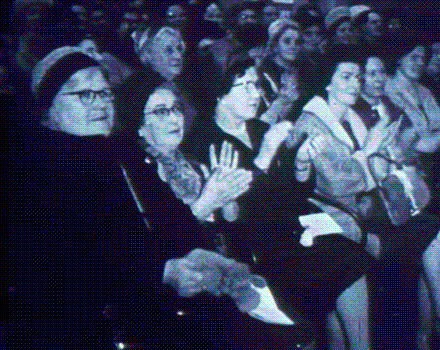 In the U.K. television often used a real audience with outdoor scenes screened before a live audience to capture the laughs as they happened. Brilliantly as always, Monty Python's Flying Circus played with this when they loved cutting in black and white stock footage of an audience of applauding elderly women after certain scenes and segments.

In the case of M*A*S*H, creator Larry Gilbert refused to add a laugh track to his new single camera comedy. He then reached a compromise with producers to not have a laugh track at all during the operation sequences only.

This later became a style with shows like Eight Is Enough that loved mixing comedy and drama together in one big dramedy stew.


With Dream On and more importantly, The Larry Sanders Show, cable station HBO began to air first camera sitcoms (which made a come-back in the early '90s and are still with us today) without any laughing at all. So no live audience and no artificial laugh track at all. Just plain old silence after a joke and many an awkward pause providing the mirth.

This has really taken off now in network T.V. with Malcolm In The Middle, The Office and now most famously, the huge hit series Modern Family.

Modern Family works and works well since it is in actuality a spoof of and styled a bit after the famed P.B.S. mini series An American Family, which showcased the dysfunctional Loud Family.Also an influence would be Rob Reiner's incredible 1984 film Spinal Tap which kicked off the mockumentary style of filmmaking that was later perfected in the films of Spinal Tap actor Christopher Guest.

So who needs a laugh track anymore?

I do and for a few reasons.

A well placed laugh track adds another element to a show; an element that can be manipulated and played with, and if used with thought, can have that artistry so imbued in the work of Charles Douglass. Sometimes I listen closely to laugh tracks and love picking out individual laughs. There are times I hate the show and love the laugh track. Sometimes they are simply pure nostalgia for me, recalling beloved shows from television's golden age. A well-timed laugh track can align with perfect bliss.

Personally, I love Modern Family and it easily is stands among Seinfeld as something that will always be considered a classic sit-com. I think that for this particular show, it makes sense to not use a laugh track and take the awkward pause, as perfected by the actors on the show, to a new creative high for television.

However, as the popularity of a show like Modern Family increases so too will comedies without laugh tracks or live audience responses, and that worries me, as networks jump on board and come up with more lackluster, uncreative dumbed down copycats.

What I love most about a laugh track, is knowing the history of them and that Douglass is behind this history, and subsequently is there among the forefathers of sampling.

While his baby has become as outdated and little loved as a dial telephone connected to the wall by a cord, a black and white television set or a checkbook, it could be that somewhere lurks an unhipster visionary devising a fantastic new show that incorporates the outdated and forgotten. Did someone say the vinyl LP is dead and buried?

So what exactly does "Strawberry Fields" or The Moody Blues or King Crimson have to do with laugh tracks? 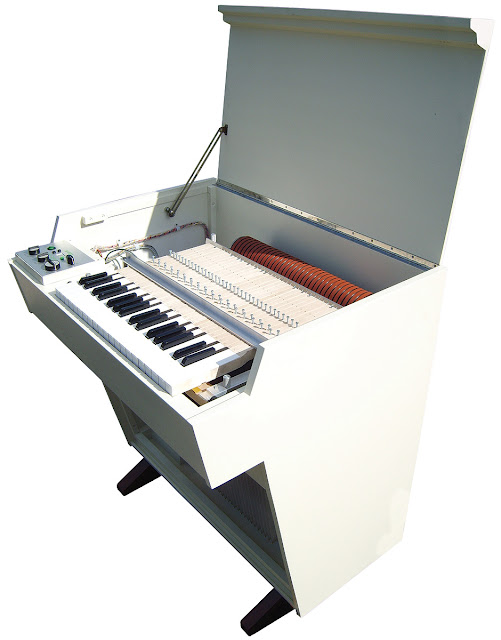 The song, and these bands, as well as other psych and prog rock bands of the past, featured the glorious Mellotron.

The Mellotron, like the earlier Chamberlin, was a mechanical gem of an instrument that contained prerecorded sounds on tape loops, either orchestral instruments or special effects, that were triggered and played via its organ-like keyboard.

This keyboard based musical instrument has found a huge resurgence of interest, has become the subject of a documentary film, Mellodrama: the Mellotron Movie, and has resurfaced in some current recordings by artists craving the Mellotron's inimitable and unique sound.

The Mellotron and The Chamberlin were also basically reworked versions of the original Charles Douglass' "Laff Box."