The Mystery Box: MY FAVORITE CARS OF TELEVISION

MY FAVORITE CARS OF TELEVISION

It's fun, although highly subjective, but you can usually come away with learning something ne to add to your pop culture brain-file.

So dear readers, here then is a compiled list of my favorite cars from television. At first I was going to include films and also animated television shows, and have them all mixed up, but decided not to, as those can be part of future lists.

I'm sure that you will have your own favorite vehicles that did not make my list.

Others may drool over Magnum P.I.'s Ferrari 308 GTS—and for good reason, as that is a mighty sweet car indeed!

Yes, there will be plenty of vehicles that people like but I just find boring.

Here at The Mystery Box H.Q. I have a particular fondness for vintage hot rods and antique sports cars. Plus, I can never get enough of the unusual one-of-a-kind rides and weird hybrids that were prevalent on sixties and seventies TV shows. If you feel I left one of your faves out, then by all means let me know about it.

In no particular order, except for the very last car, here they are!

For two seasons (1968-1970) our heroes, Fleegle, Bingo, Drooper and Snorky (or "Snork" as he was called in the theme song) zipped around on these customized six-wheel Amphicat all-terrain vehicles (so not really beachy dune buggies). Each was designed for the character who drove it.

As the mayhem and adventures ensued, so too did my wish to hop on one of these babies so that I might drive by, shaking fist in the air, past the dreaded Sour Grape Bunch. 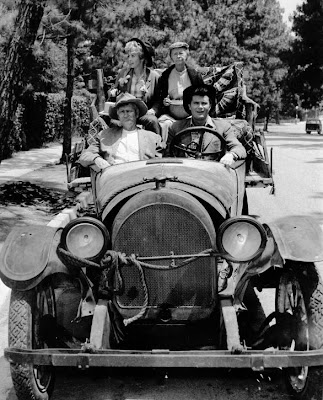 Ah, the wonders that were 9 full seasons of The Clampetts!

As remarkable as the longevity of the show's run, is also what the clan drove to Beverly Hills in the first place. Originally a 1941 Model 46 Roadster, customized cars legend George Barris took a touring car body and married it to a flatbed truck frame. He added Granny's rocking chair and some moonshine to the back and made history. The truck varied over different episodes (and five different vehicles were actually used for the series) as needed for a particular story line.


In one memorable episode cousin Jethro Bodine turns himself into a "double naught spy" and adds an ejector seat to the vehicle. In a rare moment when Granny is sitting in the front passenger seat, she pulls what she thinks is an "assist handle" and ends up ejected into a tree.

For another episode Jethro soups up the "not with it" truck into a flashy hot rod nicknamed Granny's Haulin' Rod. 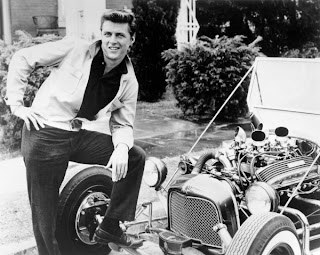 Credited with defining Hot Rod culture in the late '50s/early '60s, Ed Byrnes' character, the hipster Gerald Lloyd "Kookie" Kookson III often stole the spotlight away from the stars of the show and became a huge star. 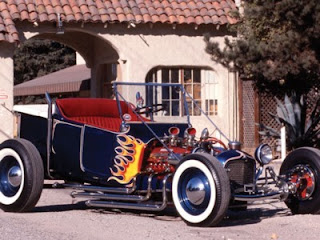 With his slang, his windbreaker and constant hair combing, as a valet who worked at Dean Martin's Dino's Lodgerestaurant next door to the 77 Sunset Strip private detective agency, Kookie drove a souped up 1923 Ford Model T better known as a T Bucket. Flames on a car would forever become synonymous with cool. 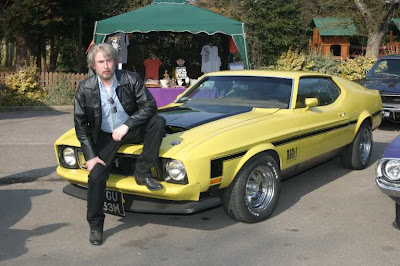 When he's not attending anger management classes, Steve Coogan's character, the macho ex-roadie Tommy Saxondale, is highly devoted to his beloved car. Yet unfortunately, he must sustain even further indignities by mostly driving a far less glamorous Renault Kangoo to work as a pest controller. 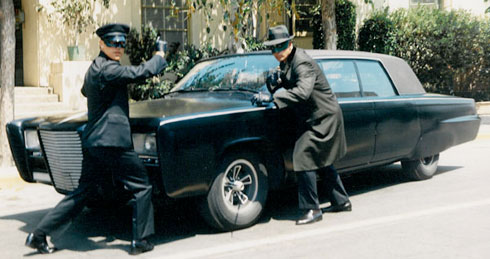 From 1966-1967, the same folks that brought Batman to success on television, decided to once again (after several failed attempts in years past) give The Green Hornet his own similar styled show. Instead of the campy quality that Adam West and his Batman reveled in, The Green Hornet played it straight. Van Williams, as media mogul/playboy Britt Reid was lucky enough to have as his personal driver/partner Kato, be played by the legendary Bruce Lee, making his television debut.

For many kids, it was their first time seeing martial arts used on an action show. Show producer William Dozier was unhappy with what George Barris came up with for his version of The Black Beauty, so he hired the othercustomized cars legend, Dean Jeffries, who took a 1966 Chrysler Crown Imperial and turned it into a classic. Loaded with an arsenal of weaponry and gadgets that included Infra-green Headlights, Front and Rear Rockets, a Mortar, a front grill Gas Gun, and of course the requisite Smoke-screen. You cannot get any cooler than a car with a mortar being driven by Bruce Lee. 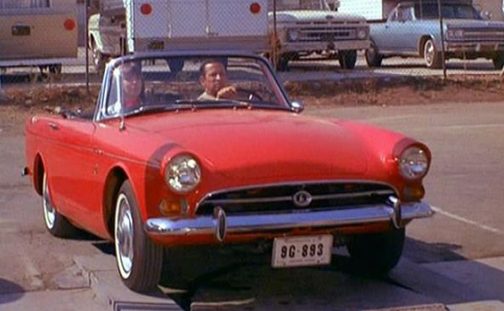 On Mel Brooks/Buck Henry spy spoof Get Smart that ran for 5 seasons, Agent 86, as played by Don Adams, primarily drove around town in a red 1965 Sunbeam Tiger that had been customized by Gene Winfield.

A machine gun, ejection seat and of course, Barbara Feldon as Agent 99 in the passenger seat, were a few of the special additions made to this a very special TV car. 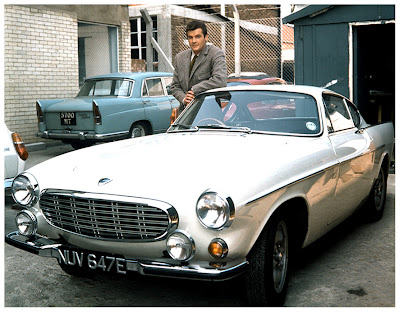 Roger Moore has always been cool as far as I'm concerned.

Not only did I really enjoy his work as 007, but he was making great television shows and driving groovy cars long before the Bond films. His version of the The Saint, is an absolute standout. Simon Templar drove this formidable Volvo P1800. 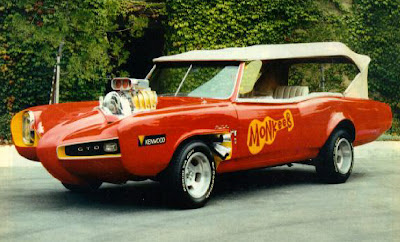 Once again, car designer Dean Jeffries made television pop culture history when he was enlisted in 1966 to come up with something for a new show featuring a four wacky guys in a musical group. He took an already wild Pontiac GTO and turned it into The Monkeemobile. 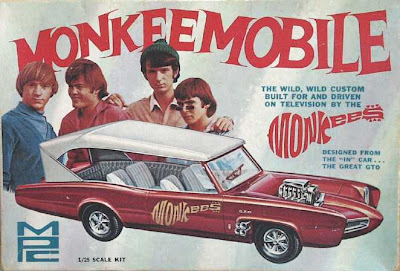 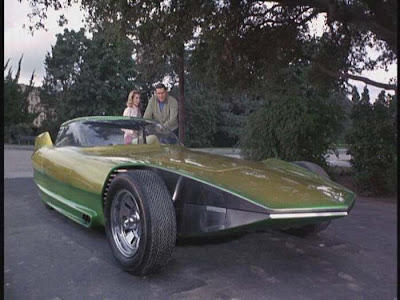 For this particular episode of Bewitched, Darrin yearns for a flashy prototype sports car (created for the show by Gene Winfield) which he sees in a car enthusiast magazine.

In a super rare attempt to be friends with "Derwood" I mean Darrin, his mother-in-law, Endora, gives him the car as a gift. Unbeknownst to all, the actual car, called The Reactor Mach II, was zapped from the engineers guarding it in Detroit.

The same car also turned up in episodes of Batman, with big ears and a tail as Catwoman's Kitty Car, in an episode of classic Star Trek, and on the show The Flying Nun. 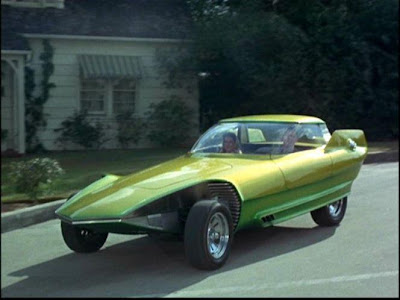 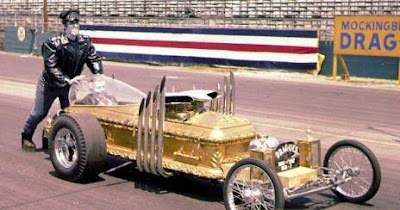 Grandpa Munster was always adept at tinkering with things, and so, in order to once again bail out Herman, he had to invent something. Herman had lost the family car, The Munster Koach (see entry below) in a drag race for the episode Hot Rod Herman.

Grandpa had no problem coming up with this Gothic dream. Built by Tom Daniel who was working for George Barris at the time, an actual fiberglass coffin, bought out of the back door of a funeral home was used for the body. Immortalized in music by Rob Zombie. 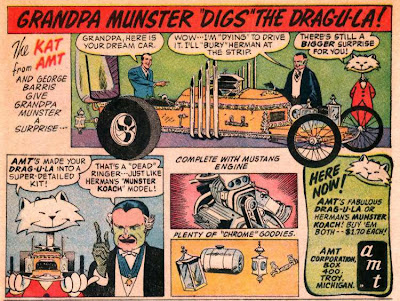 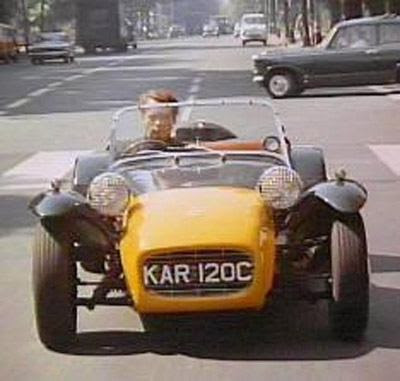 Bearing the famous registration plate KAR 120C, Patrick McGoohan's Prisoner character's choice of car, the Lotus 7, was nicely suited to the character Number Six's ideas of freedom, and since the car was also available for real in kit form,

The Prisoner's claim that he built the car with his own hands, also fit right in. A tasty sports car that was both highly original and highly unusual, it perfectly suited McGoohan, who created one of the greatest, and most original of all television shows that have ever appeared on television. 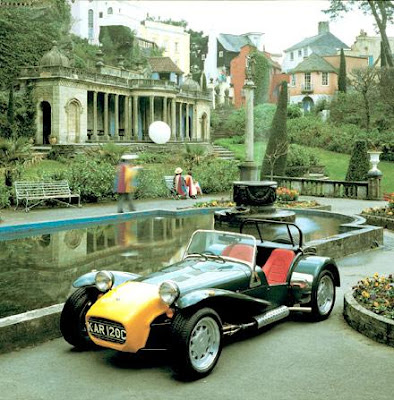 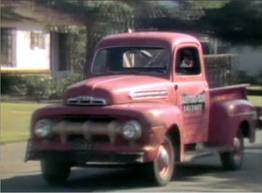 For one of my all time favorite sit-coms, two red pick up trucks were used: A 1951 Ford Pickup, and a 1947 Mercury M-47 Pickup. The Ford, in all its faded glory is the most famous and most remembered.

There are few joys in all of television history as wonderful as seeing Lamont Sanford drive up in the truck while the Sanford and Son theme song, Quincy Jones' "The Streetbeater" welcomes you into the world of Lamont and his father, the King of Junk, Fred Sanford. 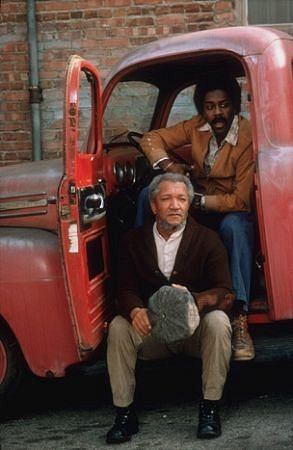 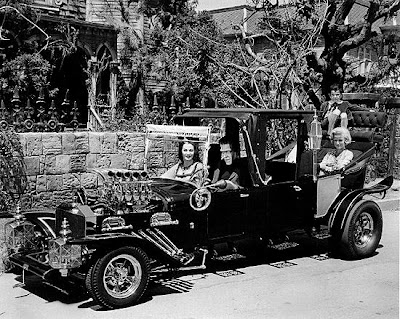 For The Munsters, Herman Munster's family car was contracted to George Barris, who then had his stable of car customizers come up with The Munster Koach.

His employee, Tom Daniel designed it and was paid $200.00 for his genius. The car is a concoction using 3 Model T bodies, a handmade frame, radiator and fenders, with a blood red interior and a gloss black custom hearse body. 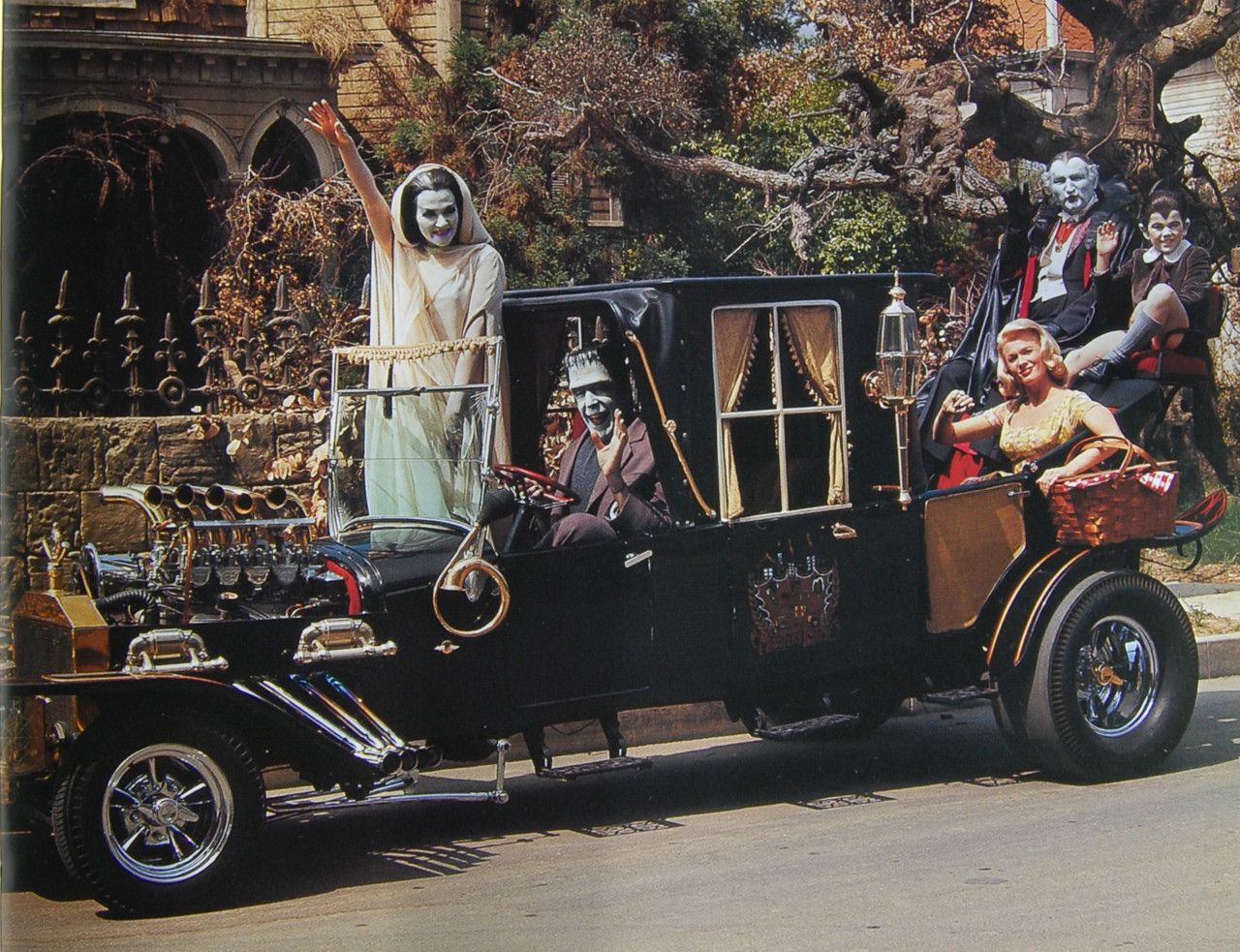 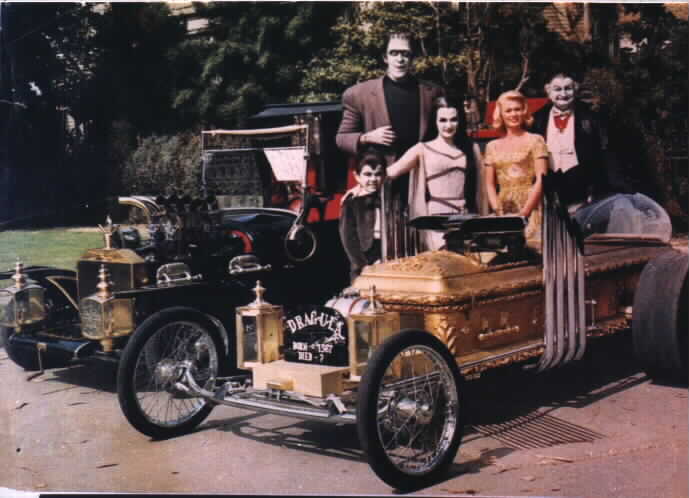 Meanwhile, across town The Addams Family had a car that was rarely seen in episodes —a beautiful 1931 Packard V-12. 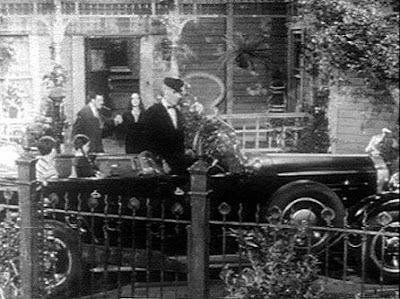 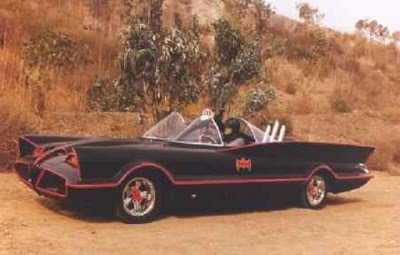 I love vintage guitars, vintage shortwave radios, and well, I guess many, many things that fall under the classification of "vintage", especially vintage cars. Seems 1966 was a very good year for cars!

There are few artists in automobile design history that I do not worship as much as the great George Barris, the King of Kustomized Kar Kulture, and his Barris Kustom Industries is the stuff of legend. So of course his fantastic Batmobile, which was used in the Adam West Batman TV series that ran from 1966 to 1968, has to be among my own personal favorites ever. 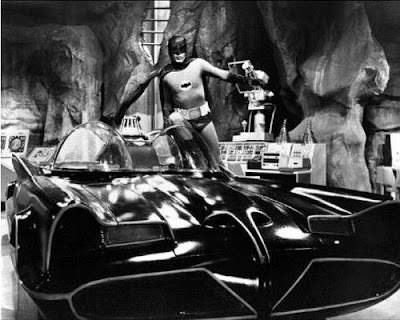 You can keep taking things darker and darker with the Batman franchise, but I still prefer the "Krunch", "Glurp" and "Kapow!" that was the trademark of the most colorful and witty Andy Warhol/Pop Art Movement/James Bond craze inspired Silver Age version that was the 1966 Batman.

In 1955 Ford Motors had a hand-built Italian made prototype for a car they would call The Ford Futura. At a cost of over $250,000, the car never made it to production and when in 1965 the producers for a new Batman show contacted George Barris and told him they needed him to come up with a Batmobile fast, his Barris Kustom City company managed to buy the Futura off Ford for $1. 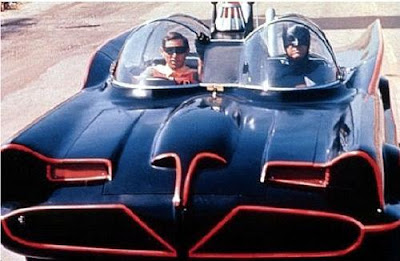 He envisioned this Futura to be the perfect vehicle to match the Batman's needs, and after some splendid Kustomizing, came up with masterpiece. for the record George Barris came up with quite a few other masterpieces of Kustomized cars.

Say what you will about any Batmobile that has come since, this is still my fave, and I wish I still had that original Corgi toy version from my youth... 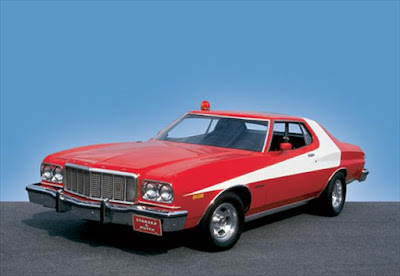 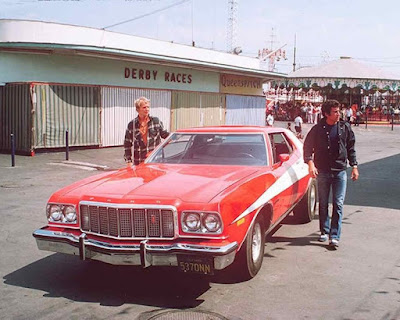 Starsky and Hutch chased criminals around fictional Bay City, CA for 4 seasons from April 30, 1975 –May 15, 1979 and throughout practically each and every episode it was David Michael Starsky's Two-door Ford Gran Torino that was pretty much the star. This bright red vehicle with a large white vector stripe running down both sides was nicknamed by Starskey "The Red Tomato" in the episode Snowstorm. What a cool car — Almost as cool as their informant Huggy Bear. 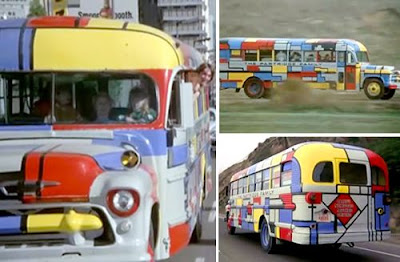 A school bus would normally have been an uncool turn-off to any kid, but this particular bus not only had a modern art, Piet Mondrian inspired paint job, it set off on cosmic adventures with passengers that were a loving family turned rock band. Oh yeah, and the big sister was Susan Dey... 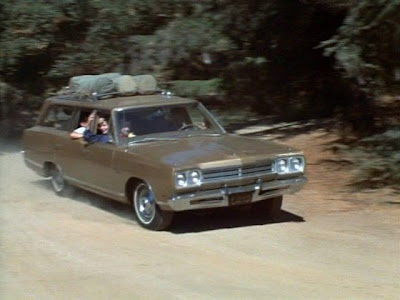 What's not to love about this 1971 Plymouth Satellite station wagon?

The Brady's were a loving, close family that used the car to set off on not so cosmic adventures, but then again, one of the passengers was Maureen McCormick as Marsha Brady, so that made it all the more groovier. 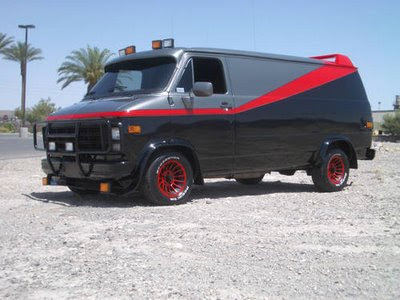 No it wasn't a Chevy van, but instead a black and metallic gray 1983 GMC van, one of six used on the show.

Inside, items such as a printing press, mega surveillance equipment a plethora of Hannibal's disguise kits, and a bad azz mofo named Bosco "B.A." Baracus a.k.a. Mr. T., made this van one for the ages.
on October 07, 2013