ALL IN A LATHER: The Ritual Of Straight Razor Shaving Revealed!

ALL IN A LATHER:

It's something I choose to do everyday, and yet, it is also something that everyday fills me with reluctance, dread and contempt—shaving my face.

There once was a time of youth where I could not wait for the day I could imitate my father who, his entire life spent beardless, would repeat his daily and seemingly magical ritual using strange instruments and groovy concoctions.
Tools and mixtures that belonged to a craft that had also been fueled by years of seeing the practice worked in popular culture, from Bugs Bunny to The Three Stooges, The Flintstones to I Love Lucy, my pop culture references on shaving were long and deeply ingrained.

For me, the fine art of shaving would at one time seem as desirous as that scene in Mario Bava's Danger Diabolik, where the anti-hero Diabolik swims around atop his bed with his girlfriend in a pool of cash.

Sadly, the reality of years of shaving have never been so sweet, happy, nor fun.

In fact, it has been one of the daily chores of my life that has led me to seek out ways to get a better, less painful and more efficient shave.

Over the decades I have tried just about every new razor that technology has offered up.


Everything from pricey electric models (like an equivalent to buying a stylish new sports car) to the latest multi-bladed, single battery operated, souped-up hot rod version.

Most have walked through my bathroom doorway with great fanfare and left with a humbled, cheap hang-over.

I know that growing a beard was not a solution to not shaving.

I had tried before on several occasions and it never worked out for me. Sure, growing facial hair continues to work splendidly for many folks as it has throughout history, but for myself, after a couple of weeks I always yearn to get back to the blade and the freshly clean, albeit freshly beaten up, feeling that my face prefers.

I did manage to have some fun when I decided to shave off a couple of weeks of beard though, trying different inappropriate looks and usually ending up with a nice Frank Zappa combination, or a creepy Fu Manchu styled mustache.


At other times I would go full speed down the path of horrific absurdity that leads to the finality of a no longer quite so cool Chaplinesque, simple square above the lip. Comedy is not always pretty. 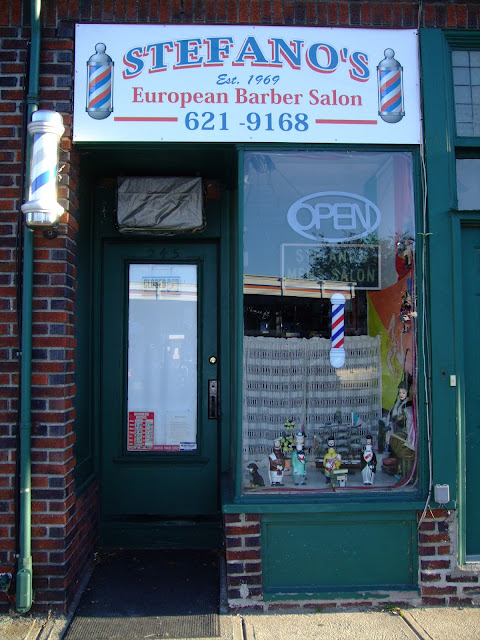 The shop resides a block away from our home. Owned by a Sicilian gentleman, Stefano, who, according to his web site, learned his trade and honed his skills in Southern Italy, arrived on Providence's East Side in 1966, and opened his shop Stefano's European Haircutters and Barber Salon, right near Mystery Box H.Q. in 1969.

Billed as "The Gentlemen's Traditional Barber Shop," it seemed like the perfect location for my first visit to a barbershop in decades, as I also have not visited any type of establishment for a hair cut in as many years.


A bit nervous as to just what was in store for me, assuming he would start in by yelling at me to get a hair cut, just as most of my family had done for years.


I entered the shop and immediately felt relaxed sitting among the bits of vintage memorabilia and standard Barbershop accouterments like the mad scientist-like cylinder containing the classic blue liquid that combs are dipped into a.k.a. the deadly disinfectant, Barbicide.

For Stefano, a man who has probably seen and cut more hair in his career than home runs hit out of Fenway Park, this was just doubtlessly just another day at the office.

He sat me in one of his incredible, traditional vintage chairs, threw one of those white barber's capes over my clothes, fastened it at the neck, and asked me what I needed.

"My first straight razor shave!" I happily pronounced, trying my best not to seem like the complete rube off the street that I imagined I was anyways.

"Why did you pick now to get a shave?" He politely asked, Ah! I was positive now that I was indeed being set up for the hair cut verbal assault.

"I have always heard it is the best shave you can get, plus this was a gift."


I began to feel the vacation begin...

Next came the hot lather. If ever there was an invention that mankind could be proud of next to the automobile or airplane, it would have to be hot lather.


The straight razor itself was prepared on a stropping leather belt which is done by a barber before every shave he undertakes—you may have heard of honing, which is the unseen practice involving sharpening the knife on a stone, but stropping, which is usually done in front of a customer, gives the blade that extra-fine edge.

The shave itself was quietly done in tiny sections, with Stefano, utilizing what seemed like a surgeon's delicate finger technique, would tug a small area of skin and use short strokes.


As he went about his work, I drifted into a sea of calm relaxation. What probably took around ten minutes seemed like a long stroll in the gardens of Downton Abbey.

Once finished, Stefano worked a bit of soft talc onto my newly shaven face with little fanfare. 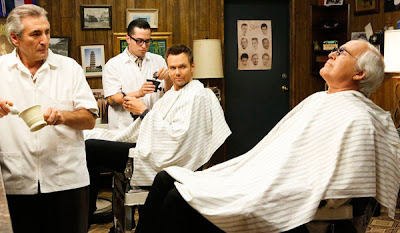 The cost of the shave was $20 but let me also give you this bit of advice, always remember an extra $5 tip should go to the guy that has held a razor to your throat.

As the old cliche goes, I know felt as if I had a face as smooth as a baby's butt, and with a spring in my step I headed out the door.

Further up the road, Emily, who gave me the gift of this shave, said she spotted a person from a distance happily strutting along.

As she got closer she realized it was me returning home from my special treat.

As she got even closer a look of horror appeared, it seemed I had cheerfully worn one of my fave shirts and I swear it was without really thinking about what it depicted—the three Hanson Brothers, dripping in blood as depicted in the film Slapshot.

Well, at least there was no Sweeney Todd styled ending, and I can honestly say that if you have ever been curious, take the plunge and reward your face with an old fashioned, straight razor shave at a barber shop.

Oh and lastly, there was a time when our friend attempted to wait for her (now teenaged) son as he was getting a haircut at Stefano's shop.

As she sat down ready to flip through one of the many magazines piled up on a table, she was sternly chided by Stefano, "No women! No women!."

At that point an elderly customer arose from his chair and disgustedly stormed out the door. 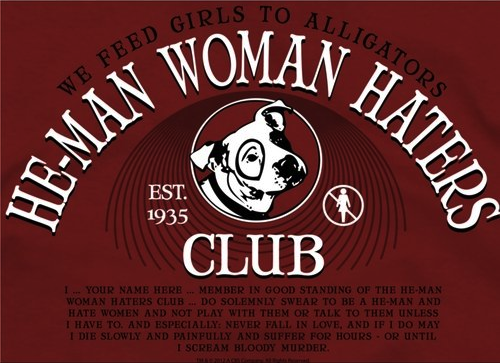 For this piece, I decided to only show an exterior photo of Stefano's shop for fear that I might otherwise be intruding on this secret den of men—one never knows when I might need to return to the precise fingers that have the ability to deliver the best shave I have ever known. 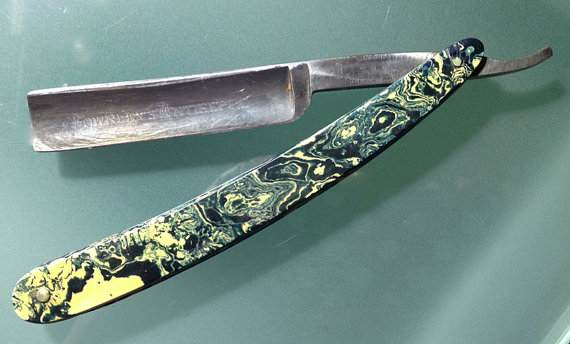 Stefano's Barbershop now has two locations, the original operated by Stefano and his son Nunzio, and a newer location operated by his son, Stefano Angelo.