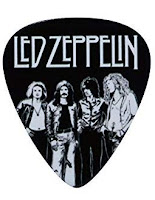 Ah, Ah,We come from the land of the ice and snow,From the midnight sun where the hot springs flow,The hammer of the gods will drive our ships to new lands,To fight the horde, singing and crying: Valhalla I am coming!

On we sweep with thrashing oar, our only goal will be the western shore.

The above is the lyrics to Led Zeppelin's "Immigrant Song" from their third album, 1970's Led Zeppelin III.

It was written by Robert Plant after being inspired by a concert the band played at a college in Reykjavik, Iceland and touring the country, which reminded him of Viking hordes and big ships. Its perspective, as that of the Vikings leaving Scandinavia in search of new lands and new adventures, always left me with the impression that it easily could have been a song about the members of Led Zeppelin themselves.


Always mythologically larger than life, Led Zeppelin swooped down and conquered everything, as if they themselves were the Viking horde, or even better yet, supernatural Asgardians on a fantastical mission.


Led Zeppelin, through their complete run of 1968 to 1980 and nine albums, involved four musicians that locked together and grooved on a musical wavelength that transcended what had been done before, and doubtlessly will ever be achieved again.


They perfected the art of a rock band.


A blues based, heavy, blow your mind into the clouds rock band. 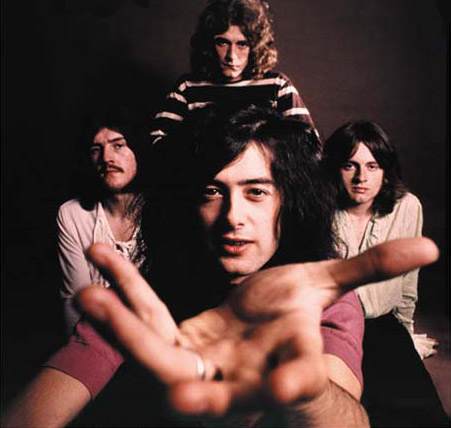 Mere human beings are just not able to pull it off the way these guys did. Heck, even The Beatles had their problems.


At my youngest age of listening to, and examining Led Zeppelin, there was something about the band that charmed. Something that was different and more mysterious than any other band operating at the time. Perhaps only Pink Floyd also had this aura of the inexplicable, but I always had an inkling that behind the Great and Powerful Oz that was Pink Floyd's curtain, there were still some clever art student stoners who formulated their ideas at a local pub.


Not so Led Zeppelin.


Decades before the video game Skyrim existed, I felt as if founder/guitarist Jimmy Page had wandered some bleak wintry mountains on a quest in search of the perfect alchemical potion that would enable him to craft a super rock and roll group for the ages.


Of course, it didn't hurt that the factual surroundings of the band included a bit of a cultivation of a mystique that included few to none interviews, little access to the musicians, tales of weird occult fascinations, and songs that conjured up ancient Celtic lore and old spooky blues songs—real Robert Johnson making a pact with the Devil at the Crossroads—mojo type of blues stuff.


Brush aside the hyperbole and the smokescreen and still, Led Zeppelin's origins and history are the stuff of legend.


Pre Led Zeppelin, in the early to mid sixties, Jimmy Page had been an in demand session musician. One of his many recordings included playing guitar on a #1 single called "Diamonds" by Jet Harris and Tony Meehan in 1963. Among the many other sessions he played on, were tracks by The Who, The Rolling Stones, Joe Cocker, The Kinks, Brenda Lee, Van Morrison and Them, on Donovan's Sunshine Superman album and Petula Clark's huge "Downtown" single. Page was recording up to three sessions a day and over fifteen a week.

Jimmy Page was a member of the stellar British band The Yardbirds towards the end of their run, first as the bass player and then sharing twin lead guitar time in the band with fellow guitar great Jeff Beck. He originally was asked early on to replace Eric Clapton but declined.


The Yardbirds with both Jeff Beck and Jimmy Page was extremely brief with only a few recordings, but they did appear in a memorable cameo for Michelangelo Antonioni in his film Blow Up, always on the list on my fave films. Originally, Antonioni wanted Eric Burdon, then The Who, then The In-Crowd featuring Steve Howe (later of Yes). After all could declined, the choice was to be The Velvet Underground, who were set to do it, but could not obtain the proper U.K. work permits, so it finally came down to The Yardbirds, with Jeff Beck smashing his guitar to emulate Pete Townshend's early Who antics. 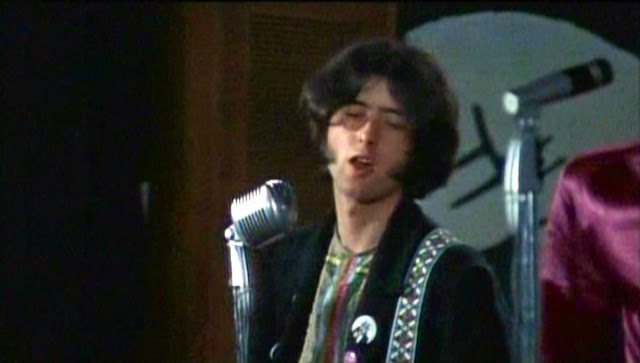 Page was going then to form a supergroup with Jeff Beck also on guitar, The Who's John Entwistle on bass and Keith Moon on drums. The lack of a vocalist and contractual problems made the group tough to pull off. Though a few variations exist on the story, Keith Moon said the band would go over like a lead balloon. John Entwistle then said a Lead Zeppelin.


With only Page and bassist Chris Dreja left of The Yardbirds, Page recruited vocalist Robert Plant of Band Of Joy, and then at the urging of Plant, Band Of Joy's drummer John Bonham. Dreja dropped out and bassist John Paul Jones, who had known Page from session work. At the suggestion of Jones' wife, he inquired about joining the band. 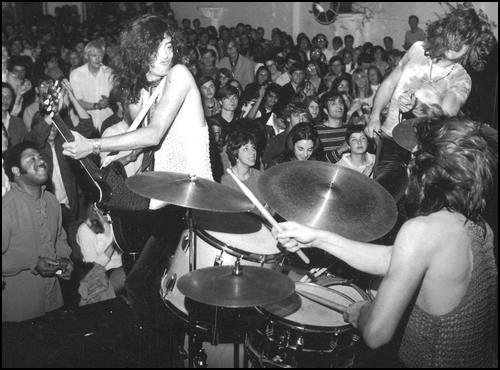 The quartet clicked immediately. They fulfilled a Scandinavian concert obligation as The New Yardbirds, but had to change the name after the tour was completed. Page returned to the joke made by Moon and Entwistle on their aborted supergroup. The band's manager Peter Grant thought fans might pronounce Lead "Leed" and suggested "Led."


Mostly on the suggestion of singer Dusty Springfield and without ever seeing them (!), Led Zeppelin were signed for the then unheard of sum of $200,000 by Atlantic Records. Jimmy Page had recorded Led Zeppelin I quickly and at a low cost, having played the material on tour already. On the basis of the tapes, Atlantic Records was knocked over gave the band complete control over everything from cover art, what songs to release, touring and promoting the band. 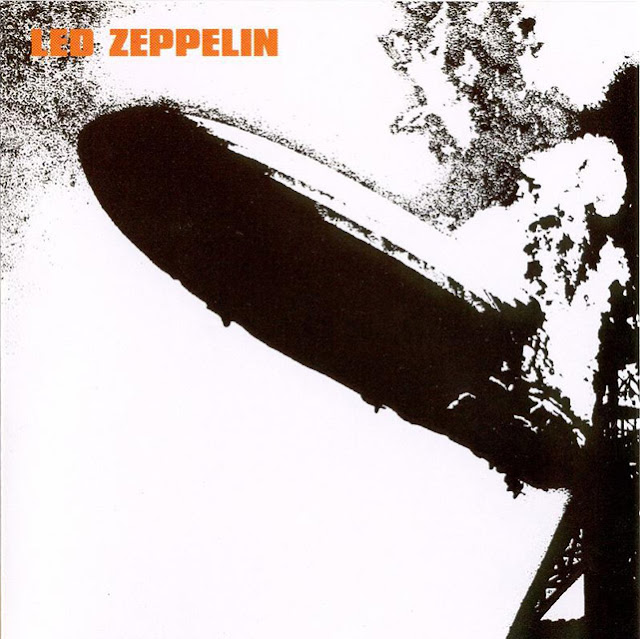 Using these gifts, the band surrounded themselves with a cloud of stardust and a chemistry for making music that was truly a gift of the muses.


This just does not happen in real life my friends! 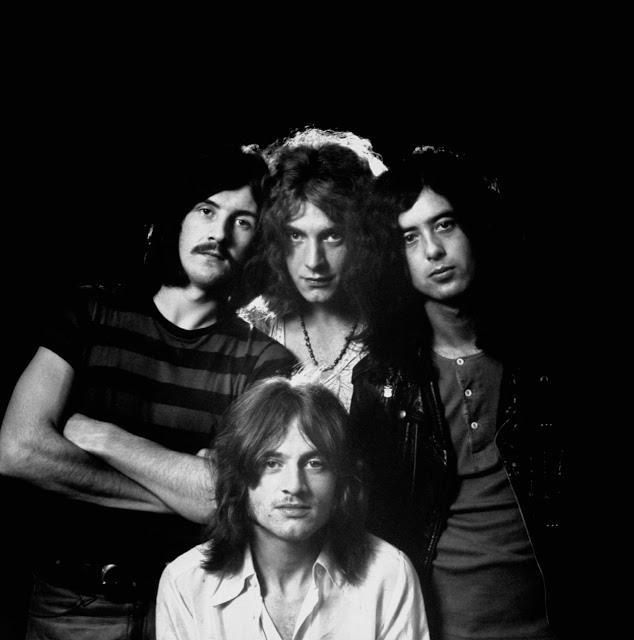 Year after year, album after album, Led Zeppelin became the group of The Seventies. The four musicians, vocalist Robert Plant, guitarist Jimmy Page, bassist/keyboardist John Paul Jones and drummer John Bonham created a near perfect discography of incredible studio albums, sell out live tours, an everlasting huge fanbase, and although some may argue with me, an original and highly entertaining in-concert fantasy film that has always given me a maximum rock thrill.


Then, with the accidental death of drummer John Bonham in 1980, the band decided they would go on no more. 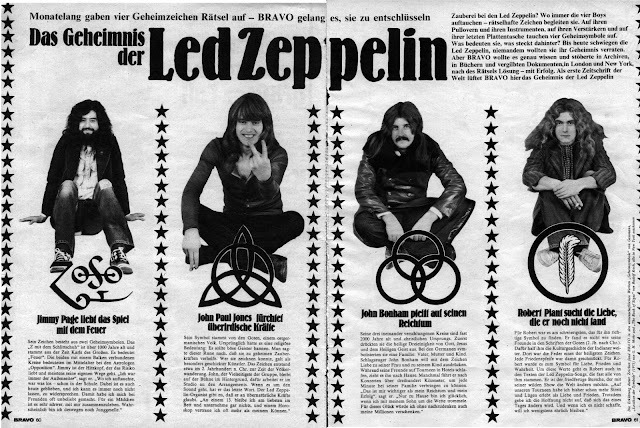 A December 1980 press statement stated that, "We wish it to be known that the loss of our dear friend, and the deep sense of undivided harmony felt by ourselves and our manager, have led us to decide that we could not continue as we were", and it was simply signed "Led Zeppelin." 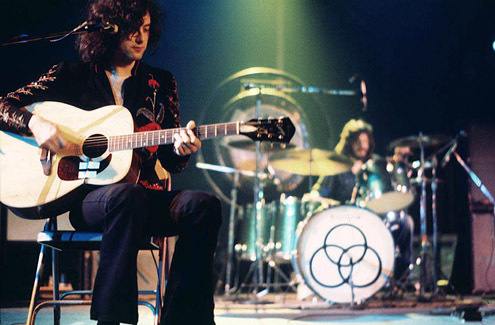 Unlike some bands, that keep the gravy train a-rollin' even though they no longer even contain one original member, this was was an admirable and smart decision, and one that sealed their legacy forever.


So how could Led Zeppelin put a cap on a career that was so profoundly exquisite, one which ran at a nearly 100% quality control standard before losing one of their four key elements which they determined made it impossible to go on?


1982 saw the release of the Coda album. A collection of a couple of live tracks and some unused outtakes.


In 1985, Plant, Page and Jones reunited for Live Aid, although they did not call themselves Led Zeppelin, it was hyped as a Zep set. they added drummers Phil Collins and Tony Thompson and bassist Paul Martinez who had played with Plant in the early Band Of Joy. The performance was poorly rehearsed, and the three felt it highly unsuccessful.


When Atlantic Records' President and founder Ahmet Ertegun passed away in 2006, the band decided to do a one-off official reunion concert for the Ahmet Ertegun Tribute Concert Benefit held on December 10th, 2007 at  London's massive O2 arena.


A champion of so many legendary musical acts, Ertegun, since the very beginning, took Led Zeppelin under his label's wing, and was almost like Led Zeppelin's babysitter, with his undivided loyalty to the group from the start and through many a trashed hotel room incident.


According to vocalist Robert Plant, this was to be his final show with Led Zeppelin, period.


Finally with the idea that this truly was the last great concert that Led Zeppelin would do, the band rehearsed and arranged to have a film director capture the show. 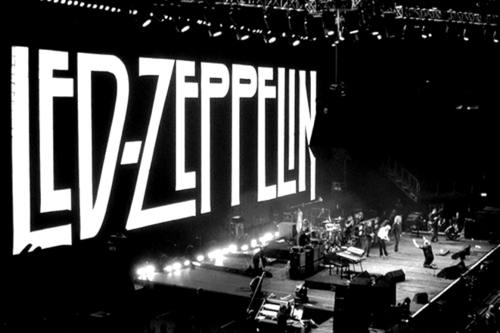 With a 16 camera set up, Director Dick Carruthers managed to capture magic, as the band, once more with Jason Bonham as drummer, performed a stellar magical 14 song set with two encores, that reminded everyone why Led Zeppelin has always arguably been the world's greatest rock band ever.


The musicians were mining sacred territory, but there it was, the golden sound once again. Robert Plant's vocals may not be leaning towards the highs of 30 years ago, but his lower register, prowling voice compliments the material in a way that almost makes more sense now, since from the start the band was so heavily influenced by the older early American blues musicians like Muddy Waters, John Lee Hooker, Blind Willie Johnson, Willie Dixon. 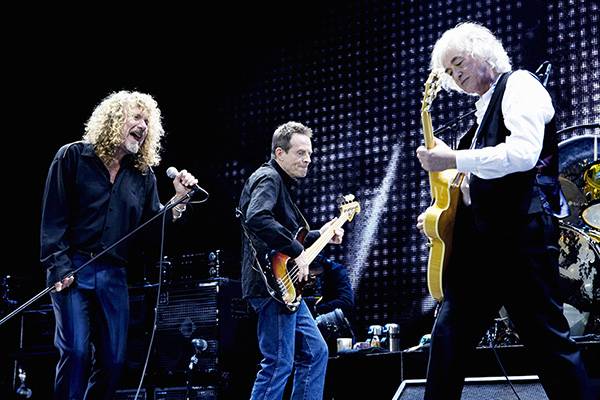 The show, which sold out in seconds, had over 20 million people trying to purchase tickets and earned a Guinness World Record for "Highest demand for tickets for one music concert".

It took a few years, but recently released to unanimously positive reviews  has come the film Celebration Day, playing theatrically around the world. Also now Celebration Day been released in a variety of formats: from downloads, a 3 LP vinyl set, to Blu-ray, DVD, CD and some sets with an extra DVD of an early rehearsal the band had filmed. 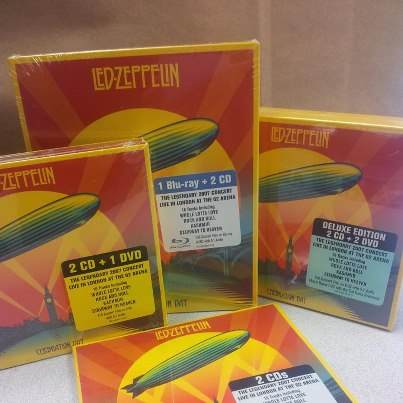 The entire event was pulled off as a success—one last grand celebratory reunion concert, that didn't falter or come off as just the usual cash cow.

Few bands of the stature of Led Zeppelin would ever have done a reunion concert like this with just the four playing alone, instead they would have piled on additional musicians and massive overdubs to sweeten the sound.


As a beautiful cap to the story of Led Zeppelin came recently when the three members were awarded Kennedy Center Honors by President Obama.


There alongside the other 2012 Honorees, David Letterman, Dustin Hoffman, Buddy Guy, and ballerina Natalia Makarova, were Jimmy Page, Robert Plant and John Paul Jones presented with the highest award the United States gives out for artists' lifetime contribution to America through the performing arts.


The President's speech for Zep was very funny and referenced their reputation for trashing hotel rooms and their "Rock and Roll lifestyle" debauchery.

A few days later, in a brilliant move, fellow Kennedy Center Honoree, David Letterman (who at the ceremony claimed his award must have been an error in the bookkeeping department) had Led Zeppelin on The Late Show with David Letterman as his featured guests.


For almost the entirety of Dave's show, as non-performance guests, the trio joked and answered questions about their legacy.

Surprisingly, for any Led Zeppelin fan, it was not Robert Plant or Jimmy Page, but instead John Paul Jones who sat next to Dave, and it couldn't have worked out better for the show.


Although throughout his career, bassist/keyboardist John Paul Jones may have been the underrated, under- appreciated and quiet member of Led Zeppelin (even though his contributions were extraordinarily important to Led Zeppelin), on Letterman's show he shined and brought laughs to Dave and the audience.


After Dave repeated this quote, John Paul Jones wittily replied, "You missed the bit about Vikings having sex with Hobbits."