What's Inside The Mystery Box?


WHAT'S INSIDE THE MYSTERY BOX?

Hello and welcome to The Robert Jaz Mystery Box!
What's in store with this first column? Well, only some groovy graphics and a small back story. I enjoy introductions, formalities, a little pleased to make your acquaintance...or as I would really like to think of this - an apéritif.

The Mystery Box is a gimmick that has been used by savvy magicians throughout magic's history as a catchall trick which could vary in design, presentation and purpose. We are all enticed by both what is in, and what could possibly be pulled from "the box". Similarly, I've used The Mystery Box for several projects I've worked on over the years. Having never been comfortable in my life with pigeonholing or staying within one medium, category, or theme, and like my own interests and collection of pop culture ephemera - I'm more than happy to once again provide this catchall title to my ever growing morass of tangential discoveries, interests and findings from either the here and now or the historically fantastic past. In other words...Huzzah! 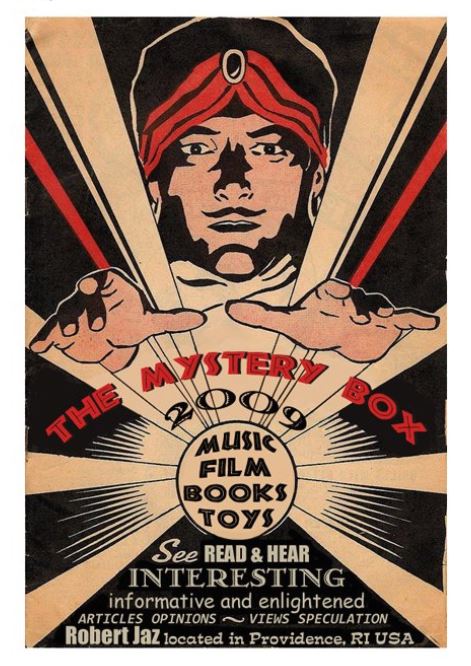 
I once hosted a weekly film series which I called The Mystery Box Film Festival. While this was a weekly series and not actually a festival as usually assigned to film gatherings, I merely wanted each once-a-week showing to be a very very special EVENT (secretly, I also liked confusing people while getting a grant for it). At the same time my film selections were freed up to be whatever I felt like showing - from the often dreaded contemporary "critically acclaimed," which usually meant a dreary turnout and equally depressing pretentious film, to fantastic silent greats; schlock z grade nonsense (huge turnouts); student Godard wannabes from the nearby universities (ok, huge turnouts but everyone was unhappy by the end of the evening); vintage comic book serials (Ford Beebe anyone?) and subtitled surreal masterpieces such as a personal fave, Bunuel's Simon of the Desert. Like the, now fewer and fewer, original repertory arthouse cinema, we all had variety, laughs, a low budget education and an all around great meeting place to exchange creativity with our fellow punters.

In another use of The Mystery Box, while I was I working at a weekly free arts and entertainment newspaper, I used the old "grab bag" idea which I loved from childhood. My dad would come home from work with a simple unmarked paper bag he'd bought at a large area department store - usually around the holidays - and give me a few per week. These bags often held small toys, candy and other cheap novelties, but the thrill of not knowing what would be in one and receiving such an unknown, really filled me with immeasurable delight. For my newspaper Mystery Box project, I ran a weekly ad attached to my column, which said that if a dear reader would write to me or send me anything they wanted - creatively speaking that is - I would return to them a large envelope judiciously filled with things: rubber stamp art; doctored photos; trinkets and goofy thank you letters. This proved to be a very fun and rewarding experiment for senders on both sides that never led to any hatemail, bad vibes or distasteful mail. I also recently became friends with someone years after the fact, that sent in to me as a kid for the freebies, and is now accomplishing many great artistic things as an adult - well, I'm just glad they finally erased my name off their chalkboard that reads "Cheap Bastards of My Youth: Who to Whack Next."

It is with a fondness for these past forays that I will now be continuing my newest Mystery Box in column form for this site. I will as always, unpredictably open this grand and decorously laden box, dip in, and pull out anything that seems worthy of sharing. I will also attempt to make wisps of smoke appear magically from my fingertips and infuse some guffaws, snickers and and/or chortles into my writing only because I really enjoy the words guffaw, snicker, and chortle.

Due to the rapidly speeding by nature of writings on a site such as this, I will also attempt to create columns or entries that can be easily accessed from my side link and hopefully ones which will still be of some interest long past their sell by date. Please feel free to post comments, or contact me either at RobertJaz@gmail.com or through this fine site.

Many thanks to you for reading this.
Til next we meet again, and in the words of the great Groucho Marx, "Those are my principles. If you don't like them, I have others". 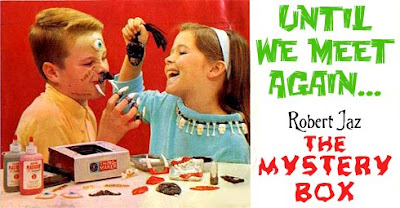